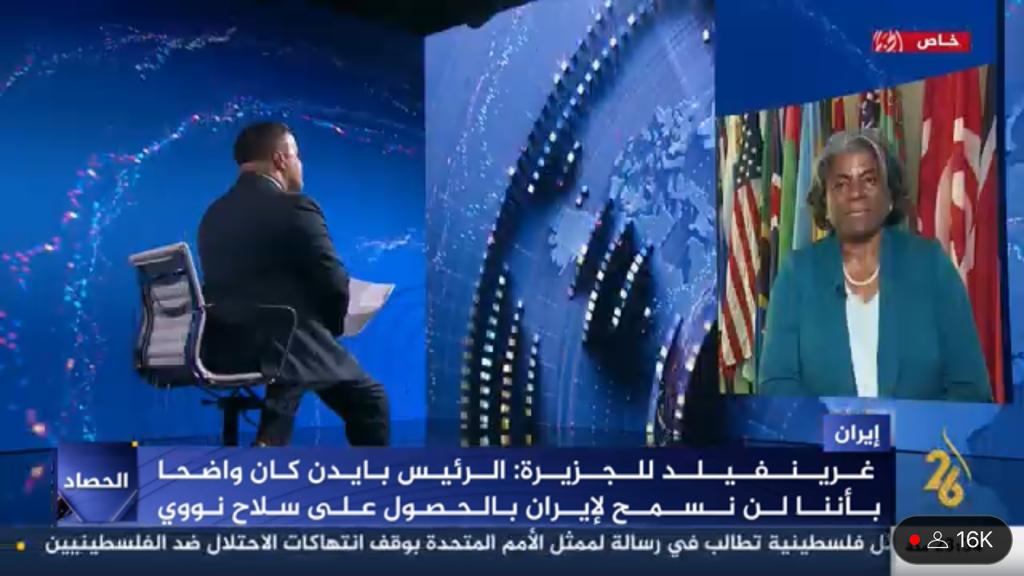 AMBASSADOR LINDA THOMAS-GREENFIELD: The world and Iran heard the 15 countries of the Security Council speak about the situation on the ground in Iran. We wanted to speak not just to the Iranian government to let them know that their actions are being condemned. But we also wanted to speak to the protesters on the ground, to let them know that they have the support of the world as they fight for their human rights against what has been a brutal attack on peaceful demonstrators.QUESTION: (Translated) And did you reach this goal through the holding of this meeting?

AMBASSADOR THOMAS-GREENFIELD: We achieved that goal in this session. Absolutely. We were able to bring all the countries to bear. They heard from the Special Rapporteur of the United Nations. They heard from two civil society individuals who expressed their strong views and their strong support for the demonstrators. And they heard from countries in the room their concerns about the situation on the ground in Iran. So, we did accomplish our goal.QUESTION: (Translated) Tehran called for the boycotting of this meeting and accused you of attempting to politicize a humanitarian body.

AMBASSADOR THOMAS-GREENFIELD: I did hear that Iran made that call and discouraged people from attending. But we did have a room full of attendees and we also made clear that their statement – it has no basis in fact. The demonstrations are clear. Press is reporting what they’re seeing on the ground. We’re hearing from Iranian citizens, as they are able to sometimes communicate with the world. So, the goals were achieved, and I certainly am not surprised that Iran would discourage people from attending but they clearly failed in that attempt.QUESTION: (Translated) A spokesperson for the Iranian Foreign Ministry said some days ago that Washington has not learned from its previous mistakes and that what you are doing now is an attempt to compel Iran to make more concessions in relation to the Iranian nuclear deal.

AMBASSADOR THOMAS-GREENFIELD: Right now, we’re not focusing on the nuclear deal. We’re focusing on the fact that demonstrators are being attacked in the street. We’re focusing on the fact that the Iranian government is providing arms to the Russian government in their unprovoked attack on Ukraine that is hitting civilians and destroying civilian infrastructure. The Iranians know what they have on the table. President Biden has been clear that we will not allow Iran to obtain nuclear weapons and that we are prepared to find a way forward diplomatically. And that’s the position that we are in right now.QUESTION: (Translated) But here again, the Iranians accuse Washington of providing direct support to the protestors in Iran and that through that you want to pressure the Iranian side and they say that you have not learned from previous mistakes. And they point to the fact that they responded to your sanctions with sanctions of their own.

AMBASSADOR THOMAS-GREENFIELD: The protestors on the streets in Iran have spontaneously gone to the streets to protest the horrific killing of a young woman who was arrested by the morality police, put in jail and, three days later, she was in a coma, and she died. And they are protesting that. These protests are not about the United States. They are about what is happening inside Iran. And people are fed up with the situation where they are constantly being barred from their freedoms. So again, this is not about the United States. We absolutely support the protesters, but the protesters themselves have taken to the streets and are protesting their own government’s attacks on them.QUESTION: (Translated) Ambassador Thomas-Greenfield, we stay with Iran but in a different geographical area. With regards to the war in Ukraine, you have accused the Iranians of supplying Russia with drones – and I hope you can hear me well. The Iranians deny this, so why are you convinced that Iran is indeed supplying Russia with these drones?

AMBASSADOR THOMAS-GREENFIELD: Of course they are denying it, but there is evidence that they are providing these drones to the Russians. There is no question about that. The evidence is there. And any denials on their part are just that: they’re lies. We know that they’re providing these weapons, and the rest of the world know as well.QUESTION: (Translated) When dealing with a problem as big as the one happening in Ukraine, the questions are raised once more about the role of this organization, the United Nations, in a thorny issue such as this one. What is the role of the United Nations in ending what is happening in Ukraine?

AMBASSADOR THOMAS-GREENFIELD: Well, thank you so much for asking me that question. The United Nations has been strong in responding to the situation in Ukraine, the Security Council has condemned Russia, the General Assembly by vote of more than 140 votes condemned Russia. And again, they condemned Russia’s annexation of territory taken by Ukraine. The Russians have been isolated at the United Nations and they have been roundly condemned for their actions. We are also working with other countries in the world to continue to ramp up the pressure on them to push them to make the right decision, which is to pull their troops out of Ukraine and end this horrific war against the people of Ukraine.QUESTION: (Translated) But when we talk about international bodies within the UN, and specifically about the UN Security Council – the strongest body in the organization – there is a veto and thus how can this organization and especially the Security Council be decisive and effective in such a file while some parties who are active on this file have veto power?

AMBASSADOR THOMAS-GREENFIELD: Well, we can’t change the fact that Russia has the veto right. But I can say clearly that their veto right does not extend to their vetoing the voices of 14 members of the Security Council who have all, in various ways, condemned their actions in Ukraine. They cannot veto 141 votes in the General Assembly. And they cannot veto the voices and the real commitment of the Ukrainian people to defend themselves. So, while they do have a veto right, that veto right has not protected them from isolation and condemnation.