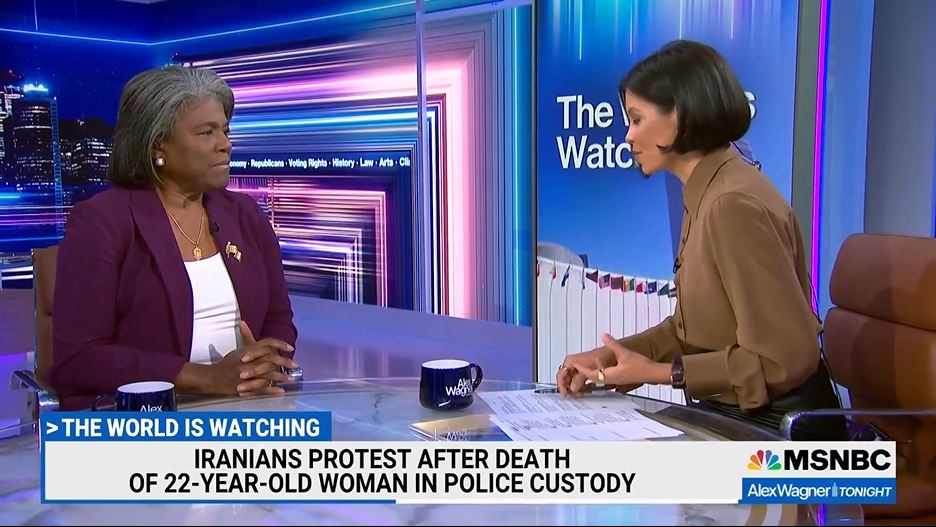 QUESTION: Madam Ambassador, thanks for joining me on set.

AMBASSADOR LINDA THOMAS-GREENFIELD: Thank you for having me.

QUESTION: On this busy, busy week. Let’s just start first with the sanctions that were announced today. There are so many sanctions on Iran at present. What is the goal here in terms of really moving the needle and supporting these protesters?

AMBASSADOR THOMAS-GREENFIELD: First and foremost, it is to hold accountable those individuals in Iran responsible for committing human rights violations, and this is truly a horrific violation. The killing of Amini – the blocking of individuals from their ability to protest in the streets. Every Iranian should have the right to protest. And every woman in Iran should have the right to wear what she wants to wear without having to justify themselves to these morality police.

QUESTION: For people who don’t follow Iran closely, I think it bears mentioning that protests like this do not happen often in this country. The last time we saw something like this, widespread protests – was in 2009 – 13 years ago. Does the U.S. see these protests as meaningful or indicative of a restive of population and maybe something more, greater, down the line?

AMBASSADOR THOMAS-GREENFIELD: Absolutely. People are frustrated. They are angry. Their ability to be themselves – that has been suppressed by this government and by the morality police. So this is significant that this is happening at this time.

QUESTION: It is a time of protests around the world. And there are large scale protests also unfolding in Russia, due to President Putin’s recent announcements. You are in town for the UN General Assembly. I know that Sergei Lavrov, is there – your Russian counterpart. You announced, I think before the General Assembly even started, you said “there are no plans at this time to have meetings with the Russians, they have not indicated that they have an interest in diplomacy.” Can you explain the strategy there a little bit?

AMBASSADOR THOMAS-GREENFIELD: Well, first and foremost, the Russians need to understand that this is not going to be business as usual for them. They have attacked their neighbor. They have attacked the core, the soul, of the of the UN Charter. They have attacked all of our values. So we don’t want to treat them, even though they are a permanent member of the Security Council, they are not behaving with the responsibility that we would expect of a permanent member of the Security Council. So until they can show – until they withdraw their troops from Ukraine – they don’t deserve to have any recognition that things are normal.

QUESTION: Is there talk on the Security Council of taking any punitive measures against the Russians?

AMBASSADOR THOMAS-GREENFIELD: Well, we certainly have already. They have been roundly condemned. That condemnation continues. We are stronger than we ever were before in terms of the European Union, NATO. All of this was not part of Putin’s plan, I think he thought that we would start to fray around the edges very, very quickly. And we’re much stronger as an alliance now than we ever were, and that alliance has really imposed strong sanctions on the Russians, and they’re feeling those sanctions.

QUESTION: I just wonder – because you’re all in this conclave this week – have you talked to your Indian or Chinese counterparts about this? Because in recent weeks, Prime Minister Modi and President Xi Jinping have come out and been critical of Russia. Are you following up on any of those criticisms with your Chinese and Indian counterparts at the United Nations?

AMBASSADOR THOMAS-GREENFIELD: It just happened last week that both China and India – their presidents – expressed their strong concerns to the Russians – we are in the Council for the first time today. And I thought that their statements today were very measured. They were not in any way pro-Russia. So again, this –

QUESTION: So that’s as good as being almost anti-Russia, the fact that they’re not pro-Russia?

AMBASSADOR THOMAS-GREENFIELD: They certainly – they did not condemn Russia in the same way that other members of the Council did, but they certainly expressed their concerns about the consequences of this unprovoked war on the Ukrainian people.

QUESTION: When we talk about that unprovoked war, how do you think of what Putin is doing? We talk about needless, senseless death, both Russian and Ukrainian. There are people who are comparing – I think that it’s the International Criminal Court prosecutor Karim Khan. He spoke to the Security Council today and said, “the echoes of Nuremberg should be heard today.” Should we be thinking about Vladimir Putin in the way that we think of Adolf Hitler?

AMBASSADOR THOMAS-GREENFIELD: We certainly should look at what he’s doing in the same way we saw the beginnings of what Hitler was doing. He has built a strategy around destroying a country. Destroying a people. Human rights violations have been committed. Sexual violence against women. People have been tortured. We have seen signs that war crimes are being committed. And we’re working with the Ukrainians, with the International Court of Justice, the ICC to collect evidence so that when the time comes to hold those who committed these crimes accountable, we have the evidence and we’re ready.

QUESTION: So you’re hearing the echoes of Nuremburg too, it sounds like?

QUESTION: Linda Thomas-Greenfield, U.S. Ambassador to the United Nations. What a time to be convening the world body. Thank you so much for your time and service. Thanks for joining me on the set.