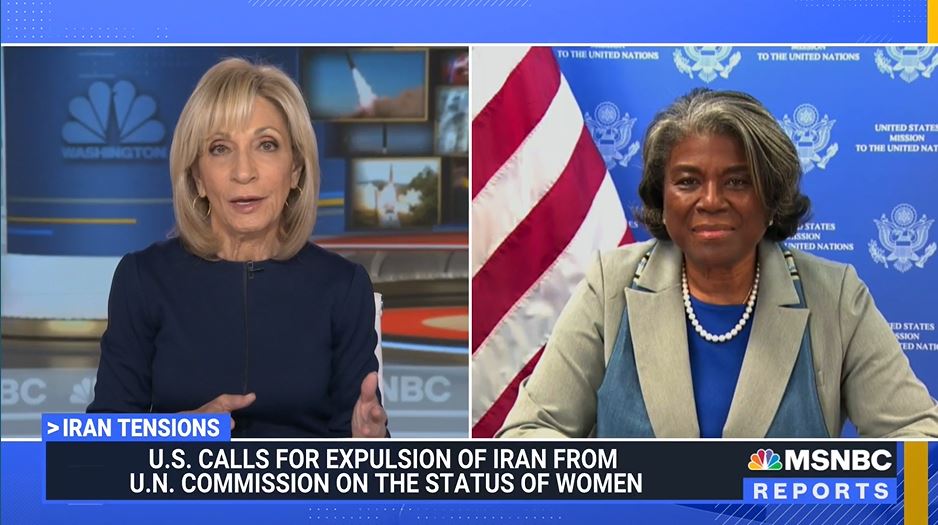 QUESTION: Joining me now is the United States Ambassador to the United Nations Linda Thomas-Greenfield. Madam Ambassador, it’s good to see you. Thank you very much for coming.

QUESTION: I want to talk to you about your efforts on Iran, to remove Iran from the UN Commission on the Status of Women.

But first let’s talk about North Korea, because overnight there were more missiles, and the U.S. is condemning the missile launches, but the UN has not been able for years now, really, to enforce any of its resolutions against these launches. North Korea is heavily sanctioned, as you know. Isn’t China – as well as Russia, but China – now part of the problem, not enforcing the sanctions and not doing anything to put the brakes on Kim Jong-un?

AMBASSADOR THOMAS-GREENFIELD: Well, let me just say again: we do condemn these actions. They have fired over 50 missiles in 2022 alone, and they are breaking multiple Security Council resolutions. These are resolutions, Andrea, that we and the Chinese and others worked together to put on the books against the DPRK. But most recently, China has not joined us in condemning these actions and our efforts to add more sanctions onto the ones that we already have on board.

So we really do need to ramp up our efforts so that the DPRK gets the message that what they are doing is unacceptable. We will be having a Security Council meeting tomorrow to bring this before the entire Council. We’re working closely with our Japanese and Republic of Korea colleagues also to ensure that the DPRK does not think that this is something that is acceptable.

QUESTION: Won’t you run into a roadblock from Russia and China there?

AMBASSADOR THOMAS-GREENFIELD: We have in the past. This is beyond – really beyond the pale, what the DPRK has done over the past – over the past week. Our hope is that we can bring them on board. But again, I’m not naïve, but we will do our best.

QUESTION: Now I want to turn to Iran. We’ve seen the powerful images of these protests across Iran – not just women, led by women, but men, the oil workers getting into it, the unions. You want Iran expelled from the UN Commission on the Status of Women. How would that be accomplished?

AMBASSADOR THOMAS-GREENFIELD: Well, first let me just say yesterday we hosted a – what’s called an Arria-formula meeting that brought together a large number of Member States, including the 15 members of the Security Council, into a meeting where we really amplified our concerns about what is happening, the brutal attacks that this government has been imposing on women, and we also wanted to send a strong message to the women and as well as the men who are protesting that the international community is listening to them, that we are – that we support them.

I announced yesterday, following the Vice President’s announcement, that we will seek to have Iran removed from the CSW. We don’t think that it is appropriate for a country who violates the human rights of women to be on such a council. So we will be working toward that over the course of the next few weeks, working with all of our colleagues who are also members, many of whom joined us in this call to see that we have them removed from the council.

QUESTION: I do want to ask you about Ukraine. First of all, there’s a new poll from The Wall Street Journal showing that 30 percent of Americans think that we’re doing too much to aid Ukraine, and that includes 48 percent – 48 percent – of Republicans. Now, given the midterms and the strength of the – at least in the polls of the Republican Party, possibly that they might take over the House and even the Senate, how concerned are you that the popular support in the U.S., the political support to continue funding at these levels is going to be diminished, especially given inflation and problems here at home?

AMBASSADOR THOMAS-GREENFIELD: Andrea, right now we have bipartisan support for our actions and our activities related to Ukraine because we all understand that this attack in Ukraine is really an attack on all of the values that we stand for. It’s an attack on the UN Charter. It’s an attack on human rights. And the Russians are committing crimes against humanity – they’re committing war crimes in Ukraine. And the Ukrainian people are fighting on all of our behalf because what Russia is doing in Ukraine today could be done elsewhere tomorrow.

So I believe that the American public do accept and understand why it is so important that we continue to support the Ukrainian people’s efforts to defend themselves against this brutal attack by the Russians. We are hoping over the course of the coming weeks and months that the Russians will come to their senses and pull their troops out of Ukraine and end this brutal war and go to the negotiating table to work out their differences with the Ukrainians at the negotiating table. We have pushed for that. We tried to support that before Russia made the move inside of Ukraine. They would not accept a diplomatic solution to deal with the security concerns that they say they have.

QUESTION: Do you think that, in terms of Russia and Vladimir Putin, would there be some value if the President would meet with Vladimir Putin at the G20 to discuss the possibility of getting Brittney Griner and Paul Whelan back home?

AMBASSADOR THOMAS-GREENFIELD: Well, as you know, the President had an interview earlier in the week and said that for that purpose, he would be willing to meet with Putin and just to say that the President – this is one of the highest priorities that the President has. Every single member of the Cabinet, this is a priority for us that we bring every American, including Brittney Griner, home to her family. And I know that efforts will continue to be made to do just that.

QUESTION: Well, Ambassador, I know you’re very busy, and we will follow all of your efforts at the UN on all these subjects, especially the Iranian women, those valiant women that you’ve been fighting for. Thank you so very much for being with us today.

AMBASSADOR THOMAS-GREENFIELD: Thank you, Andrea. It was great to be here with you.