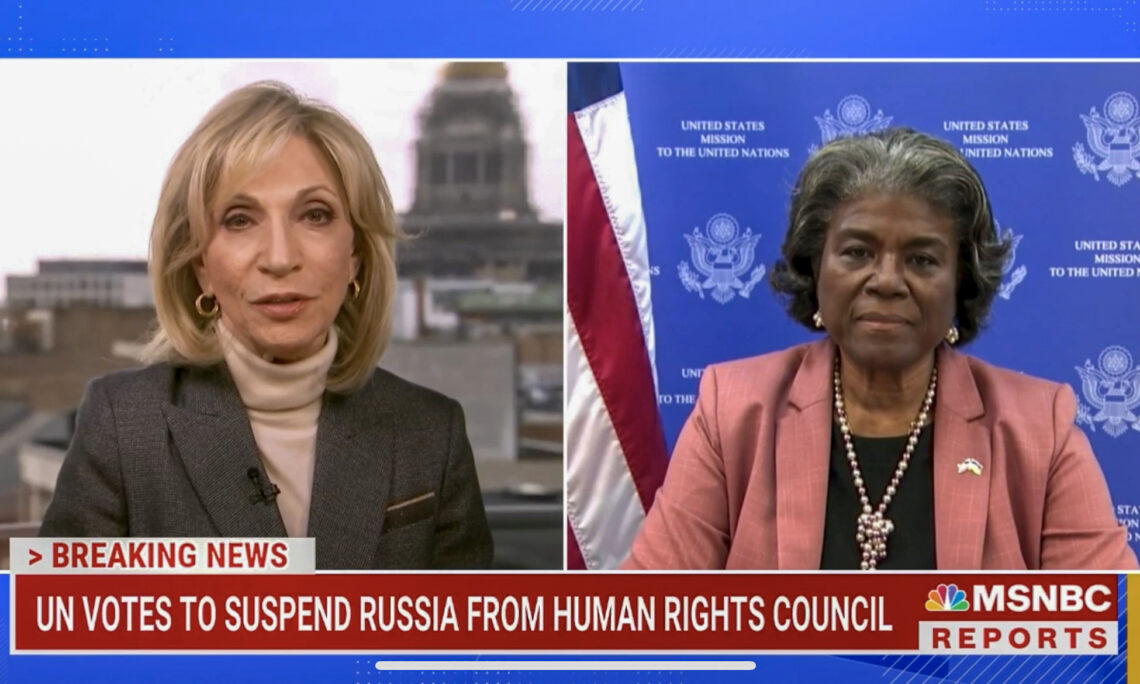 QUESTION: Joining us now is the U.S. Ambassador to the United Nations, who led the way at the UN General Assembly today in that historic vote, 93 to 24, with 58 abstentions, voting to suspend Russia from the Human Rights Council. Ambassador, thank you very much for coming over to be with us today.

QUESTION: I know you have a very busy schedule and are speaking there, momentarily. But tell us why this was an important vote.

AMBASSADOR THOMAS-GREENFIELD: Well, certainly you said it, Andrea, it was historic. It was unprecedented that the General Assembly voted to suspend a Permanent Member of the Security Council from the Human Rights Council. And it really was extraordinary. Sitting in the room and hearing Ukraine make that appeal to all of the members of the General Assembly and being able to come away with that extraordinary vote. And you may have heard yesterday, the Russians were threatening countries if they abstain or if they voted for this resolution. And so many countries voted for the resolution and we were successful in again, isolating Russia, condemning Russia, and supporting the people of Ukraine.

QUESTION: Ambassador, do you think that what was revealed in Bucha, and President Zelenskyy’s address to the Security Council, the video, that graphic video, did that animate the debate today?

AMBASSADOR THOMAS-GREENFIELD: It certainly did. Every single person who spoke, who were in support of this resolution, even many of those who abstained, talked about that video. They talked about the images that they have seen and how extraordinarily unacceptable and horrific those videos are. So again, yes, I think that was something that really influenced the voters today.

QUESTION: There’s a worldwide revulsion as the Secretary was just saying, a global revulsion at what Russia has done, the exposure in their withdrawal and its retreat, but it’s temporary. But the description that he just delivered and that, of course, we heard from Ukraine’s Ambassador to the United Nations in your debate today, there’s just graphic descriptions of the horrors that people have been suffering there. But how does it end? Because there’s a lot of talk about war crimes and wanting accountability, but at some point Russia has to be at the table if there’s ever going to be a ceasefire.

AMBASSADOR THOMAS-GREENFIELD: Well, certainly, and right now the Ukrainians are making a real concerted effort to sit down at the table with the Russians to find and negotiate an end to this to this carnage. The Russians have not been negotiating in good faith. The Russians have come to the table, but not been willing to stop the attack on the Ukrainian people. So, we support their efforts to find a negotiated diplomatic settlement to this, but it will not take away what the Russians have already done: the human rights violations, the gross attacks on civilians, the war, the war crimes that we have all seen with our own eyes. That will not be erased even at the negotiating table.

QUESTION: One of the things that they’re finding in the areas around Kyiv are these so-called smart landlines, which are difficult to disarm, dangerous to disarm. It’s a whole new generation of landmines, unlike what we experienced when we were de-mining Southeast Asia and other post-conflict areas. Is there anything that the United Nations can do to try to deal with this problem?

AMBASSADOR THOMAS-GREENFIELD: You know, there is a UN agency that works on de-mining, and we should start to look at how we can assist the Ukrainian people in dealing with these mines because they will be there – punishing and maiming and killing the Ukrainian people for years to come if we are not able to find those mines and remove them. But it also shows that Russia will not leave the situation in Ukraine in a way that will give the Ukrainians any confidence that they can be secure until they sit at the negotiating table. To have left these minds behind shows that they’re not negotiating in good faith.

QUESTION: You heard President Zelenskyy when he was really scolding the UN Security Council earlier in his speech, two days ago, saying, what is the good of the Security Council if it can’t prevent these atrocities, stop Russia from spewing falsehoods from the council table, and not provide peace or security, which are the goals of the UN mission. How does the UN respond to that?

AMBASSADOR THOMAS-GREENFIELD: Now, I have to say I understand his frustration. His country is under attack. And he has the sense that the world is not there. But we are there. We are there, here at the United Nations. We held the Russians accountable, today. I don’t think when we decided to do this, that anyone thought we would succeed. And what I was hearing from a lot of countries is we can’t do this and fail. We didn’t fail.We succeeded in condemning the Russians and suspending them from the Human Rights Council. We’ve had two votes in the General Assembly in which we have condemned Russia and supported Ukraine.And even in the Security Council, we have isolated the Russians.

So, I know if you’re sitting on the ground in Ukraine and you’re watching your people die, it looks as if we’re not doing enough. But we’re doing everything possible to ensure that the Russians are held accountable for this. We’re supporting, as you heard the Secretary say today, the Ukrainian prosecutor’s office in collecting evidence and preparing evidence so that we can hold people accountable. It’s not going to bring back the lives of the Ukrainians, those broken families, the destroyed buildings, that won’t be brought back, but we will hold them accountable. And then we will help Ukraine rebuild.

QUESTION: Ambassador Linda Thomas-Greenfield. There is a long tradition in the United States of having UN ambassador’s lead the way during conflicts. Adlai Stevenson, in wars cold and hot. Andy Young, Madeleine Albright, Jean Kirkpatrick. Now you’re in that chair and I think a lot of people fighting for Ukraine are very grateful for it. Thank you for being with us today.

AMBASSADOR THOMAS-GREENFIELD: Thank you so much, Andrea.