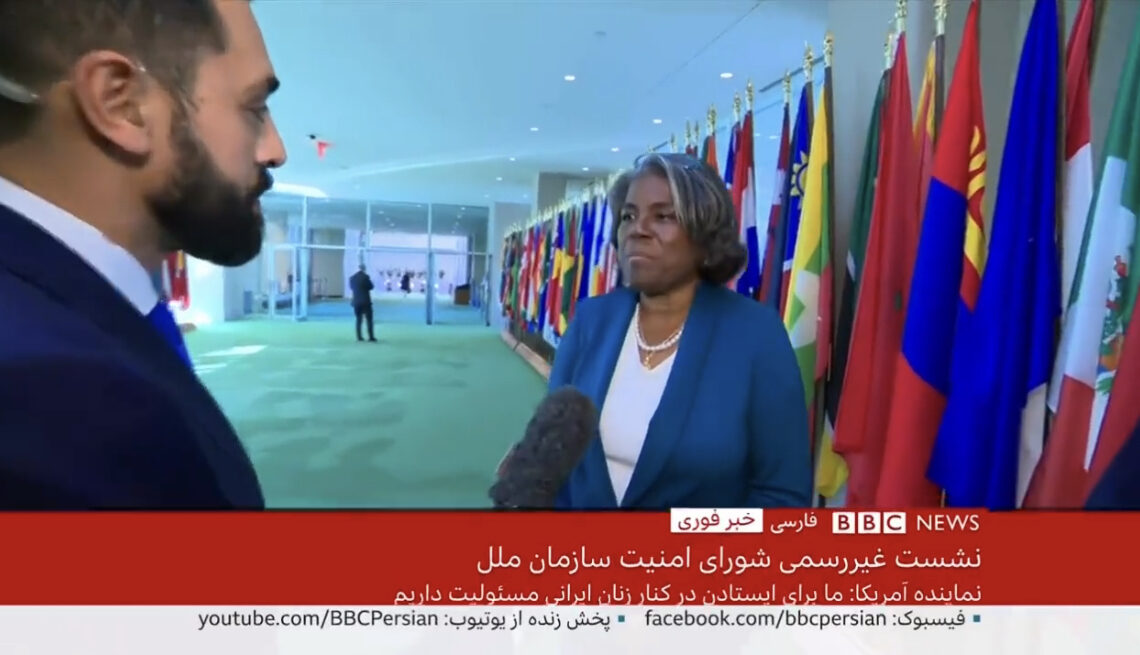 AMBASSADOR LINDA THOMAS-GREENFIELD: (In progress) On the situation currently on the ground in Iran, we have two main purposes for this meeting. The first and foremost is publicize what is happening, but also to speak to the Iranian women, the Iranian men, the Iranian people, who are protesting peacefully in their country, that we hear their voices, and we support them.

QUESTION: When you say you support them, beyond words what are the actions that could be tangible to people in Iran? Many of them have looked at the international community in the last six weeks and felt that not enough has been done, particularly looking at the United States and demanding more action, something that could actually materially change their struggle for change in Iran.

AMBASSADOR THOMAS-GREENFIELD: Well, we’ve done several very, very important things. We’ve taken action against the so-called morality police. They have been sanctioned as well other public officials who have supported their attacks against these peaceful demonstrators. Secondly, we have joined with the Special Rapporteur, his call for an investigation that will lead to accountability to those who have been involved in this. The U.S. has also indicated that Iranian women who are seeking refuge outside of Iran that we will be supportive of their efforts as well.

QUESTION: When you say sanctions, many of these people don’t actually have, probably, plans to come to the United States. And also here at the UN, there are demands about kicking Iran out of the Status of Women Commission or maybe a GA vote. Would those two things be something you would consider? Because the majority of these people are not asking for the Iranian government to change their behavior; they’re asking for this government’s downfall. Is that voice heard?

AMBASSADOR THOMAS-GREENFIELD: We’re not pushing for the downfall of the Iranian government. The people of Iran are speaking, and we are supporting their efforts to peacefully demonstrate against what their government is doing to them. And we’re looking at taking additional actions as we see fit to hold the Iranians accountable for what they are doing to their people. We support human rights everywhere in the world, and we’re supporting human rights here in Iran.

QUESTION: Minutes ago, the Ambassador of the Islamic Republic was standing here at the stakeout and saying what you’re doing is interference in their domestic affairs. What is your response to them, and what do you hope the community here, the members of the 15 countries, would say when they come to this meeting?

Here at the meeting, we hope that they will hear from countries from all over the world, members of the Security Council and others, that what they’re doing is unacceptable and that we will hold them accountable for what they’re doing.

QUESTION: And how has this protest changed U.S. policy, if at all, versus eight weeks ago, seven weeks ago? There was a lot of talk obviously about wanting the JCPOA to be revived. Now the Secretary stopped short of saying it’s dead, but it seems that the line is not dispositive. If – is there a circumstance that under – after all of this that you would be still talking to the Iranian regime?

AMBASSADOR THOMAS-GREENFIELD: Well, first of all, we’re focusing on two things: one, Iranian attacks on their own people; and two, the fact that Iran is providing weapons that are allowing Russians to kill Ukrainian people. And that’s our focus today.

But as for the JCPOA, we’ve always been clear on the JCPOA. We’re looking for a diplomatic way forward that if the Iranians go back into full implementation, we are prepared to go back into implementation, but they have put additional demands on the table that go far beyond the JCPOA. So again, the focus now is to ensure that we pay attention to what they are doing on the ground and how they are supporting Russia’s unprovoked attack on Ukraine.

QUESTION: And there was talk yesterday out of White House that the Iranians may be – that the Iranian government may be planning other activities in the region against Saudi Arabia or its neighbors in Iraq. Is that going to be part of what you are focusing today at all? Is that something that you would – you’re worried about?

AMBASSADOR THOMAS-GREENFIELD: That’s not the focus of our meeting today, but certainly this is something that plays into how we deal with Iran in the Council. Iran is currently breaking Resolution 2231 by providing weapons to the Russians to kill Ukrainians, and their activities elsewhere in the region also rise to that concern as well.

QUESTION: Does that mean that snapback is possible under 2231?

AMBASSADOR THOMAS-GREENFIELD: We have not had discussions on snapback, but Iran knows what it means when they’re violating 2231.

QUESTION: Your message, lastly, for the Iranian people who are protesting, who are getting killed, children being killed? We’ve heard now the number is at least 277, 40 children. What will America do that they can have access to internet? What can America do to limit the resources of this government from killing their own? What do you say to them watching this right now?

AMBASSADOR THOMAS-GREENFIELD: On the internet front, we are supporting technology companies that are providing opportunities and helping Iranians communicate with the outside world, but we are also doing everything possible to hold this government accountable.

And believe me, sanctions do work. They work, and that’s why the Iranians have asked and are continuing to complain about the sanctions, because the sanctions are having an impact. And the only thing that we ask them to do is stop attacking their own people, stop using their resources to support terrorism in the rest of the world, stop supporting the Russians’ unprovoked attack on Ukraine.

QUESTION: Ambassador, thank you very much for your time.