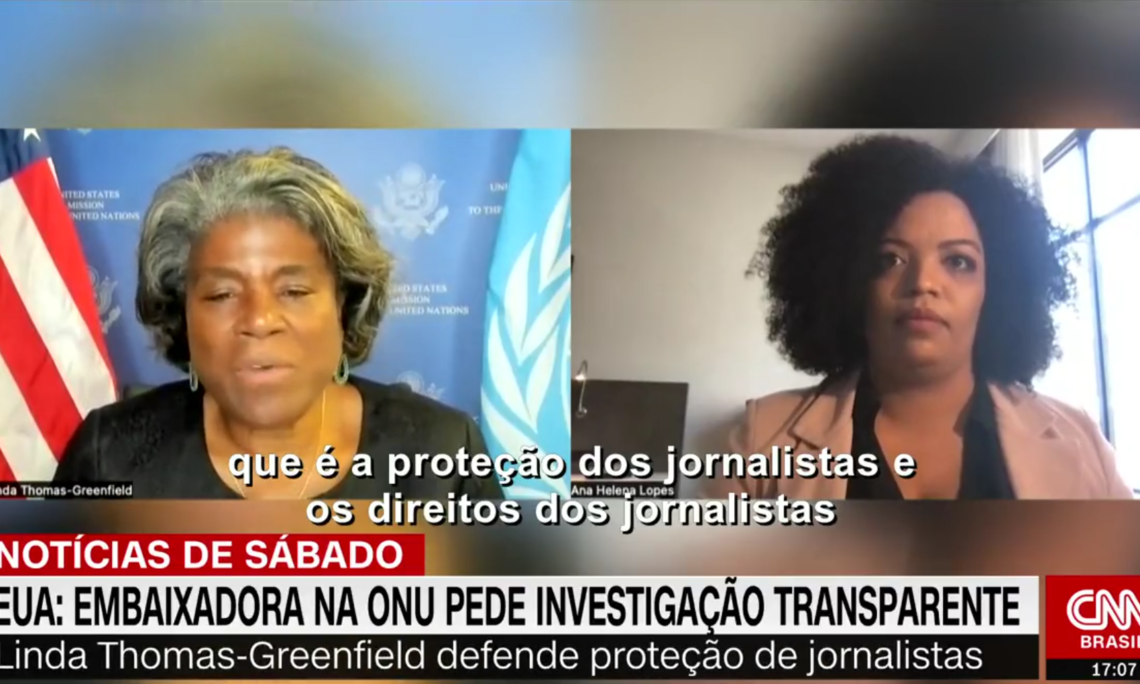 QUESTION: Hello, Ambassador Linda Thomas-Greenfield. My name is Basilia Rodrigues. I’m a political analyst from CNN Brazil. So it’s a pleasure to be here. I was looking for this interview a long time. So I have to tell you that when I saw your image on TV, talking on the United Nations Security Council, I thought: One day I will interview that woman. So it seems a dream to me. It’s a pleasure. I’m very grateful to be here in front of you – remote – but in front of you talking about important things, because I would like to know how to achieve beautiful solutions to conflicts around the world, including the indigenous issue.

We have a terrible problem in my country about indigenous issues. Brazil woke up with the terrible news about the death of Dom Phillips, a British correspondent, and Bruno Araujo, an indigenist. They were close to each other, they fight against the enemies of environment. But now they are dying. So, how do you see the violence increasing around the world? How does the United States see the Amazonias issue in Brazil?

AMBASSADOR LINDA THOMAS-GREENFIELD: That’s a really tough question that you’ve asked me, because it’s an issue that we really prioritize in our own government – the protection of journalists and the rights of journalists to be able to inform the world about situations like what is happening with indigenous people in Brazil. Without them, we don’t learn what is happening. And so to have heard of their disappearance and their death is just horrific. And we first and foremost have to call for an open, transparent investigation and accountability for what has happened to them.

In terms of the entire Security Council, this is a priority for the Council, as well, because our responsibility is to deal with issues of peace and security. And it’s not just issues related to governments. It’s related to people and the impact of conflict on people wherever that is in the world. And I think we have been grappling with how we can really influence these situations and hold people, countries accountable for what is happening on these issues.

You mentioned the deaths in Brazil. We were also just horrified by the killing of Shireen, the Al-Jazeera reporter in the West Bank. So attacks on journalists have become more prevalent over recent years, and we cannot let up on our condemnation, but also on demanding accountability.

AMBASSADOR THOMAS-GREENFIELD: And just fighting so people can understand what is happening. Fighting to tell the truth, which is what these reporters were doing.

QUESTION: So these days, we see the war between Russia and Ukraine. Do you believe in a warless world? What are you doing to guarantee peaceful solutions to conflicts around the world?

AMBASSADOR THOMAS-GREENFIELD: You know, the Security – the UN system was created around the concept of saving the next generation from the scourge of war. And so that is our charge. It’s our responsibility as members of the Security Council and as Member States of the United Nations. We are not succeeding, clearly, as we are faced with this war – this unconscionable war that Russian aggression – that Russia has taken against the people of Ukraine. And it goes against everything that is in the Charter, because it is an attack on the sovereignty of Ukraine, it’s an attack on the integrity of their border – all issues that are within the rights of Member States and the Charter. So it is incumbent upon us as members of the Security Council to bring these issues before the Council, to address these issues in the Council, and look for solutions.

At this moment, we’re pushing to ensure that Russia is condemned for their actions and that they are held accountable for the actions that they are taking in Ukraine, including violations and war crimes against civilian populations, attacks on women that wreak violence against women, torture, and just not abiding by international humanitarian law. And the reason we’re being so aggressive in ensuring that we hold them accountable is so that other countries will not feel that it’s okay. That the international community will not respond if they take such an action.

Our ultimate goal is to stop the fighting. And that’s what we’re working to accomplish now.

AMBASSADOR THOMAS-GREENFIELD: You know, it’s – I am just elated that we have established this holiday. And I was surprised that we were able – that the Biden Administration was able to get it passed so quickly. And it does send a message to African Americans and people of color around the world that we can commemorate this horrific event called slavery that impacted millions of people of African descent who were trafficked all over the world, including in your own country. And so this gives us an opportunity to step back, to really look at our history, and reflect on our past.

For me, I reflected on the fact that I had a grandmother who was born in 1865 in slavery. And had she and the people of Louisiana been told, she may have been born a free person. I don’t know how it impacted her life and her family’s life over the course of 100 years. When I got to know my grandmother, I knew her as a little kid. She died at 100 years old when I was in eighth grade. And I unfortunately never had the opportunity – or never thought about because I was too young – talking to her about her experiences immediately after slavery in the United States.

But I said a few days ago in a speech that, you know, I have to be one of her wildest dreams that her great-grandchild, just two generations would become the ambassador to the United Nations. I don’t think that was within her imagination. It wasn’t even within the imagination of my grandparents, and certainly in my parents imagination, that this could happen in the United States.

So we – while the reason behind Juneteenth is a little sad, the fact of Juneteenth is extraordinarily a happy moment, a moment of celebration, a moment of reflection, and I’m really, really proud that we have this holiday here in the U.S.

QUESTION: So what does it take for a Black woman to become a leader like you? What struggles does she have to fight in America? I’m from Brazil, and I know the challenge there. So do you think you can somehow influence other women to become leaders as well? And just one more: What’s the importance of this representation, Linda Thomas-Greenfield?

AMBASSADOR THOMAS-GREENFIELD: Thank you for that question. I’m still pinching myself that I’m here. I do think it’s important to have people who look like me in these leadership roles so that young people like you, wherever you are in the world, know that this is a possibility within your own lifetime for you to achieve. Because in my generation, when I was young, I didn’t see this as a possibility for me to achieve. And people want to do and be like people who look like them. And my family gave me a T-shirt that said, “My U.S. Ambassador to the United Nations looks like me.” And that’s me. So I hope that my presence gives confidence to other young Black people – and women in particular – but Black people and people of color wherever they are, that it is possible to reach these higher heights.

It wasn’t easy. I won’t say it was easy. I think, as I look back at some of the struggles that I had, I’m not sure that people in this generation would accept the kind of just prejudice and lack of respect that my generation had to go through to accomplish it. But I’ve always said to people, the reason I was able to accept it is because I didn’t internalize it. I didn’t make it my problem. I left it as their problem if they wanted to be racist. I knew that I had a job to do. And I have always approached every job that I’ve had to do with commitment, with hard work, and with a sense of pride, and a sense of accomplishment. And if young people approach their work in that way, they can conquer the world.

And I think, for your generation, the world is just there for you to conquer. There’s nothing that you can’t do. You can go into space. You could be a top doctor, you can be a top scientists, you can be the best lawyer in the United States, and you can be the UN Ambassador, because you are capable of doing that. And I think my image and my presence has given some – made some contribution to the feeling that, whatever is there to accomplish, we can accomplish.

QUESTION: And in Brazil, I’m a journalist there 15 years, and I am graduated in history, too. And now I’m studying law to be better in the future.

AMBASSADOR THOMAS-GREENFIELD: Well, that’s fantastic. And I think for you – you also give to the world the sense of possibilities of what a young woman of color can accomplish. And I’m so delighted to see you, that you’re on CNN, you’re from Brazil. I will tell you, you’re the first Afro Brazilian I have ever met. And so that is, truly, for me an honor. Because now I see people from Brazil who look like me, and I’ll say to my Brazilian colleagues: Where are your people of color?