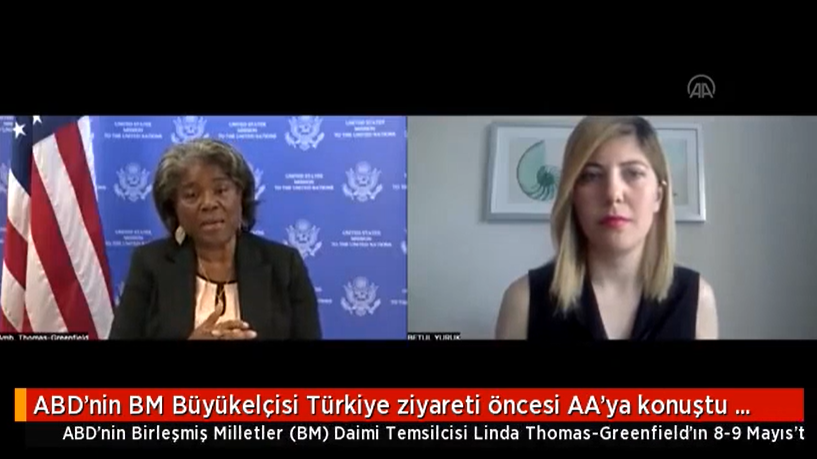 AMBASSADOR LINDA THOMAS-GREENFIELD: Betül, I’m visiting to update myself on the situation at the border so that I am in a better position to defend keeping this border open and pushing for reopening some of the other borders. Look, it is in Russia’s interests – it’s not just in our interests – it is in Syria’s interests that this border remain open. We are providing – we listened to the Russians last year and we supported cross line delivery of humanitarian assistance. We supported their requests that the Secretary-General do a report at the six-month mark to allow for the continuation for another six months. We know that cross-line cannot provide all of the needs. It complements absolutely the provision of humanitarian assistance to Syrians, but it is not sufficient to support all of the needs of the millions of Syrians who depend on humanitarian assistance from the international community. So, it is my hope that – with the Russians – we come up with an agreement, as we did last year with the entire Security Council, to extend this border so that we can continue to provide needed humanitarian assistance to the people of Syria.

QUESTION: Ambassador, what happens if the border closes? Does the Security Council have a plan B for that?

AMBASSADOR THOMAS-GREENFIELD: You know, if the border closes, what this is going to mean is that thousands of people in Syria will starve, and I don’t think anyone wants to see that happen. So, I am focused on success. I’m focused on the goal of keeping this border open. I don’t think there’s any justification for closing the border. I don’t think there are any arguments that the Syrians, or even the Russians, make that suggests this border should be closed. And you asked what will happen should the border close? Should that particular border close, what we will see happening is, I assume, that the Turkish government will continue to allow humanitarian assistance to cross the border. But what it also may mean is that those things that the Russians and Syrians have been worried about might be going across the border will suddenly have that possibility of being used to get supplies in to some of the fighting forces.

When I visited the border last year, I have never seen the kind of monitoring at that border. I’ve never seen anywhere else in the world. Every single box is checked. Every single vehicle is checked. There are hundreds of amazing humanitarian people – UN people – who are working at that border to ensure that what is crossing into that border is humanitarian assistance that will feed, nourish, and provide needed medical support to the Syrian people. If the border closes, we don’t know what will cross that border. The pressure will be on the Turkish government to support those efforts and I think that it is crucial that we have the UN continuing to manage what is happening there.

QUESTION: Ambassador, while you are in Turkey will you also visit to the capital, or Istanbul, and meet any Turkish officials, and maybe discuss the war between Ukraine and Russia? Turkey has been under the spotlight as a mediator and there were two rounds of talks in Istanbul. What does your Administration think about Turkey’s role?

AMBASSADOR THOMAS-GREENFIELD: We support Turkey’s role in trying to find a diplomatic solution to the situation in Ukraine. And we, the U.S. government, we’ve had a number of meetings and discussions with Turkish officials on what is being done. And again, we support their efforts and all efforts to find the diplomatic solution to end this war.

I will not be going to the capital. I will be leaving the border area to go directly to Brussels to a meeting on Syria and I will meet my Turkish counterpart at that meeting, and we will discuss the situation in Brussels. I’m also meeting, today, with the Turkish PR to talk about what our plans are and also to, again, encourage their efforts to find a peaceful solution and end the war in Ukraine.

QUESTION: Ambassador, if I may, I’d like to ask something about a different topic. Your Administration recently, State Department, sent a letter to the U.S. Congress and recommended that it would be good for the U.S., and it could serve the U.S. national interests if the U.S. government approves the sale of F-16 fighter jets to Turkey. Has there been any progress on that? And do you think the sale will go ahead?

AMBASSADOR THOMAS-GREENFIELD: I can’t comment on that. I’ll have to refer you to the State Department and to DoD on that issue. They can give you the most updated information.

QUESTION: I understand, and I’ll follow up with a different topic. The Biden Administration – your Administration – has been imposing some sanctions on Turkey’s defense industry because of its purchase of Russian missile defense system S-400s. Does the U.S. government plan to use these sanctions? What are their conditions? Would you be able to comment on that?

AMBASSADOR THOMAS-GREENFIELD: Again, I can’t comment on that. The discussions with the Turkish government are ongoing. But I’m not involved in those discussions. And again, I would refer you to the State Department to get the most updated information.

QUESTION: I see. Another topic, Ambassador, there was a prisoner swap in Turkey recently, between U.S. and Russia and a former U.S. Marine was swapped with a Russian prisoner in the U.S. I’m wondering if there was a reason for your government or for Russia to choose Turkey. Why was that? Why was Turkey chosen for this prisoner swap?

AMBASSADOR THOMAS-GREENFIELD: Turkey has been certainly a partner to the U.S. government in a number of areas and we thank them for facilitating the swap. The Biden Administration has been very engaged on working with all countries to free Americans who are being unfairly held and this was one of those efforts. It was successful and we thank Turkey for allowing us to use Turkish territory for the swap.

QUESTION: I understand. Ambassador, thank you very much for your time, and I hope you’ll have a good trip to Turkey.

AMBASSADOR THOMAS-GREENFIELD: Good. Thank you very much and maybe we can get together when I get back.

QUESTION: That would be wonderful, Ambassador. Thank you.

By United States Mission to the United Nations | 6 May, 2022 | Topics: Highlights, Remarks and Highlights