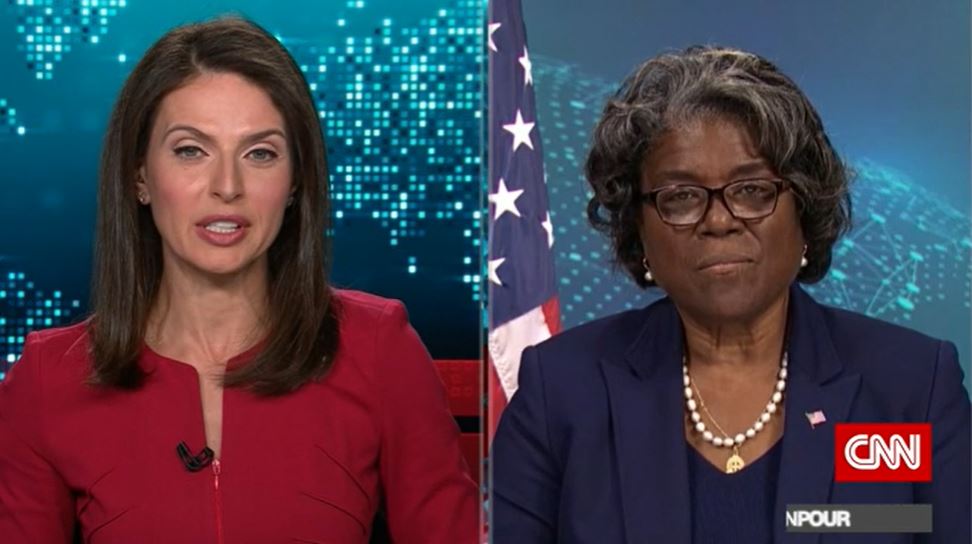 QUESTION: Ambassador, thank you so much for joining us. You are about to embark on a trip to Uganda and Ghana this week to discuss the impact of Russia’s war on Ukraine, specifically the impact it’s having on global food security. Why, specifically now, is it important for you to take this trip?

AMBASSADOR LINDA THOMAS-GREENFIELD: Well, look, Bianna, I have a deep history with Africa, and I will tell you that this trip has been in the planning for some time. So, I will, as you noted, be traveling to Uganda and Ghana and I’m also doing a brief stop in Cabo Verde, as well. And I have three major aims for this trip. One, I want to affirm and strengthen the U.S. partnership with these three countries. I want to discuss the disproportionate impact of the rising food insecurity crisis on Africa. And that crisis has been one that has been ongoing for quite some time. We are looking at commodity prices, for example, on the continent. We are looking at the cost of energy, as well. And then I want to discuss a number of issues, critical to regional peace and security, in particular for Ghana. Ghana is a member of the Security Council, and I have always engaged with members of the Security Council and try to always include members’ countries in my travels.

QUESTION: Another member of the Security Council, I don’t have to tell you, is Russia. And the reason that I ask about the timing is because this comes on the heels of a trip to the region that Russian Foreign Minister Sergei Lavrov was just on last week. He was on a four-nation tour. He visited Egypt, Ethiopia, Uganda, and Congo. And he is trying to transform the narrative, in saying that the blame isn’t on Russia for the rise in food prices and the scarcity of food. But it is specifically on the sanctions imposed on Russia by the West. Is there any concern on your end, on the U.S. government’s end, that that narrative may in fact be effective?

AMBASSADOR THOMAS-GREENFIELD: What we are concerned about is that that narrative is not factual. The reason that there is a food insecurity crisis on the continent of Africa at this moment is because of Russia’s unprovoked attack on Ukraine. These countries are dependent on about 75% of their food aid from Russia, as well as from Ukraine. And this unprovoked war has led to shortages, it has led to price increases, and it has led to additional suffering of the people on the continent of Africa. Russian food is not sanctioned by our sanctions. There are no sanctions on any agricultural products from Russia. So, it is completely a disinformation, misinformation campaign in which Russia does not want to accept responsibility for what they have done to international food markets across the continent of Africa.

QUESTION: And are you planning to say what you just told me to the leaders of those countries and those representatives who you are meeting with?

AMBASSADOR THOMAS-GREENFIELD: You know, I am going to be listening to them. This, for me, is a listening tour. It is to hear how they want to deal with addressing the issues related to food insecurity and finding solutions. So, I am not about some blame game. What I am about is finding a way forward, so that we can address the food insecurity needs that people are feeling every single day. People are starving. People are suffering. How can I and the U.S. government use our positions to help Africa address these needs? And as you know, Administrator Power was in the region last week discussing food insecurity with African leaders in the Horn. Secretary Blinken will be on the continent next week. And all of this is a lead up to what we will be doing during High-Level Week in New York in September, and the African Leaders Summit in December, that the President will be hosting.

QUESTION: One solution to this crisis is getting the ships out of port, which, if there is any sliver of good news, the first ship did go out this week carrying just 26, I believe, thousand tons of corn. That is small relative to the scale of some 20 million tons of food that have been stored up there since the war began. But having been said, this is good, positive news. There is another 16 ships that are scheduled to leave port as well, in the days to come. Now, this was all because of a brokered deal between the United Nations and Türkiye. How confident are you that Russia will uphold its end of the bargain here and make sure that these ships continue to leave port?

AMBASSDOR THOMAS-GREENFIELD: Let me just start by commending the Secretary-General and the Turkish government for their engagement to move this initiative forward. We know how much Russia can be trusted. We saw them attack Odesa port within hours after signing on to the deal. But that said, we continue to be hopeful, as are the Ukrainians, that this will continue – this initiative will move forward, and we are able to get those 20 million tons that are sitting on those 16 ships, out to market. And we will continue to support that effort. But we are also very realistic in how much we can depend on Russia. We are hoping that they will honor their commitment and allow those ships to move, as well as move the food that they have, in their own markets, to the marketplace.

QUESTION: The numbers and figures are just staggering, as you know. As many as 50 million people in 45 countries are now teetering on the brink of famine, that is according to the UN’s World Food Program. As many as 828 million people are malnourished, that is one tenth of the world’s population. Europe, it largely views Ukraine and Russia as their breadbasket, but the United States remains the world’s largest exporter of agricultural produce. I am just curious, what more is the U.S. doing, or can the U.S. do, can you specifically offer, in terms of U.S. aid with food shipments leaving U.S. ports to some of these countries most in need?

AMBASSADOR THOMAS-GREENFIELD: First and foremost, we are the largest contributor to the World Food Program. We have given World Food Program $3.7 billion this year and compare that to what the Russians have given. So, first, we are trying to address the humanitarian needs. But I will tell you that I had Secretary Vilsack join me in New York a few weeks ago, to talk about how we can contribute to food assistance here in the United States. So, we are encouraging more production, fertilizer, for example, by American producers. We are supporting American farmers and their ability to contribute to this. And, as you know, Secretary Blinken was in New York in September*, as well, and we hosted a ministerial on food insecurity, and came together on a road map to address these issues. We have had over 100 countries sign-on to that roadmap that commit to working together to address food insecurity across the globe.

QUESTION: You know, I was with you when you were in Europe, when we were traveling to Romania and Moldova, and we got news of the massacre perpetrated at the hands of Russians in Bucha and you spoke out against that. We continue to see Russia bombard Ukrainian cities, whether it’s the port city of Odesa, whether it’s Nikolaev. But also reports of prison camps being struck. Ukrainian POWs, as many as 53 have been said to have been killed. The investigation is ongoing now as to determine, specifically, whether this was at the direction of Russia that conducted the strike. But this comes as President Zelenskyy, once again, would like the world to call, not only label, Russia a terrorist state, but for the United Nations in particular, to remove Russia from the Security Council. What more can you say about that effort? Is it a real one? Is there a possibility that that can be raised in the weeks ahead?

AMBASSADOR THOMAS-GREENFIELD: We have successfully isolated Russia in New York. We were able to get 141 countries to condemn Russia in the General Assembly, we kicked them off of the Human Rights Council, and we are continuing our efforts to isolate them. Russia is a permanent member of the Security Council. It is in the UN Charter. It is something that we have to deal with, but as we deal with them on the Security Council, we are pushing back against all of their efforts to put forward a disinformation, misinformation campaign and using their chair to try to put the blame on others, instead of accepting the blame for what they have done. Russia is responsible for this war. And their sitting on the Security Council is not going to protect them from the condemnation that they are facing and will continue to face until they make the decision to withdraw from Ukraine.

QUESTION: Before I let you go, I would like to get you to respond to what we heard yesterday from UN Secretary-General Guterres, sounding the alarm, really, over the war in Ukraine, nuclear threats in Asia and the Middle East. And he warned that, quote, humanity is just one misunderstanding, one miscalculation away from nuclear annihilation. That is a pretty ominous warning. Is that something that you share, that the U.S. government shares?

AMBASSADOR THOMAS-GREENFIELD: We are certainly working to ensure that that does not happen. Secretary Blinken was in New York yesterday at the NPT meeting where the Secretary-General spoke. It is obviously a concern. It is a high priority of the U.S. government to push back on any efforts, by any country, to use nuclear weapons. And we are certainly going to continue to work with our partners, with the United Nations, to make sure that what the Secretary-General is predicting does not happen.

QUESTION: Ambassador, thank you so much for your time. And best of luck on your trip.

AMBASSADOR THOMAS-GREENFIELD: Good. Thank you very much and it was great talking to you.