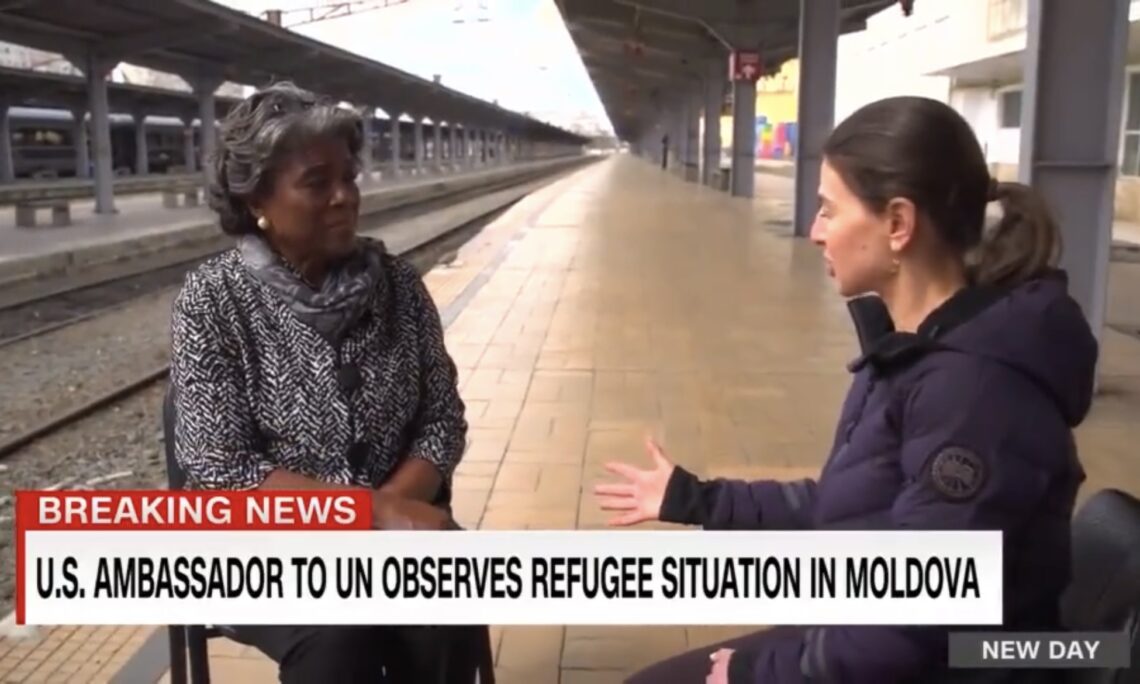 NARRATION: Linda Thomas Greenfield, the U.S. Ambassador to the UN addressing the horrifying images out of Bucha.

QUESTION: You think you’re going to get the two-thirds needed?

AMBASSADOR THOMAS-GREENFIELD: I know we’re going to get it.

QUESTION: Sergey Lavrov, Foreign Secretary of Russia, Dmytri Peskov, have both called what the U.S. and what the world has seen as lies. How do you expect to respond to your counterpart at the UN who will likely say the same?

AMBASSADOR THOMAS-GREENFIELD: Well, he’s said that, time and time again, when we have exposed their actions and we will continue to expose them for the liars that they are. They told us that we were seeing actors, dead bodies acting. So, I expect that I will hear that in the Security Council. No one will believe them. And we will continue to isolate and expose them in the Security Council and around the world.

QUESTION: Do you expect that China will believe them?

AMBASSADOR THOMAS-GREENFIELD: I can’t speak for the Chinese. I would hope that the Chinese will see what we’re seeing and also join us in condemning these horrific actions.

NARRATION: Six weeks into Russia’s war in Ukraine CNN accompanied Thomas-Greenfield as she toured refugee sites in Romania and Moldova. Just over a million Ukrainians have flooded into these countries to the west. Ninety percent of them, women and children.

QUESTION: What made you decide to come to Moldova?

AMBASSADOR THOMAS-GREENFIELD: You know, I have been watching news reports of refugees crossing borders into Poland, and as I looked at the map, Moldova is the smallest country, it’s the poorest country, and per capita is taking the most refugees. So, I felt it was important to come here to thank them.

NARRATION: Nearly 400,000 refugees have crossed Moldova’s border with Ukraine since the war began. And 120,000 of those remained in the country of only about two and a half million people; each one of them with a story, a history, a life abruptly uprooted and left behind. Like 19 year-old, Lina Mincheva, she and her mother left her home and Nikolayev nearly one month ago, leaving behind her grandmother and boyfriend.

QUESTION: It’s been almost a month since you left. What has it been like for you?

REFUGEE: Yes, it’s crazy. It’s been so challenging because first, like my first emotions, I didn’t really have them because everything was so fast and quickly. I couldn’t really understand myself, but then I thought that maybe I shouldn’t have left.

REFUGEE: Because I don’t have children. And I’m young. I can help more. I could have helped more, if I stayed in Ukraine.

NARRATION: We also met 74-year-old grandmother, Valentina, from the nearby port city of Odessa. She left behind her daughter and grandson, who refused to leave the country. She worries about the recent Russian bombing in Odessa, but also says that she’s so appreciative of how Moldova has opened its borders and arms to people like her.

What Moldova doesn’t have to offer is much financial assistance, which is one of the reasons for the Ambassador’s visit.

AMBASSADOR THOMAS-GREENFIELD: We will be announcing an additional $50 million in support to Moldova for their efforts supporting refugees here.

QUESTION: What more can the U.S. do and is willing to do to support this country, not just financial aid, but its own security?

AMBASSADOR THOMAS-GREENFIELD: You know, I will be meeting with the President and the Prime Minister later today and that will be part of the discussion I will have with them. in terms of what else can we do to give you more confidence about your security to address the problems that you might foresee in the future. And I will take that back to Washington and share it with other Cabinet officials to see how we can better support them.

NARRATION: Moldova’s Prime Minister acknowledged Russia’s presence along the breakaway region of Transnistria that says that for now, their intelligence shows no signs of additional Russian troop buildup. Thomas-Greenfield’s final stop was in Romania, where some 600,000 Ukrainian refugees have come through the main train station in the city’s capital of Bucharest since Russia’s invasion. Unlike Moldova, Romania is a member of NATO and thus is protected by the organization’s Article 5 Charter. Still, signs of concern and vulnerability are becoming increasingly evident.

QUESTION: Starting this month, I just read that here in Romania, those under the age of 40 will be given iodine pills in anticipation – this is Romania, a NATO nation protected under NATO, a member of the EU. What does that tell you about the trepidation and fears among European allies?

AMBASSADOR THOMAS-GREENFIELD: I mean, it just tells you how much fear people have and what they know Putin is capable of, and so that’s why we have to stay unified in our efforts, to stop him from going any further.