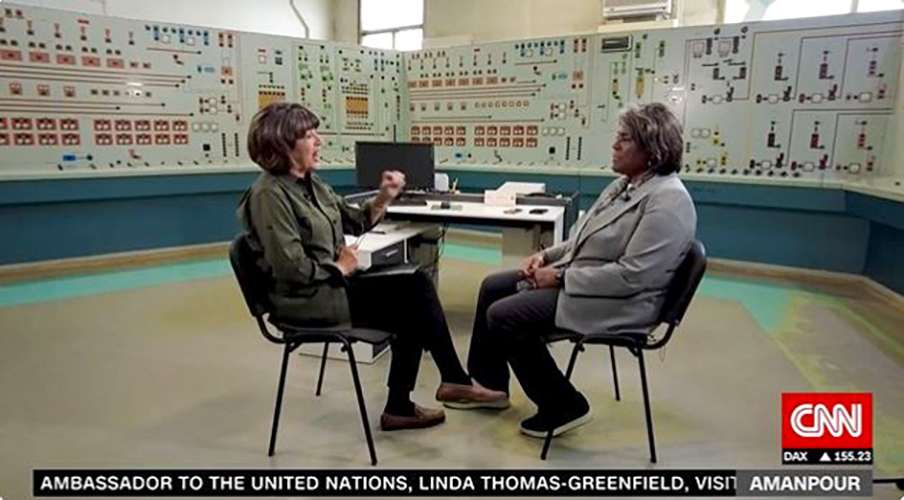 QUESTION: Ambassador, welcome to the program.

AMBASSADOR LINDA THOMAS-GREENFIELD: Thank you. I’m delighted to be here.

QUESTION: So, we’re here in the heart of the matter. This is a grain milling processor here. It’s a vital part of this country’s export, vital for people’s food supply around the world. Do you believe that it will be – the deal will be renewed mid-November? And what do you make of Putin that he came back into the deal after threatening to exit it?

AMBASSADOR THOMAS-GREENFIELD: Well, I’m hoping that the deal will be extended. I know that extraordinary efforts are being made by the Secretary-General and others to negotiate an extension of this deal. The fact that Putin pulled out of the deal temporarily shows he has no concern about the impact that this is having around the world. He sent shocks around the world when he did this. He got tremendous pressure from everyone. And he came back into the – he had no choice but to come back into the deal. But again, I think it shows that he really does not care about the people his unprovoked war is impacting.

QUESTION: And yet, just on that, this is one of the rare areas of cooperation in this vicious war. And also prisoner exchange is a rare area of cooperation. People maybe don’t focus on that so much. Does that give you any hope or grounds for an ability to discuss with them when you’re in the Security Council on the bigger issue?

AMBASSADOR THOMAS-GREENFIELD: I think what we’ve seen in the Security Council by the Russians is a total lack of sensitivity, a total lack of cooperation. They have used the Security Council to push forward their negative narrative, their misinformation, their attacks on the people of Ukraine. We have used the Council to isolate them, to condemn them, and taking it as well to the General Assembly where they have been roundly condemned. So I don’t see the Russians at this point looking to use the Security Council as a forum where they will cooperate with the rest of the world.

QUESTION: Does it bother you that, not just the UN but national governments, yours and others, have put a huge number of sanctions on Russia for all that it’s doing here –

AMBASSADOR THOMAS-GREENFIELD: Does it bother me that we put sanctions?

QUESTION: No. The fact that Russia is still doing very well, thank you very much. Does that bother you?

QUESTION: That it’s changed its market. That it’s actually selling energy. That its narrative in the developing world – it seems to be winning. It seems to –

AMBASSADOR THOMAS-GREENFIELD: I don’t think they’re doing well. I think the sanctions are having an impact on them. I see a sense of desperation on their part. The fact that they have to have this disinformation campaign around the world shows that they’re desperate. It shows that this is having an impact on them. And I think that the rest of the world has seen through their false narrative.

QUESTION: You’re also visiting a forensic laboratory – a forensic location today regarding war crimes and accountability. I want to know what you think and where you think that is. Plus, I spoke to two senior senators who were on a CODEL visit just last week, who actually said that they wanted to take to the ICC, which is the UN-mandated war crimes tribunal, the idea of a separate special tribunal for Ukraine. Is that something that the U.S. supports? That the UN supports?

AMBASSADOR THOMAS-GREENFIELD: Well, right now I’m here to see the efforts to document evidence of war crimes. And there are a number of entities – the ICC, the ICJ, other entities and investigations taking place within the UN, including the Justice Department here, the prosecutor’s office here, who are all investigating war crimes and gathering the data. So, we’re looking at ensuring that we support their efforts to gather the data, so that when it goes before whatever investigation or tribunal, they actually have the evidence in hand to prosecute.

AMBASSADOR THOMAS-GREENFIELD: At this moment, I do think that the resources are there, but as we get into more of the documentation, those determinations can be made later. But right now, there are organizations and institutions. The ICC can do it, the ICJ can do it, the Prosecutor’s Office of Ukraine – they’re all available to do the investigations that are necessary. I heard today that there are more than 60,000 cases that have been put forward. There may be many, many more. We don’t know what this is going to lead to.

QUESTION: Ambassador, we’re sitting here right on the day of the midterms in your country. And I don’t ask you to weigh in politically, but as you know, there’s been some suggestion that there might be Ukraine fatigue, given the energy costs, given the pain of every country’s citizenry, etc. Europe is having a really hard time. Do you believe that this could chip away at the united front for continued sanctions against Russia? Could chip away at the support for Ukraine around the world?

AMBASSADOR THOMAS-GREENFIELD: Christiane, we have been unified from day one and we’ve not seen any cracks in that unity. Europe is unified. NATO is unified. We’ve had bipartisan support in the United States for support for Ukraine. Our support is unwavering and we will continue to be unified until Ukraine wins this war and Russia takes their troops out of Ukraine.

QUESTION: So, we’re in a grain processing silo. [Buzzer sounds.] So why don’t we just have the atmospherics for a few seconds? [Laughter.] It’s okay. On that level, we understand National Security Adviser Jake Sullivan was in town a few days ago. And we understand that the United States is trying to persuade the president, who you’re going to visit, President Zelenskyy, to at least sound willing for some kind of negotiations with Russia. Do you believe, right now, that the United States should be pushing negotiations? I know the U.S. says, ‘Ukraine with Ukraine, not without Ukraine.’ But do you believe that that moment has come to try to get all parties around the negotiating table?

AMBASSADOR THOMAS-GREENFIELD: The international community wants justice for the people of Ukraine, and any negotiations that take place have to take place with Ukraine in the driver’s seat. They have to determine that when they are ready for those negotiations, with the backing and support of the international community, following the Charter that Russia has violated. So, that’s where we are on these negotiations. Ukraine is fighting for its life, and our support for them will continue to be strong, and it will continue to be unwavering.

QUESTION: So the U.S. and the permanent five who actually support you are not pushing them to the negotiating table?

QUESTION: Iran. The idea of the Shahed kamikaze drones, the other Iranian supplied drones, potentially ballistic missiles, potentially Iran asking Russia for help with its nuclear program. Iran has also been sanctioned to within an inch of its life. How do you bring Iran into some kind of compliance or not?

AMBASSADOR THOMAS-GREENFIELD: Look, Iran providing drones to Russia breaks Security Council violations.* Russia receiving those drones have broken a Security Council resolution. So, we are looking at bringing this before the Council to discuss in the Council and we’ve asked the Secretary-General, under Resolution 2231, to investigate what Iran is currently doing with Russia. They are providing drones that are attacking civilian infrastructure in Ukraine, and it’s unacceptable.

QUESTION: Do you buy their version of it? The foreign minister saying we gave – we sold as part of the defense deal before the war?

AMBASSADOR THOMAS-GREENFIELD: We’ve seen evidence of those drones being provided since the war started. They know that, the Russians know it, and we do.

QUESTION: And on the women’s movement there, Europe is looking to sanction all those parliamentarians who have suggested harsh prosecution for women protesters. What will the Security Council do, if anything?

AMBASSADOR THOMAS-GREENFIELD: Well, you may know that last week with the Albanians, we hosted what was called an Arria-formula discussion about Iran, and we brought the Security Council and a number of Member States into the room to really discuss what is happening there, to show our support for the Iranian women, to show our condemnation of Iran. And I think the Iranians heard that loudly and clearly because we started hearing from our colleagues that they were reaching out to them discouraging them from participating in this meeting. And we will continue to raise this in New York, in the Council, and elsewhere, the Human Rights Council, until Iran stops their brutal attack on women in Iran.

QUESTION: Which pretty much puts a nuclear deal kind of off the table for the moment.