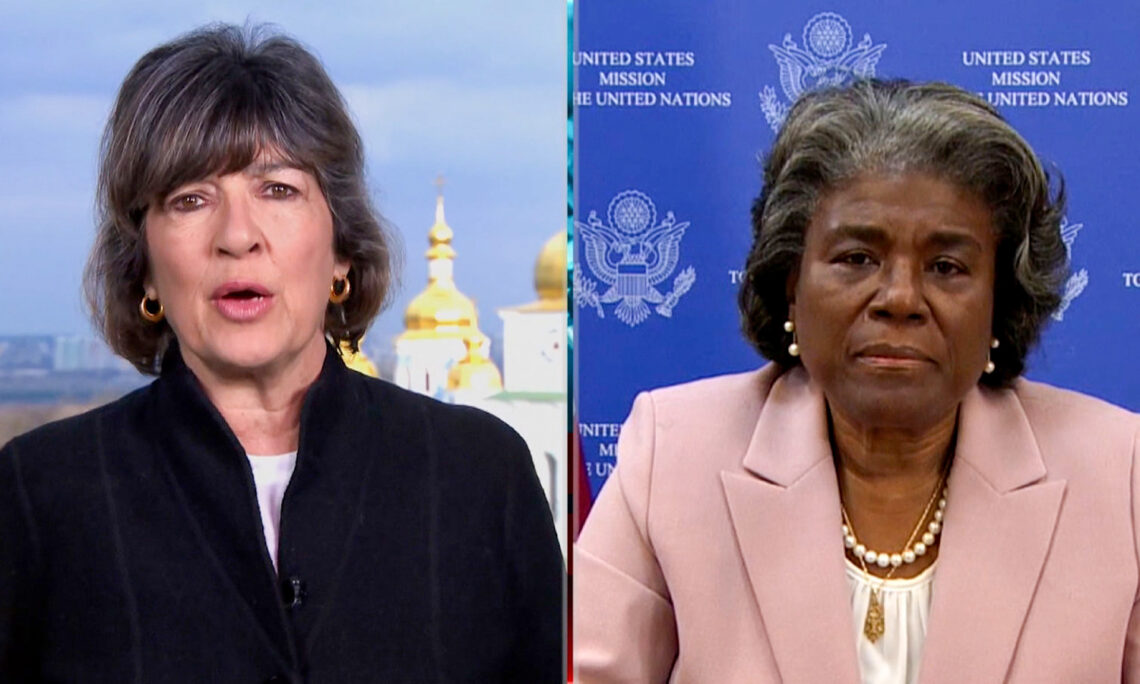 AMBASSADOR LINDA THOMAS-GREENFIELD:  Thank you. Thank you very much.

QUESTION: You know, it’s really important to talk to you about what the world can do. You know and you’ve heard President Zelenskyy literally tear into the UN and its lack of efficacy, as far as he sees it. So, let me start by asking you something that you called for, the U.S. has called for the suspension of Russia from the Human Rights Council of the UN. Can you actually do that? Do you have the votes, do you think?

AMBASSADOR THOMAS-GREENFIELD: Absolutely. We have been working very, very hard since this war started to build a coalition of countries who are prepared to condemn Russia. We got 141 votes, the first time we went into the General Assembly. The second time we got 140. And I have no doubt that we can defeat Russia here on the Human Rights Council. They don’t deserve to be on the Human Rights Council. Every single country in the General Assembly, they know that how they vote will be very, very important. And we’re engaging with every single country to encourage them to support this effort.

QUESTION: So you believe you’ll get more than those votes that you just enumerated in the past?

AMBASSADOR THOMAS-GREENFIELD: We need a majority of those present and voting. And so I don’t know that we’ll get 140. I know that we will get the two-thirds vote required of those voting to win this.

QUESTION: Okay. And what is the practical implication of suspending Russia? And why suspension and not outright expulsion?

AMBASSADOR THOMAS-GREENFIELD: Well, the practical result of it is continued isolation of the Russians; a strong message from the international community that we’re not going to allow them to sit in the Human Rights Council, declare themselves supporters of human rights while they are committing war crimes in Ukraine. And so, that’s the message that we want to send, and that is the effect of that message. It is to get them off of the Council so that they don’t use the Human Rights Council as a propaganda arm for their actions.

PRESIDENT VOLODYMYR ZELENSKYY: Where is the security that the Security Council needs to guarantee? What is the purpose of our organization? Either remove Russia as an aggressor and a source of war so it cannot block decisions about its own aggression, its own war. Or if there is no alternative and no option, then the next option would be dissolve yourself all together.

QUESTION: So dissolve the Security Council. That’s what the President of Ukraine is saying. I think the U.S. says there’s very little chance of that happening. But give me your impression of what many people feel too often in the really serious, you know, moments, the toothlessness of the Security Council to wage peace.

AMBASSADOR THOMAS-GREENFIELD: Look, Christiane, I understand the frustration that President Zelenskyy is feeling; his country is under attack and the Security Council has not been able to stop that attack. But what we have succeeded in doing, and we should be recognized for, we have isolated Russia. Their veto does not veto the ability for us to call them out. The fact that President Zelenskyy was able to speak to the Security Council with Russia sitting in the room and see that horrific film that he showed was – shows the power of the Council that we are able to call them out, to condemn them, to isolate them before the world so that they don’t use this platform as a Permanent Member of the Security Council – to press their propaganda. No one believes it. There were 14 countries speaking yesterday, and all 14 countries called for Russia to cease this effort against Ukraine. So, while we’re – we can’t stop the war, we can make it very, very difficult for Russia to sit comfortably in this Council and promote the lies and the propaganda that they have been promoting, and they’re failing at that. What they have succeeded in doing is unifying us. They have unified Europe, they have unified NATO, and they brought together a strong coalition of condemnation here in New York.

QUESTION: Ambassador, you’re absolutely right. They have unified the West. That’s absolutely correct. But people do believe them. People do believe their propaganda. Certainly the Russian people do, and certainly many parts of the world that feel, you know, that there’s another narrative for better or for worse. There are many people in many parts of the world, whether they support Russia or not, tend to believe its narrative on this. So can I ask you as a diplomat and just personally? What was it like when you saw, you sat in that chamber, and you watched President Zelenskyy, and then you heard the Russian ambassador basically tell President Zelenskyy that everything he was saying and everything the world was reporting was untrue, and it was fake news, and all of these atrocities were just made up?

AMBASSADOR THOMAS-GREENFIELD: Nobody believes them. And the Ukrainian ambassador was in the room and I thought he very effectively responded to that. No one believes that we have fake bodies that the Ukrainians have somehow staged to show this. And I have to say, Christiane, what is important is what you are doing; you’re there, you’re on the ground, you have credibility. The press has credibility here to report these horrific scenes that we’re seeing and to tell the world the truth. And we’re going to continue to promote the truth, to promote transparency, and to encourage others to look at this with – and see what we’re all seeing. And I don’t think Russia is winning this propaganda war. They are succeeding inside their own country and we have to make a greater effort to get information to Russians themselves, so that they know that their young boys are in Ukraine, fighting against the Ukrainian people, and their bodies are being left on the streets. They’re not being brought home. That’s the message that we have to get to the Russian people so that they understand what is happening, as well.

QUESTION: Ambassador, in terms of sanctioning Putin’s Russia to try to affect his behavior, or at least, to try to affect the funding for this war, it appears the U.S. is backing the sanctioning of two of Putin’s children. And I just wondered if you can tell me more about that, and what effect you think that would have.

AMBASSADOR THOMAS-GREENFIELD: Look, we have – the President made clear that we will ensure that these sanctions are felt by Putin and felt by the oligarchs who are supporting him. And we are continuing to look at new tools of sanctions that we can use and put pressure on Putin. So, all I can say is that we will continue in that effort. And we know, we know that they are feeling the pain of these sanctions.

QUESTION: Ambassador, I need to ask you one more time about what happens if you’re not successful. The Mayor of Mariupol, besieged under the most ferocious bombardment, people literally, we’re told, don’t even have the required food, medicine, water, electricity, nothing right now. The mayor there has called it and let me quote, “the new Auschwitz.” We saw what happened when the UN Security Council declared areas like Srebrenica safe, when the UN Security Council did not intervene to prevent a genocide in Rwanda, and we saw Secretaries-General and Presidents apologize afterwards for their lack of ability to affect these matters on the ground. I wonder whether that goes through your mind and what you think about what we might find, even worse than what we found around Kiev.

AMBASSADOR THOMAS-GREENFIELD: You know, it goes through my mind every single day. And that’s why we have been so aggressive in pushing for Member States to be on the right side here. We cannot make any mistakes here. We have to keep the pressure on Russia. We have to call out what they’re doing. We know what they’re doing is committing war crimes. And we need to start the process right now of helping the Ukrainians develop the evidence, collect the proof of these war crimes, and push this forward in the UN. And that’s why we’re pushing for a vote in the General Assembly tomorrow to kick – or suspend Russia from the Human Rights Council. And you asked me earlier about suspension: The reason a suspension is they have a three-year membership there and we’re suspending that membership for their three years.

AMBASSADOR THOMAS-GREENFIELD: You know, we meet, because we’re at the Security Council together, we meet with the Chinese on a regular basis and I can tell you that they are uncomfortable in this position. And you will note that in most of the votes, they abstained. They did not vote with Russia, they abstained with other countries. And while some countries abstentions were a disappointment, a China abstention was was seen as as an important message, that China is not full-board on Russia’s side in this unconscionable war against Ukraine.

QUESTION: Ambassador, thank you so much, indeed, for joining us. Ambassador Linda Thomas-Greenfield.