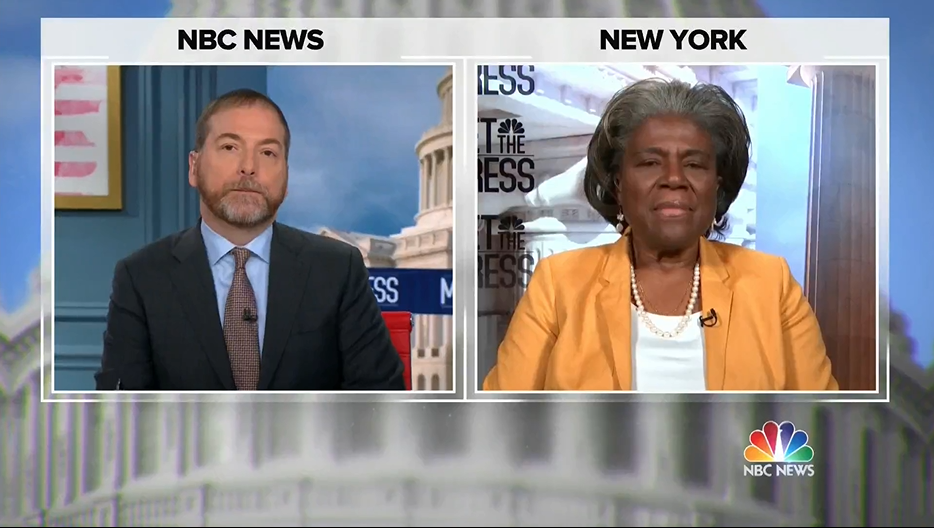 QUESTION: And joining me now is the U.S. Ambassador to the United Nations Linda Thomas-Greenfield. Ambassador, welcome to “Meet the Press.”

AMBASSADOR LINDA THOMASGREENFIELD: Thank you. Delighted to be here.

QUESTION: Over the last 72 hours, we’ve seen almost a daily escalation in sanctions from the Western alliance, whether sometimes led by the United States, obviously Europeans have a lot to say about the SWIFT system. And I guess my first question is, why has it been sort of this daily escalation? Why couldn’t we have gotten all of this done on Thursday? Why has it taken till yesterday? And even that, we only have a partial removal of the Russian banks from the SWIFT system.

AMBASSADOR THOMAS-GREENFIELD: Chuck, you know, we made clear from the beginning that we will escalate as the Russians escalate. And that’s exactly what we have done. The President, in all of his announcements before, indicated that we will be prepared to put harsh sanctions on the Russians. They were aware that those sanctions were coming. And we have been consistent in applying those sanctions as we’ve seen the escalation by the Russians, in coordination, of course, with all of our European colleagues.

QUESTION: Are we at all going to get the Germans and the Italians to agree to go full bore here? I know they’re worried about energy. Is there any way to change that?

AMBASSADOR THOMAS-GREENFIELD: You know, I can’t speak for either the German or Italian governments here, but I can tell you that the President has been working very, very closely with his counterparts in both of these countries. He’s spoken, as you know, to the Germans, and we’ve engaged very closely with the Germans on this. And we’re unified in our approach to the Germans*. So, I can just say that we are continuing to assess what we can do moving forward. And the Russians can be assured that we will continue to put more and more sanctions as they continue to press more on the Ukrainian government.

QUESTION: When we were first announcing sanctions, we were told it was about deterrence. I want to play a few clips here from various officials.

VICE PRESIDENT KAMALA HARRIS: The purpose of the sanctions has always been, and continues to be, deterrence.

SECRETARY ANTONY BLINKEN: The sanctions are designed in the first instance to try to deter Russia from taking further aggression.

QUESTION: And then President Biden admitted this:

PRESIDENT JOE BIDEN: No one expected the sanctions to prevent anything from happening.

QUESTION: So, I guess the question is: How does this end now? Meaning, we’ve got – the sanctions did not deter. We’ve put in pretty harsh sanctions. We’ve gone through how it could be slightly harsher. But can this end with sanctions alone?

AMBASSADOR THOMAS-GREENFIELD: Well, Chuck, we’ve been very clear-eyed on this from the beginning. As the President noted, we were going to apply harsh sanctions. And initially, they were an attempt to prevent Russia from taking this aggressive action. But it is Vladimir Putin’s decision on whether he will stop what he’s doing and listen to the voices of the world, the voices that have condemned him, or he will continue. And if he continues, we will continue to apply sanctions. But at the same time, we were preparing for just this action. And the President has approved moving more troops to support our NATO colleagues. We’ve provided additional support to the Ukrainian government, just over the past few days,** close to $1 billion, and billions since this all started. So, we’re clear-eyed. This has been a two-pronged approach. We hoped that the Russians would listen to the pressures that we were putting them under, but they didn’t, so they have to continue to feel additional sanctions and additional pressures on their economy. And they will feel the pain.

QUESTION: President Zelenskyy called on Russia to be removed from the United Nations. You and I were talking beforehand, we know that there’s a charter. That is not something that can just be done with a vote or anything like this. But it is sort of odd that Russia’s currently in charge of the Council right now. It’s a rotation; I get how that works. And the world is trying to condemn Russia and it looks like the UN is just sort of feckless at this. How can the UN play a critical role here?

QUESTION: Do you expect another vote to try to condemn what Russia’s doing? I know there’s been some talk of that. And if so, do you think this time India, UAE, some others will get on board?

AMBASSADOR THOMAS-GREENFIELD: Well, we’re going to have a meeting – another emergency meeting of the Security Council today, in which we will make a decision to call for an emergency session of the General Assembly, which we plan to have on Monday. And then, hopefully later in the week, we will have a vote, possibly as early as Wednesday, on a General Assembly resolution that the Russians cannot veto.

QUESTION: I go back to – is there any penalty, any mechanism at all, to penalize the Russians’ behavior at the United Nations? Is there anything?

QUESTION: All right, Ambassador Linda Thomas-Greenfield, I really appreciate you coming on and sharing the Administration’s perspective. Let’s hope this works.

*Russians
**over the last year
***Fifty