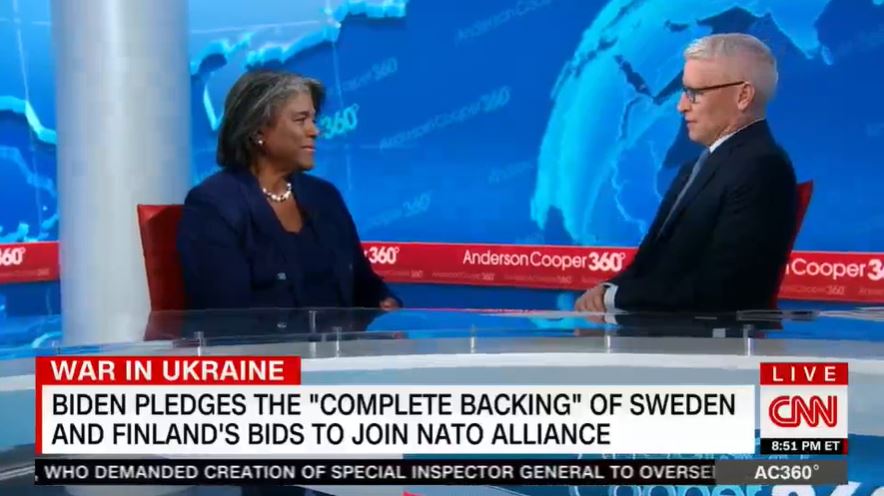 QUESTION: With us now is U.S. Ambassador to the United Nations Linda Thomas-Greenfield. Thanks so much for being with us.

QUESTION: How important is it for Finland and Sweden to join NATO?

AMBASSADOR THOMAS-GREENFIELD: I think for Sweden and Finland, it’s really important. They have been threatened by the Russians, and I think they are feeling the pressure. And they have been strong allies to NATO. They have strong armies. We think they will be great contributors to the organization

QUESTION: Is it – Erdogan’s resistance to it – is that something that could derail them joining?

AMBASSADOR THOMAS-GREENFIELD: I don’t think it will derail them joining it. It means that we will have to have more discussions within the alliance to work out the concerns that various nations might have. But our sense is this will move forward.

QUESTION: The war in Ukraine has obviously taken – it’s been unpredictable to say the least. The U.S. did predict that the invasion would take place. Many Ukrainians didn’t think it would. How do you see the situation now?

AMBASSADOR THOMAS-GREENFIELD: The war is continuing. But what we’ve seen is that the Russians didn’t achieve what they intended to achieve. So we warned early our allies, our partners, Ukrainians that we saw this coming down the pike. The Russians had the sense that they could go in and in a couple of weeks defeat the Ukrainians, and the Ukrainians would wave the white flag. That has not happened.

The Ukrainians have stood strong against the Russian aggression. They defeated the Russians in Kyiv, and they are continuing to fight. So this is not an easy battle. And what the Russians have succeeded in doing is unifying NATO, unifying our European allies, and really bolstering the resolve of the Ukrainian people.

AMBASSADOR THOMAS-GREENFIELD: We’ve heard that over and over again. But what we have achieved in the Security Council – we’ve isolated the Russians. And we were able to actually take the condemnation of Russia in a resolution to the General Assembly and got more than 140 nations to vote to condemn the Russians. So they are not succeeding with their veto in stopping us. Their veto is not allowing them to achieve the goals that they want to achieve.

QUESTION: Food security is obviously a huge thing. You spoke about it yesterday. The World Food Program chief said a failure to open the closed ports in Ukraine to get grain out could be, in his – in their words – a declaration of war on global food security.

AMBASSADOR THOMAS-GREENFIELD: It absolutely is a declaration of war.

QUESTION: And that’s going to have ripple effects around the world.

AMBASSADOR THOMAS-GREENFIELD: Absolutely. What the Russians are doing at this moment, contributing to this food insecurity crisis – some countries import more than 50 percent of their grain from Ukraine, and because of the Russian blockades in the Black Sea, because of Russian attacks on Ukrainian farms, because of the war, Russia has created this food crisis that we have already been dealing with for a number of years. And what they’re doing is making it worse.

QUESTION: And we’re going to see the ripple effects, not just in some cases in the U.S., but in North Africa, in the Middle East.

AMBASSADOR THOMAS-GREENFIELD: We’ve been having discussions with our African colleagues. Secretary Blinken hosted a ministerial in New York yesterday in which we brought a number of countries from across the globe together, and all of them expressed concerns about the impact of this food crisis on their countries. And in Africa, many countries, again, depend on more than 50 percent of their imports from Russia, from Ukraine, from this region, and all of them are being impacted now by this war.

QUESTION: Ambassador, I so appreciate your time tonight. Thank you.

QUESTION: And nice to meet you in person, too.

AMBASSADOR THOMAS-GREENFIELD: You, too.

By United States Mission to the United Nations | 19 May, 2022 | Topics: Highlights, Remarks and Highlights