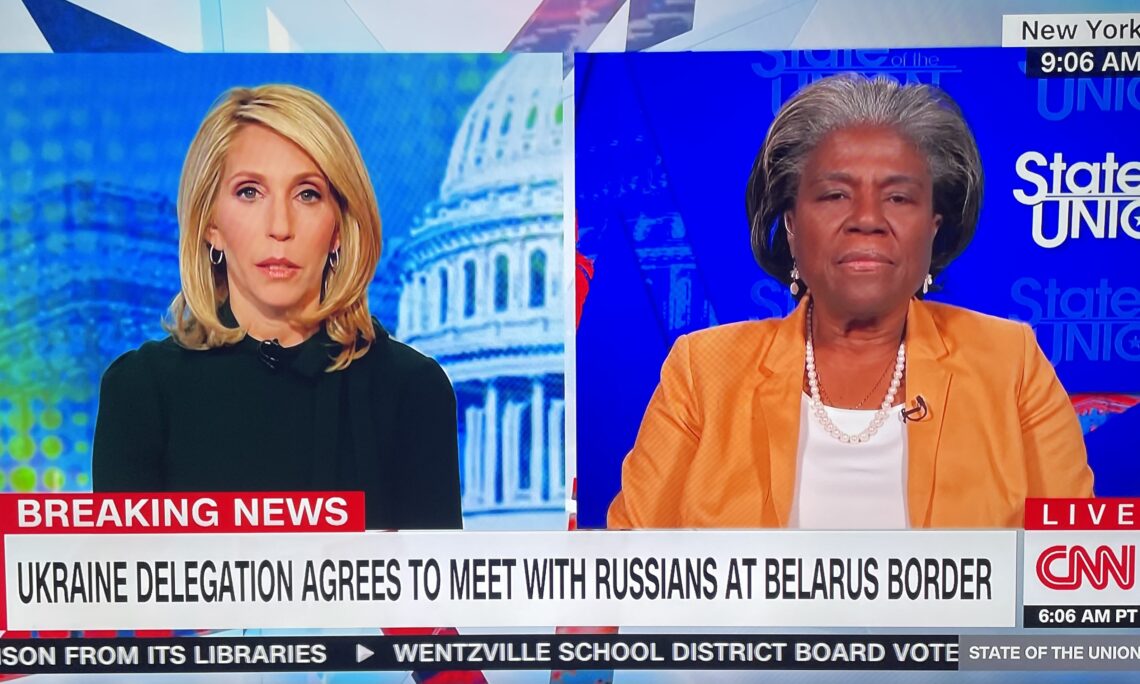 QUESTION: Joining me now is the U.S. Ambassador to the United Nations Linda Thomas-Greenfield. Madam Ambassador, thank you so much for joining me. Let’s first start with the news from the Ukrainian President Zelenskyy’s office that the Ukrainians and the Russians will meet without preconditions on the Belarus border. What are you hearing about that, and how optimistic are you?

AMBASSADOR LINDA THOMAS-GREENFIELD: That’s a decision that the Ukrainian government has to make and that they have made. And we’ll look forward to what comes out of those discussions. As you know, Dana, we leaned in on diplomacy with the Russians throughout this process and we hoped that Putin would find a way to the negotiating table. And he made the unfortunate decision of aggression over diplomacy. But again this news is another effort by the Ukrainians to find a way forward at the negotiating table.

QUESTION: Effort by the Ukrainians, but from the point of view of Russia, do you think, based on the diplomatic efforts that you were involved in up until now, that this is a good faith effort by the Russians?

AMBASSADOR THOMAS-GREENFIELD: I can’t get into the Russian – into Putin’s head or into Russian reasoning, so it remains to be seen. But let’s see what comes of it.

QUESTION: But the U.S. does support this move – this diplomatic effort?

AMBASSADOR THOMAS-GREENFIELD: We have always indicated that we wanted to find a diplomatic solution, and Russia chose confrontation. So again, this diplomatic effort is one more effort to bring the Russians to the negotiating table.

QUESTION: OK. Let’s turn to new sanctions that were announced by Europe and the U.S. saying that they plan to remove “certain Russian banks” from the SWIFT system, but it wouldn’t include the energy sector. As you know, that is a big part of the Russian economy. Why won’t you remove all of the Russian banks and transactions from SWIFT?

AMBASSADOR THOMAS-GREENFIELD: This process continues, and we’re putting together the list, and we’ll continue to work on that over the course of the next couple of days. Treasury can give you some details of what is going into the process. But the purpose of the sanctions are to put as much pressure on the Russian economy as possible. And we want to do as much as we can to protect the impact on our own economy. But we’re continuing to look at new and even harsher measures against the Russians.

QUESTION: You said that the things you are putting in place now, you want to make sure to protect the U.S. and, I’m sure, allied economies, as well. Are you saying by including the energy sector that that would put a burden on our economies?

AMBASSADOR THOMAS-GREENFIELD: We have not take anything off the table. We’re continuing to look at this. We’re ramping up as the Russians ramp up. So there’s more to come. And while energy is not in this current announcement, it doesn’t mean it’s off the table. But we also want to do everything we can to protect our own economy from the impact of this.

QUESTION: OK. So you also, as I mentioned, announced sanctioning the Russian Central Bank and its nearly $650 billion in reserves. And that’s a move intended to crater the ruble. How quickly will that happen? And are you worried that Russians will retaliate?

AMBASSADOR THOMAS-GREENFIELD: This is happening very, very quickly. And sanctioning the central bank keeps the central bank from providing protection to the ruble and to the Russian economy. Again, I can’t speak for how the Russians will respond to this. Vladimir Putin is very unpredictable. So it remains to be seen how he responds, but he should know that when he responds we will be prepared to respond, as well.

QUESTION: We’ve seen some remarkable resilience from the Ukrainian people. But they’re also pleading for more weapons to fight back. Secretary of State Blinken announced up to another $350 million to that end. Is there anything more that the U.S. can do? More military support, air support, intelligence, imposing a no-fly zone in Ukraine?

AMBASSADOR THOMAS-GREENFIELD: We have provided not just this $350 million, close to a billion dollars over the last couple of days,* and billions since this situation started. And we’re continuing to working Ukrainians on the requests that they have, delivering support to them on the ground, and also bolstering our NATO Allies on the border with Ukraine so that they are prepared to respond to Russian aggression.

QUESTION: And what about the no-fly zone? Is that something that’s on the table?

QUESTION: Madam Ambassador, we’re hearing from people on the ground in Ukraine reports of civilian deaths, seeing the damage to civilian buildings. President Zelenskyy just this morning said that Vladimir Putin is committing genocide and he should be tried as a war criminal. Do you think that Vladimir Putin is a war criminal? And should he be tried as such?

AMBASSADOR THOMAS-GREENFIELD: We’re holding the Russians accountable at every level. And I have to say we were appalled at the Russian use of the word genocide to describe what the Russians** are doing. They are the aggressors. And they have to be held accountable whether it’s in the United Nations or elsewhere and all of that continues to be discussed, that is on the table. As you know, we will be having a discussion in Geneva at the UN Human Rights Council, bringing Russia before the Human Rights Council, as well. And there’s another resolution that we’re bringing before the General Assembly in the special emergency meeting that we’re requesting tonight. So we’re keeping the pressure up on the Russians.

QUESTION: You didn’t mention war crimes tribunal in the Hague. Is that also on the table?

AMBASSADOR THOMAS-GREENFIELD: I think everything is on the table as we move forward. But as we’re dealing with the situation today, we’re continuing to address all of those issues.

QUESTION: During the very moment that you were giving your speech during the UN Security Council meeting urging Russia not to invade Ukraine, Vladimir Putin was launching his invasion. What was that moment like when you realized that was happening?

AMBASSADOR THOMAS-GREENFIELD: It showed the complete and utter disrespect that the Russians have for UN values, for the UN Charter. There was a buzz across the room in the Security Council as we all began to get information that this was happening on the ground as we’re speaking. So again, we’re not surprised. The U.S. warned about this for weeks in advance that this was going to happen any day. So, we weren’t surprised that they did it, but again it just showed to the world how much the Russians disrespect the UN system, and that again they are the aggressors here.

QUESTION: You will attend a meeting of the Security Council later today to vote on holding an emergency session of the UN General Assembly. President Zelenskyy said he talked with the UN Secretary-General about stripping Russia of its vote on the UN Security Council. Would you support that?

AMBASSADOR THOMAS-GREENFIELD: Russia is a member of the Security Council. That’s in the UN Charter. But we are going to hold Russia accountable for disrespecting the UN Charter. And they have been isolated in many different ways. So just to indicate, 80 countries joined us in co-sponsoring the resolution, more than 50 countries joined us at the podium to call out Russia’s aggression, so the fact of their sitting on the Security Council does not mean they’re protected from criticism, protected from isolation, and protected from condemnation.

QUESTION: Before we go, nearly 2,700 Russians have been detained in anti-war protests in Russia since Thursday. I wonder, what is your message to those Russian protesters?

AMBASSADOR THOMAS-GREENFIELD: We’ve noted this information, and what it says is that Vladimir Putin can’t hide what he’s doing in Ukraine. And those Russians who are protesting are extraordinarily brave to be protesting in their country. But again it indicates that he does not have 100 percent support in his own country for what he’s doing. And we encourage those people to continue to make sure their voices are heard.

QUESTION: Ambassador Linda Thomas-Greenfield, thank you so much for your time. Appreciate it.

*over the last year
** Ukrainians