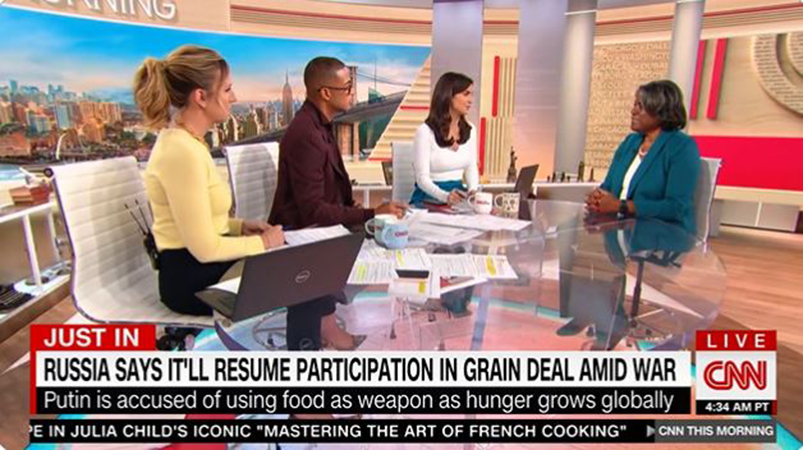 QUESTION 1:  Russia has just said it will resume its participation in the deal that allowed grain that had been trapped by the war in Ukrainian ports to continue to be exported. This has major impacts on the food supply around the world. Obviously, Russia threatened to suspend its participation, worrying officials. So we’re going to talk about this, all the other major, global headlines with U.S. Ambassador to the United Nations Linda Thomas-Greenfield, joining us on set. We are so grateful for you to be here this morning to answer our questions.

QUESTION 1: And so this is massive news. Russia had said it was going to suspend its participation. Now it is saying it will not do so. What are the implications of this? What do you think is behind Russia’s announcement here?

AMBASSADOR THOMAS-GREENFIELD: Well, I heard the news as I was coming into the show this morning, and I was delighted to hear this news. And I want to first commend the UN, the Secretary-General, in particular, for continuing to negotiate this important deal, because it’s providing needed food to the world. So clearly, Russia was finally convinced that they needed to continue this. They can’t stand in the way of feeding the entire world. Sixty-six million tons* of grain have been shipped from the Black Sea since this deal started. And the vast majority of that is going to poor countries in need of wheat. World Food Program, for example, gets about 50 percent of the wheat that it uses for humanitarian assistance from Ukraine and Russia.

QUESTION 2: What was behind this convincing do you think?

AMBASSADOR THOMAS-GREENFIELD: I think it was the fact that they benefit. They benefit from this deal as well, because it’s also moving grain from Russia. And just to make the point, this grain has never been sanctioned. The Russians tried to make that argument that we were sanctioning agricultural products. We’ve never sanctioned those products. And this is beneficial to Russia as well.

QUESTION 1: Can I ask you about Iran, because we have this new reporting yesterday on CNN, that is so important. We know Iran has been sending drones to Russia to use in Ukraine. We’ve seen Zelenskyy talk about that. Now CNN is reporting that they are talking about sending ballistic missiles, potentially, to Russia, which obviously would be significant. What can the United Nations do to pressure Iran to stop sending drones, to not send ballistic missiles to Russia to use against Ukrainians?

AMBASSADOR THOMAS-GREENFIELD: First and foremost, there are already sanctions against buying weapons from Iran. There’s a resolution that is being violated right now by Iran and by the Russians. And we are going to ramp up the pressure to bring other nations on board to condemn these actions, but also to hold Iran and Russia and any others who are dealing with Russia accountable.

QUESTION 1: And what does that look like, the ramping up of pressure on Iran?

QUESTION 2: This is a very simple question. And I think it’s an overarching question that Americans ask. It’s not Washington speak, right? What are we going to do about Vladimir Putin?

QUESTION 3: Ambassador, talking about Vladimir Putin, and that’s such a critical question you asked, Don. The G20 is coming up this month. Kaitlan will be there for us. And President Biden sat down with Jake Tapper, as you know, just a few weeks ago, and I want people to hear what he told Jake about possibly meeting with Russian President Putin. Here he was.

JAKE TAPPER: Would you be willing to meet with him at the G20?

PRESIDENT BIDEN: Look, I have no intention of meeting with him. But for example, if he came to me at the G20 and said I want to talk about the release of Griner, I’d meet with him. I mean, it would depend.

QUESTION 3: That was not a door closed answer. So I wonder if you think the U.S. sees – do you see – an upside for any kind of meeting, any face-to-face between Vladimir Putin and President Biden at the G20, especially if it could potentially lead to the release, for example, of Brittney Griner?

AMBASSADOR THOMAS-GREENFIELD: Well, I think the President was clear on what his intentions are. He has no plans to meet with Putin. But he did say very, very clearly – and this is something that is a high priority for the President and for the entire Administration is to get American citizens, including Brittney Griner, released from from Russia. So the President clearly indicated that he’s prepared to do that. But we’ve not seen any evidence that the Russians are prepared to release her.

QUESTION 3: We had our correspondent Will Ripley on this morning talking about the unprecedented move from North Korea overnight, firing 23 missiles, and the response from South Korea, just explaining to our viewers how unprecedented this action is. What is your reaction to that?

AMBASSADOR THOMAS-GREENFIELD: It’s unprecedented in the sense that they were so many–

QUESTION 3: In modern history, so many so fast. Exactly–

AMBASSADOR THOMAS-GREENFIELD: – this day, but they have been continuously launching missiles over the past year. And we have continued to condemn them because they break multiple Security Council resolutions. The Chinese and the Russians joined us in those condemnations earlier. Now they have protected this regime and we have to put pressure on them to improve on and really enhance the sanctions that we already have imposed on –

QUESTION 3: Do you suppose that Biden will say that to President Xi at the G20?

QUESTION 2: Engage with him. Is that what he’s going to say?

AMBASSADOR THOMAS-GREENFIELD: Well I can’t preview what the President will say, but I know that this is on the President’s mind.

QUESTION 1: I’ve got two questions for you that we definitely have to ask while we have you with us. And one, this new New York Times report this morning saying that senior Russian military leaders have met to talk about when and how Russia might use a nuclear weapon, if they do. Have you seen that intelligence that they are having those discussions? And what is it?

AMBASSADOR THOMAS-GREENFIELD: So I’m not going to share any intelligence that I’ve seen. But this is absolutely irresponsible. It is not the action that we would expect from a permanent member of the Security Council. They signed on themselves last year to a statement by the P5 that the use of nuclear weapons should never take place. And the fact that they’re doing this shows that they have no confidence in themselves, and they’re looking at every possibility to try to defeat the Ukrainians. And again, we will condemn these actions and bring this before the Council as well.

QUESTION 1: And the last topic for you. Israel is obviously having an important moment right now. And it looks like Netanyahu is about to potentially make a comeback. What’s the United States’ reaction to that?

AMBASSADOR THOMAS-GREENFIELD: You know, I can’t comment on the elections in Israel. But we’ll say that we have a close relationship with the Israelis. We support Israel in the United Nations, and their elections will be determined by them. But our support for Israel’s right to defend itself, for the unfair treatment of Israel in the United Nations, which I deal with on a regular basis, we will continue to fight against.

QUESTION 2: Listen, we’re going to – I’m going to keep you a little bit longer. I know that producers want to move on. But since we have you here, you’re an important guest, I have to ask you, because I know this is near and dear to your heart: What’s happening with Iran and human rights and women? And I know that’s an important subject for you.

AMBASSADOR THOMAS-GREENFIELD: It is an important subject. And today, we will be having something that we call an Arria-formula meeting on Iran, where we will be highlighting the conditions of Iranian women and supporting their right to protest. We will be bringing a number of countries together and hopefully send a message: One, to the Iranian women that we support them. But two, to the Iranian government that their actions are unacceptable.

QUESTION 2: Could we be doing more? Instead of standing by and giving our support and saying “we support, we support” could we –

AMBASSADOR THOMAS-GREENFIELD: We are doing more. So we have already sanctioned the morality police, and we’re sanctioning others who are engaged with these protests and what they’re doing against the protesters. And we will continue to look for other actions that we can take to hold the Iranian government accountable for these horrific acts against women and other protesters.

QUESTION 2: Ambassador, we’re so happy that you came in this morning. Thank you for spending – you spent a little bit more time with us than we had expected. But again, these are really important topics, and we’re so glad to have you, of all people, weigh in on them. Did you get everything in that you wanted to talk about?

AMBASSADOR THOMAS-GREENFIELD: I did. Thank you very much. Thank you really appreciate You’re focusing on these important issues.

QUESTION 1: They are critical, critical to our audience and the world. Thank you for joining us.