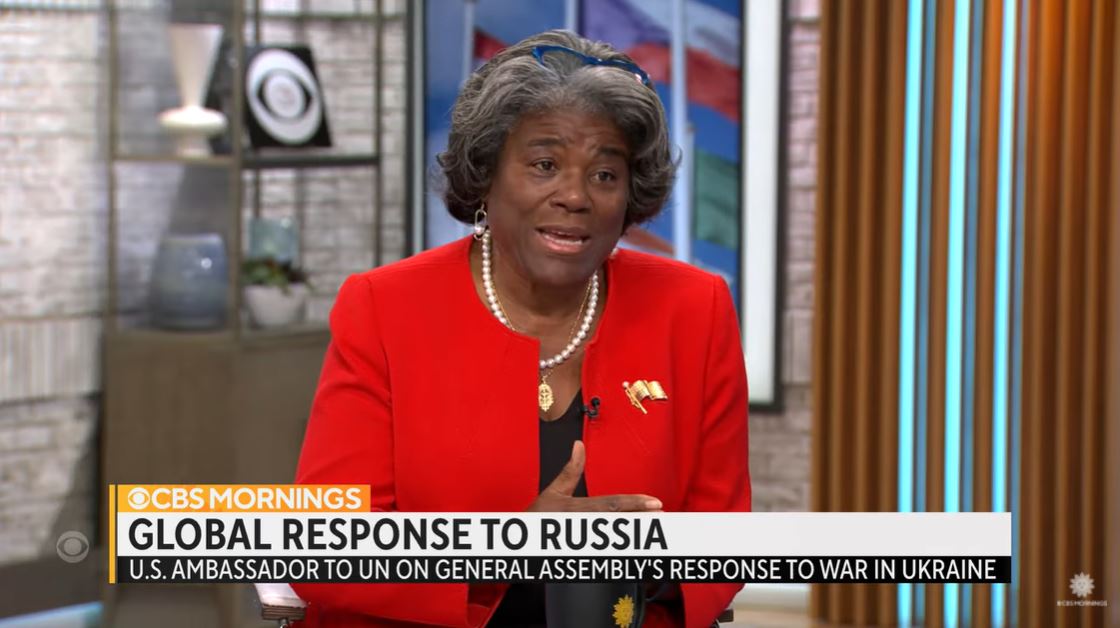 AMBASSADOR LINDA THOMAS-GREENFIELD:  Good morning. Thank you for having me here.

QUESTION 1:  So let’s talk about Vladimir Putin in his efforts to ramp up military efforts in Ukraine. He’s conscripting regular civilians now in his effort to destabilize Ukraine. What is the United States prepared to do to counter that action, given that Russia, as a permanent member of the UN Security Council, has veto power?

AMBASSADOR THOMAS-GREENFIELD: First, let me just say that this action on the part of Putin shows that they lack confidence it shows that they are on their heels and they are desperate. And the Security Council, over the course of the past six months, successfully – successfully – condemned and isolated Russia and they are feeling that isolation. We will be ramping that up. They heard it clearly during the Security Council meeting on Thursday, where Secretary Blinken sat in our chair. Putin’s foreign minister was there. He only came in to speak and he left immediately afterwards because he could not sit and hear the condemnation coming from so many members of the Security Council while he was sitting there in the chair. In fact, the Foreign Minister from Ukraine said that he fled like Russian troops under attack. So they are feeling that isolation and we will continue to ramp that up. The world is unified. Europe is unified. NATO has been unified. None of this was expected by Putin. And so he’s desperate.

QUESTION 2: But Putin seems so unpredictable, Madam Ambassador. He keeps making veiled threats about using nuclear weapons, are you concerned about that? Should we take that seriously?

AMBASSADOR THOMAS-GREENFIELD: We are concerned, and we should take it seriously. This is a sign, again, that he is desperate. He’s desperate because his troops have not performed in the way that he had expected his troops to perform. And the Ukrainians didn’t perform the way he expected them to perform. They’re defending their sovereignty, their independence, they’re fighting for their lives, and they are winning.

QUESTION 2: But what do we do? What do we do and are you worried about Ukraine fatigue in this country, people are saying, “Oh, this war is still going on. We’re still giving a lot of money.” What should, and what can we do?

AMBASSADOR THOMAS-GREENFIELD: The Ukrainians are on the frontlines of the battle that impacts all of us. They are fighting for democracy. And we do not see fatigue at this point because we understand what they are going through. The support for the President’s actions have been bipartisan. And so, we will continue to be committed to giving them what they need to defend themselves, to put them in a stronger position so that when they eventually sit at the negotiating table with the Russians, they’re in a position to really negotiate from strength.

QUESTION 2:  Do you believe Ukraine will win this war?

QUESTION 3: China is one of the countries that has not condemned Russia’s invasion. And Putin has met with the Chinese president. What do you make of their action or inaction?

AMBASSADOR THOMAS-GREENFIELD: China has not clearly and roundly condemned Russia, but they also have not embraced Russia.

AMBASSADOR THOMAS-GREENFIELD: And so, the message that we heard was delivered by President Xi to President Putin in their meeting in Uzbekistan last week, certainly highlighted for us the discomfort that the Chinese find themselves in, in aligning themselves with Russia on this issue.

QUESTION 1: Are the Chinese looking at the actions that Russia has taken in the invasion of Ukraine and drawing any lessons when it comes specifically to Taiwan?

AMBASSADOR THOMAS-GREENFIELD: I think they are, and the lesson is that a country, or an entity, that is fighting for its life, will fight harder. And so, they’ve seen the unified response from the European community. They have seen the strong commitment that we have made to Taiwan’s defense. I will say, and the President has been clear, our policy on Taiwan has not changed. We still support a One China policy, but we’re also committed to Taiwan’s defense.

QUESTION 2: The other story dominating international headlines in Iran. We’ve reported this morning about the 22 year-old woman who was killed apparently because she did not have on the proper headscarf. What is your take on this?

AMBASSADOR THOMAS-GREENFIELD: First and foremost, just tremendous sadness and horror for what this –

QUESTION 2: Horror is the word, yeah.

AMBASSADOR THOMAS-GREENFIELD: – for what this young woman went through. Iranian women should be allowed to wear what they want to wear without having to worry about the so-called morality police coming in beating them to death, as we saw happen with this woman.

QUESTION 2: We all agree on that, but that’s not what happened. I mean, it is horrible and shocking, that this is happening in 2022.

AMBASSADOR THOMAS-GREENFIELD: Yeah. And we are seeing the demonstrations now on the streets of Ukraine – sorry, mixing-up my countries –

QUESTION 2: [Laughter.] We know what you mean.

AMBASSADOR THOMAS-GREENFIELD: – on the streets of Iran. And those demonstrators have been again attacked by the police. They should be allowed to demonstrate peacefully. The police have provoked them in terms of their attacks, but we stand with them, and we will continue to stand with them.

QUESTION 2: You’ve indicated that the United Nations is in need of reform. What do you mean by that? First, do you still like this job, you still like it?

AMBASSADOR THOMAS-GREENFIELD: I love this job.

AMBASSADOR THOMAS-GREENFIELD: I do love this job. It’s not an easy job, by any means. But it’s a job that has to be done, and somebody has to do it, and I am just honored that the President selected me to do this job.

QUESTION 2: But when you say “need of reform,” what are you thinking?

AMBASSADOR THOMAS-GREENFIELD: – the Caribbean, and other countries that we’ve already noted our support for – that they have the opportunity to be part of the decision-making component –

AMBASSADOR THOMAS-GREENFIELD: – and be represented in the Security Council.

QUESTION 2: All right, well, you know people so [Laughter.], you can get that done. We thank you for coming and sharing your thoughts and giving us a history lesson. I think it’s very helpful for people to hear. Always good to see you. Very nice to meet you.

AMBASSADOR THOMAS-GREENFIELD: Thank you so much, I’m really delighted to be here with the three of you.