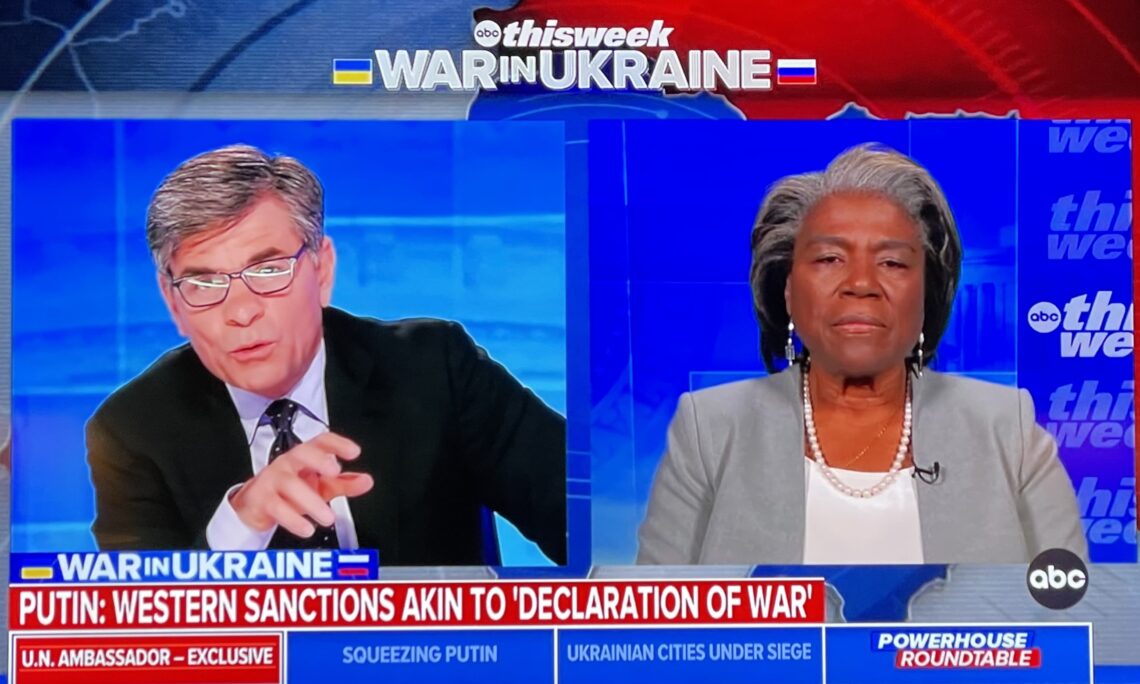 QUESTION: Let’s bring in America’s Ambassador to the UN right now, Linda Thomas-Greenfield. Madam Ambassador, thank you for joining us this morning.

Just moments ago Volodymyr Zelenskyy repeated his plea: he wants and needs that no-fly zone. Explain why President Biden will not fulfill that request.

AMBASSADOR LINDA THOMAS-GREENFIELD: George, President Biden has been very, very clear that American troops will not be put on the ground or in the air to escalate this war and make this an American war against the Russians.

But we’ve also been very clear that we will support Ukraine in every other way possible. We have provided them over $1 billion in support over the course of the past few days.* Billions prior to that. We’re providing them training. We’re working with our allies and the frontline countries – the border countries – to support their efforts as well.

QUESTION: You heard President Zelenskyy this week, he said that failure to impose the no-fly zone will mean that the blood of those who died is on the hands of the West.

AMBASSADOR THOMAS-GREENFIELD: We’re working to support him in every other way possible that we can support him. And we commend the strong efforts of the Ukrainian government and of President Zelenskyy. What President Putin has faced in Ukraine, he didn’t expect, as you just heard. And the Ukrainians have pulled out all of their stops to address this aggression by the Russians.

AMBASSADOR THOMAS-GREENFIELD: – to press others.

QUESTION: As a backup, you saw President Zelenskyy in a Zoom with members of Congress yesterday say that he needs fighter jets. And one of the plans that, supposedly, is in the works is that he would get those fighter jets – Soviet air fighter jets – from Poland, other Eastern European nations. The United States would replace those jets in Poland and those Eastern European nations with American jets. Is that on the table? Is that going to happen?

AMBASSADOR THOMAS-GREENFIELD: We have been in close consultations with the Polish government, as well as with our other NATO allies on this issue. We have not in any way opposed the Polish government providing these jets to Ukraine, and we’re working, as you noted, to see how we can backfill for them.

QUESTION: Could U.S. jets be provided to Poland and those nations?

AMBASSADOR THOMAS-GREENFIELD: We’re still in discussions with the Poles on that issue.

QUESTION: You also see increasing calls from Congress for tougher sanctions, including the banning of oil imports from Russia. The leading members of even the Democrats in Congress now calling for that, like Senator Dick Durbin. Is that something that is now on the table?

AMBASSADOR THOMAS-GREENFIELD: I am really delighted at the bipartisan attention this issue is getting on the Hill, and we’re working closely with them. I’m speaking to members of Congress on a regular basis, as well as others in the Administration, to see how our unified voice in the United States can be used to put added pressure on the Russians.

QUESTION: So is that a yes? Banning imports could be coming soon?

AMBASSADOR THOMAS-GREENFIELD: The President has been clear with President Putin that the consequences of his actions in Ukraine will be felt, and it will be felt by the Russians. At the same time, we’re trying our best to minimize the impact on our own country, on our own energy security, as well as the energy security around the world.

QUESTION: So it’s not a yes, yet. Our next guest is Senator Marco Rubio. I want to show a tweet he put out this week, where he said, “Russia has bombed residential apartment buildings. It has bombed sacred burial grounds. It has shelled kindergartens and orphanages and hospitals. But the president says it’s still too early to say war crimes have been committed?”

We just showed that footage of the bombing of civilian areas. Isn’t that a war crime?

AMBASSADOR THOMAS-GREENFIELD: Any attack on civilians is a war crime. And we’re working with partners to collect and provide information on this so that we can investigate this and have it ready in the event that war crimes are brought before this government.

QUESTION: You heard President Putin say that sanctions already in place are akin to a declaration of war. Yet, he’s still moving forward. What other sanctions are possible? Some have suggested not just freezing Russian assets but seizing them.

AMBASSADOR THOMAS-GREENFIELD: Well, as you know, some assets have been seized in Europe. Many of the oligarchs have seen their cruise – their properties seized in Europe. And we’re continuing to discuss with European colleagues how we can impose more sanctions and ensure that they’re felt by the Russian people.

We’ve seen the impact already of some of these sanctions. As you know, the ruble is worth less than a penny right now. The Russian Central Bank is not functioning completely. The stock market has been closed. So the sanctions are having the impact and Putin is feeling the results of those sanctions.

QUESTION: You’re saying he’s feeling the results, and many have suggested that Vladimir Putin is not acting in an entirely rational manner right now. What kind of incentives can the United States and the West offer him to move forward on that negotiated piece that Steve Ganyard was just talking about?

AMBASSADOR THOMAS-GREENFIELD: We have been working since the beginning of this to bring the Russians to the negotiating table. And that offer is still on the table, not just by us, but also by our European colleagues. And as you saw last week, even the Ukrainians sat at the negotiating table with them.

Putin has made the decision that he wants to continue with confrontation, with escalation, with attacks on civilians and to move forward in this war that Russia is feeling as much as anyone. We’re seeing that hundreds of Russian troops are being killed every day. Russians are demonstrating in the streets against this.

So clearly President Putin is feeling the consequences of his actions. But I can’t explain why he has continued to move forward in the aggressive way that he’s continuing to do in Ukraine.

QUESTION: Madam Ambassador, thanks for your time this morning.

*in the past year
**UN General Assembly