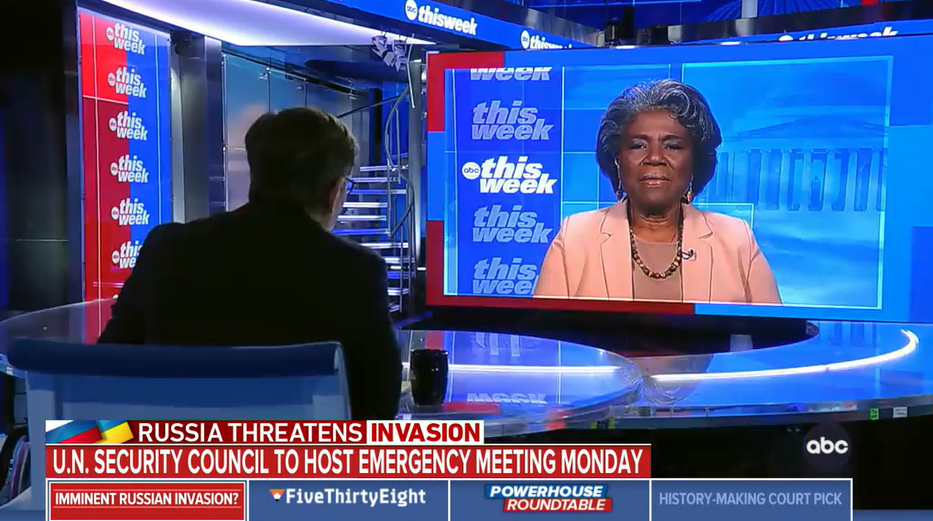 QUESTION: We are joined now by the U.S. Ambassador to the UN, Linda Thomas-Greenfield. Thank you for joining us, Madam Ambassador. Let’s begin with the UN Security Council meeting. Can Russia block it? If not, what do you hope to achieve?

AMBASSADOR LINDA THOMAS-GREENFIELD: Well, thank you very much, and I’m delighted to be here with you this morning. Russia cannot block the Security Council from holding a meeting. They will certainly attempt to. They will distract from our unified voices. But they know that they cannot block the meeting, and I expect that, knowing what we’re dealing with, that they will make an attempt. But the Security Council is unified. Our voices are unified in calling for the Russians to explain themselves. We’re going to go in the room prepared to listen to them, but we’re not going to be distracted by their propaganda, and we’re going to be prepared to respond to any disinformation that they attempt to spread during this meeting.

QUESTION: What’s your latest read on President Putin’s intentions? Does the U.S. believe an invasion is imminent?

AMBASSADOR THOMAS-GREENFIELD: Look, we’re all watching the press every single day. You’ve heard from several of us in the Administration. The Russians have amassed 100,000 troops along the border. They have moved troops into Belarus. They have continued to escalate despite our efforts to try to find the diplomatic route for them and to encourage them to de-escalate. And part of the reason we’re calling for this meeting on Monday is one more opportunity to find the diplomatic way out for the Russians.

QUESTION: President Zelensky and his team have expressed some irritation, even alarm, saying the U.S. is exaggerating the threat for political reasons. How do you respond with that?

AMBASSADOR THOMAS-GREENFIELD: Look, we have engaged very, very closely with the Ukrainian government. As you know, President Biden spoke with President Zelensky. President* Blinken traveled there. I’m meeting on a regular basis with the Ukrainian ambassador here in New York. Ukraine also called for this meeting. They actually sent a letter to the Security Council calling for the meeting. We’ve also been working with the Ukrainians on building up their defenses in the event of an attack. And over the course of – since 2014 we provided close to $5 billion in support to them, $200 million of that was just provided in the past week. So, again, we’re engaging with them to be prepared. We’ve seen the Russian playbook before. They are using disinformation. They’re encouraging Ukrainians not to worry about an attack, but we know that the attack is possible. You don’t amass 100,000 troops if you don’t have intentions to use them.

QUESTION: So that sounds pretty ominous right there. But what could a diplomatic settlement look like?

AMBASSADOR THOMAS-GREENFIELD: You know, first it would mean Russia making the decision to de-escalate, to pull their troops back and to come to the diplomatic table and talk with the United States, with the Ukrainians, with our NATO Allies about their security concerns. We’ve made clear that we’re prepared to address our concerns, Ukrainian concerns, and Russian concerns at the diplomatic table. But it cannot be done on the battlefield.

QUESTION: Finally, I want to ask you about North Korea. They had their seventh ballistic missile test this month last night – the longest-range missile they’ve tested since 2017. What’s behind this flurry of tests, and how will the U.S. respond?

AMBASSADOR THOMAS-GREENFIELD: It is provocative, and it is something that we have very, very strongly condemned in the Security Council. The United States, as you know, imposed unilateral sanctions in the past few weeks against the DPRK. And we have pushed for sanctions within the Security Council. And I will be engaging with our allies – the Koreans, as well as Japanese, who are also threatened by this – to look at other options for responding.

QUESTION: Is it time for President Biden to engage personally with Kim Jong-un?

AMBASSADOR THOMAS-GREENFIELD: You know, we have been clear on that from the beginning. We are open to having diplomatic discussions. We’ve offered this over and over to the DPRK. And they’ve not accepted it. But we’re absolutely open to a diplomatic engagement without preconditions. Our goal is to end the threatening actions that the DPRK is taking against their neighbors.

QUESTION: Madam Ambassador, thanks very much for your time this morning.