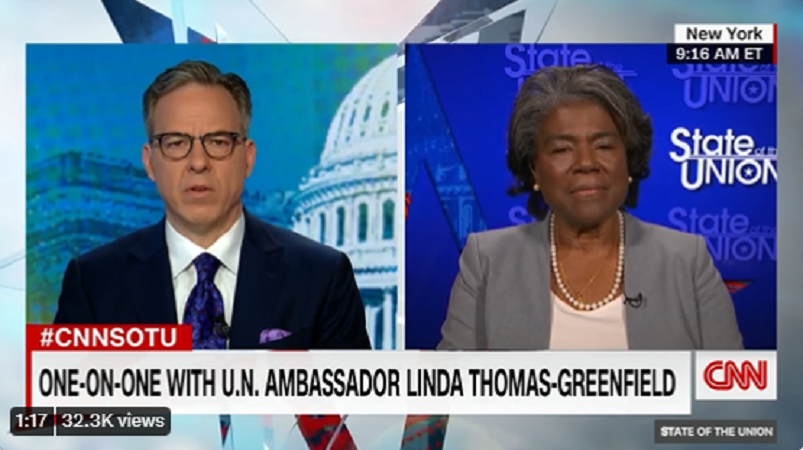 QUESTION: Joining us now to discuss, the U.S. Ambassador to the United Nations Linda Thomas-Greenfield. Ambassador Thomas-Greenfield, thank you so much for joining us. You heard President Zelenskyy say that without negotiations they cannot end the war. He also warned about World War III if negotiations fail. Do you see a negotiated settlement between Ukraine and Russia as the only practical way to avoid World War III?

AMBASSADOR LINDA THOMAS-GREENFIELD: It certainly is an important factor. And we have supported the negotiations that President Zelenskyy has attempted to do with the Russians, and I do use the word attempted, because the negotiations seem to be one-sided, and the Russians have not leaned into any possibility for a negotiated and diplomatic solution. You know, we tried quite a bit before Russia decided to move forward in this brutal attack on Ukraine, and those diplomatic efforts were not responded to well by the Russians, and they’re not responding now. But we’re still hopeful that the Ukrainian effort will end this brutal war.

QUESTION: I know some in the West are concerned that President Zelenskyy, under understandable duress with his people being slaughtered, might give away too much to make a deal with Russia to stop the slaughter. Some of the items being raised in these talks include Zelenskyy and Ukraine ruling out entirely joining NATO and just staying neutral, complete demilitarization of Ukraine with security guarantees from other countries, ceding Crimea, ceding the Donbas republics as independent republics. Is that too much? Are any of those items acceptable to the U.S.?

AMBASSADOR THOMAS-GREENFIELD: You know, this is for the Ukrainians themselves to decide what is too much for them. It is not our decision on that, and we support their efforts. So, I can’t preview what they will end up coming up with in their negotiations with the Russians, but they know, and I think the President Zelenskyy has been clear, people are dying. Russian soldiers are dying. But so many Ukrainian citizens are feeling the impact of this. So, he has to take all of that into account as he approached the Russians at the negotiating table.

QUESTION: Would the U.S. recognize Crimea? Recognize these independent breakaway republics if Zelenskyy were to cede those areas in peace negotiations with Russia?

AMBASSADOR THOMAS-GREENFIELD: I can’t say that at the moment. We certainly have not recognized the independent Donbas regions that the Russians just declared as independent. But I can’t preview how we will respond to a negotiated settlement that the Ukrainians come up with the Russians to save the lives of their own people.

QUESTION: So, President Biden is traveling to an emergency NATO summit on Thursday. Poland says that they’re going to formally submit a proposal to NATO for a NATO peacekeeping mission to Ukraine. What might that look like? Would the U.S. support sending NATO peacekeepers into Ukraine?

AMBASSADOR THOMAS-GREENFIELD: You know, Jake, the President has been very clear that we will not put American troops on the ground in Ukraine. We don’t want to escalate this into a war with the United States. But we will support our NATO allies. We have troops, as you know, in NATO countries, and the President has made clear that if there is an attack on any of our NATO countries, under Article V, that we will support those countries and defend those countries.

QUESTION: I assume President Biden’s opposition to sending U.S. troops into Ukraine would include sending NATO troops, a NATO peacekeeping mission, even if it were not – even if there were not any U.S. service members in that mission into Ukraine?

AMBASSADOR THOMAS-GREENFIELD: Again, I can’t preview what decisions will be made at this NATO conference and how NATO will respond to the Polish proposal. What I can say is American troops will not be on the ground in Ukraine at this moment. The President has been clear on that, and other NATO countries may decide that they want to put troops inside of Ukraine. That will be a decision that they have to make.

QUESTION: President Biden spoke with Chinese President Xi Jinping on Friday for almost two hours. According to the Chinese readout of the call, Xi Jinping said, “He who tied the bell to the tiger must take it off.” That’s one of his favorite aphorisms, and it’s apparently Xi Jinping blaming the U.S., blaming NATO, for instigating the Russia invasion. Do you think China is going to give financial or military assistance to Putin?

AMBASSADOR THOMAS-GREENFIELD: Look, the President was also very clear about his discussion with President Xi, in which we made our position very well known to him that there will be consequences for China if China decides to provide substantial military or financial support to the Russians that allow them to avoid the sanctions. The conversation, as you said, was two hours long, but it was extraordinarily frank, it was detailed, and it was substantive, and we made our position clear to the Chinese. They’re in an uncomfortable position. They have been put in a position of defending Russia against their own principles of sovereignty and integrity of borders. So, they have to decide where they will go from this point and not sit on the fence and call out the Russian aggression for what it is and not put themselves in the position of defending what is indefensible.

QUESTION: The city council in Mariupol, Ukraine, says that several thousand people from Mariupol had been forcibly taken from their hometown to Russian territory against their will. They say that some of these Ukrainians were taken to camps. Some were then redirected to remote cities. Can you confirm? Does the U.S. know that that’s happening? And if it is happening, how disturbing is that?

AMBASSADOR THOMAS-GREENFIELD: I’ve only heard it; I can’t confirm it. But I can say it is disturbing. It is unconscionable for Russia to force Ukrainian citizens into Russia and put them in what will basically be concentration and prisoner camps. So, this is something that we need to verify. Russia should not be moving Ukrainian citizens against their will into Russia.

AMBASSADOR THOMAS-GREENFIELD: Jake, as you know, the Russians came to the Security Council on Friday with the spurious accusations that the U.S. was supporting Ukraine’s chemical weapons programs. And I’m not going to give that any more amplification here. What we see happening is, again, this is a false flag effort by the Russians. They are advancing what they might intend to do. We’ve seen that happen before. They are the ones who’ve used chemical weapons. They used them in Syria. They’ve used chemical weapons against their own people. And we are concerned that they may use chemical weapons in Ukraine. We’ve been clear, if they escalate to this level, we will respond aggressively to what they are doing. You’ve seen the consequences so far of our actions against Russia and against Putin, and they are feeling those consequences, and they will feel more if they take this unfortunate decision to use chemical weapons.

QUESTION: Lastly, three European heads of state visited Kyiv in the last week or so. Former Ukrainian President Petro Poroshenko suggested that President Biden should visit Ukraine on his trip to Europe this week. Is that on the table?

AMBASSADOR THOMAS-GREENFIELD: As far as I know, it’s not on the table. The President is going to Europe, and he will be meeting with all of our partners and allies there. I have not seen any discussions of the President going into Ukraine. But you have to remember we have discouraged Americans from going into Ukraine. This is a country at war. I can’t imagine that would be on the table.

QUESTION: UN Ambassador Linda Thomas-Greenfield. Thank you so much for your time this morning, Madam Ambassador.