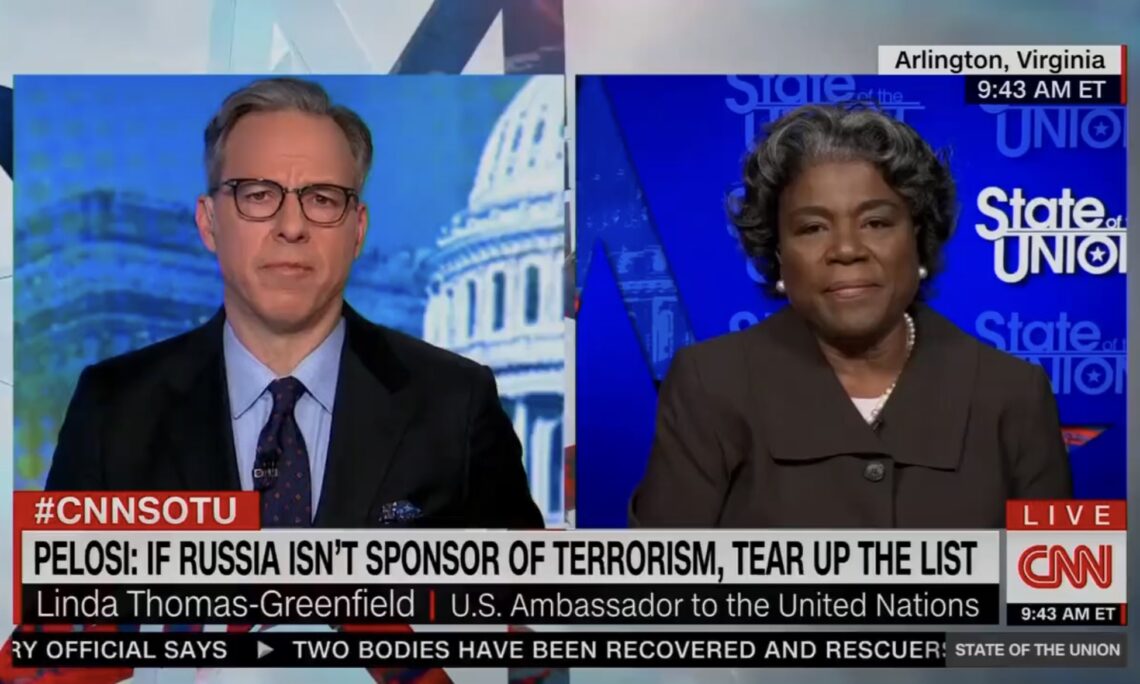 QUESTION: Tomorrow is May 9. It’s a major Russian military holiday called Victory Day. Russia celebrates the defeat of Nazi Germany. Reuters is reporting that, for the first time in more than a decade, Russia is going to conduct a flyover with its so-called Doomsday plane that would protect top Russian officials in the occurrence of a nuclear war. Would the Biden Administration view that as an escalation?

AMBASSADOR THOMAS-GREENFIELD: You know, the Russians have escalated throughout this process, and part of that escalation has been a consequence of their failures. They have nothing to celebrate tomorrow. They have not succeeded in defeating the Ukrainians. They’ve not succeeded in dividing the world, or dividing NATO, and they have only succeeded in isolating themselves internationally and becoming a pariah state around the globe. So what they’re celebrating tomorrow is their own lack of success.

AMBASSADOR THOMAS-GREENFIELD: We have called out the Russians very early on for committing war crimes, and this contributes to that. We’re going to continue to work with the Ukrainian prosecutors and others to document evidence of their war crimes so that they can be held accountable. This just adds to the long list that we already have.

AMBASSADOR THOMAS-GREENFIELD: The line is where the Russians started. The Russian government invaded Ukraine. They started this war. They are attacking the Ukrainian people. And we have been consistent since the start that we will support Ukraine, we will provide them with the wherewithal to fight this war. And they are on the ground and they are pushing back the Russians. So we will continue to provide the kinds of support that they need. We provided intelligence, but they make the decisions on what they will target and how they will target. And again, I think Russia has felt the consequences of our support for the Ukrainians.

QUESTION: Right, but I guess what I’m getting at is there’s this reluctance to acknowledge that we are giving this intelligence to the Ukrainians so they can do what they then do with it. I mean, we’re not giving them the location of a Russian general so that they can, you know, order UberEats for them. It’s with this express purpose of, here is where this Russian general is, go do what you’re going to do, and then the Ukrainians kill them.

AMBASSADOR THOMAS-GREENFIELD: We’re providing them with the intelligence so that they can defend themselves against Russian aggression and also put them in a position where they’re stronger at the negotiating table against the Russians. How they use that intelligence is up to them. But what we want to make sure is that they have the equipment and the information, the wherewithal to fight this war in a way that helps them to defend their own sovereignty.

AMBASSADOR THOMAS-GREENFIELD: Well, I think Russia has put itself on that list of state sponsors of terror. They are carrying out terror acts against the Ukrainian people, against Ukrainian civilians. You just mentioned they attacked a school with 90 people. Imagine the terror that these people felt as the school was being attacked. So they have defined their role on that list. It’s not necessary for us to put them on.

QUESTION: So you think that they deserve to be on the list, but you’re not saying that the Biden Administration is going to put them on the list?

AMBASSADOR THOMAS-GREENFIELD: They certainly deserve to be called out for the acts of terror that they are committing. We have said that they’ve committed war crimes. We’ve indicated that they – what they are doing is trying to destroy Ukraine’s actual existence. And what we have seen you and others reporting is unconscionable, and they need to be held to account for it.

QUESTION: First Lady Jill Biden, as I mentioned, just made an unannounced trip to Ukraine. You can see her now – we’re going to show the video of her greeting and hugging the Ukrainian First Lady during this humanitarian trip to the region. Will we see President Biden in Ukraine sometime soon?

AMBASSADOR THOMAS-GREENFIELD: I can’t preview what the President’s travel is going to be. But I can say that the First Lady’s visit has to have given so much support and encouragement to the Ukrainian women and children. And for her to go there on Mother’s Day to meet with the Ukrainian First Lady, I think sends a very strong, a very positive message. I met with Ukrainian mothers on the border when I traveled to Romania and Moldova a few weeks ago. I see the strength that these women have. So having the first lady there, encouraging them supporting them, actually in Ukraine, I think sends a strong message of support and commitment that the U.S. government has to supporting Ukrainians moving forward.

QUESTION: This weekend we learned that a new decree from the Taliban requires Afghan women to cover their faces and publicly – especially, they’re especially pushing the traditional burqa. If women don’t, they or their male guardian – that’s what it’s called, their male guardian – can be fired from their jobs, they can be jailed. Doesn’t this underline even further the problem of the U.S. withdrawal without a competent government in place?

AMBASSADOR THOMAS-GREENFIELD: You know, it shows again what the Taliban are capable of. We said from day one we will judge them by their actions, not their words. And these actions on Mother’s Day, I think, sends a very chilling message across the world. We have done everything possible to support Afghan women, and we’ll continue to call out the Taliban for their actions, both the United States, but also in my role in the Security Council as president of the Security Council. What they did today is unconscionable, and I am sure that we can expect more from them. And it just redoubles our commitment to supporting Afghan women moving forward.

QUESTION: Happy Mother’s Day, Madam Ambassador. Thanks for joining us today. We appreciate it.

By United States Mission to the United Nations | 8 May, 2022 | Topics: Highlights, Remarks and Highlights