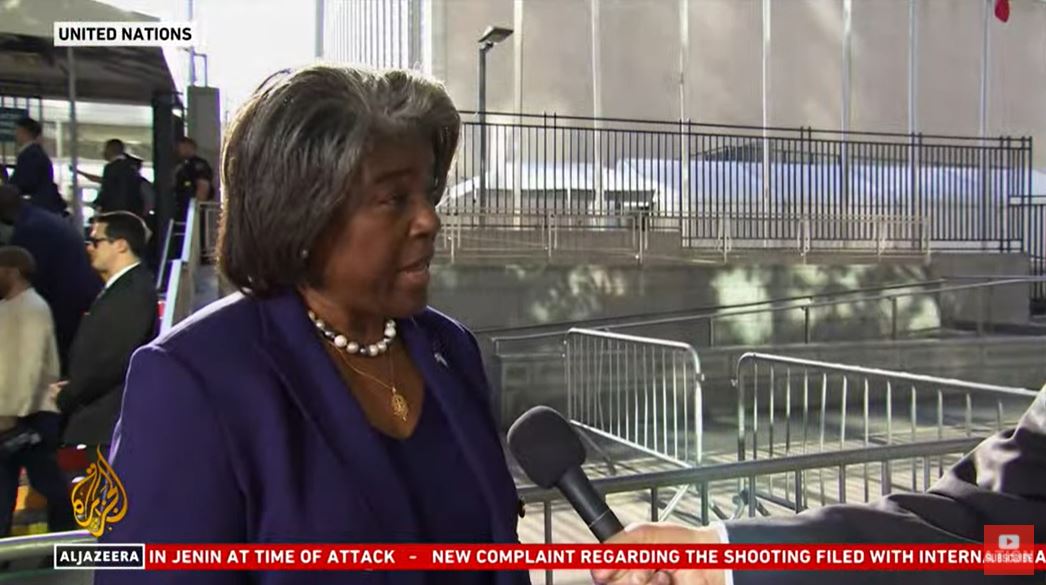 QUESTION: Al Jazeera’s diplomatic editor James Bays is at the United Nations headquarters in New York. He spoke with the U.S. Ambassador to the UN, Linda Thomas Greenfield, about what’s on the agenda.

AMBASSADOR LINDA THOMAS-GREENFIELD: We will be focusing on three major priorities. First and foremost, and you’ve heard me talk about this before James, we are laser focused on food insecurity and how to address the issues that the world is dealing with that has been exacerbated by Russia’s unprovoked war on Ukraine. So, we will be hosting today a Food Insecurity Summit that Secretary Blinken will be hosting with the EU, the AU, as well as Spain, where we will bring countries together to reaffirm their commitment to dealing with this global problem.

Second, President Biden has been clear in his commitment to dealing with issues of Global Health. And he will be hosting the replenishment of the Global Health Fund, and there he will announce, and you’ve heard us talk about it already, that the U.S. is committed to providing $6 billion of the $18 billion appeal that the Global Fund has made to deal with issues of tuberculosis, malaria, and other global issues.

And then, finally, we’re going to talk about UN reform. We’re going to talk about support for the UN Charter. Russia’s unprovoked attack on Ukraine is an attack on the Charter, and it has raised concerns and confidence about whether the Security Council is fit for purpose to deal with these kinds of issues. And we will be talking about those issues over the course of this week.

QUESTION: You’re going to have both the Russian Foreign Minister here and the Ukrainian Foreign Minister. Do you see any chance for any meaningful diplomacy? I hear behind the scenes, there is at least some talk of a prisoner swap.

AMBASSADOR THOMAS-GREENFIELD: The Ukrainians have never turned their backs on diplomacy, but they have to defend themselves. The Russians made a decision that they would prefer war, over peace, over diplomacy. So, if there are discussions taking place between the two of them this week, we encourage that, but we know that until Russia takes its troops out of Ukraine, it’s going to be very difficult to have meaningful diplomacy with them.

QUESTION: As you know, Russia is on the backfoot militarily. The talk now is Russia’s next tactic, which may be referenda in Luhansk and Donetsk. What will be the U.S. reaction if they tried to annex that territory as they did in 2014 with Crimea?

QUESTION: We’ve seen 6,000 square kilometers of territory taken back by Ukraine, just since the beginning of this month. There’s some criticism now from municipal deputies in St. Petersburg and Moscow of President Putin. What’s your message to those of influence in Moscow right now? Should they speak out?

AMBASSADOR THOMAS-GREENFIELD: Absolutely, they should speak out. Thousands of young Russian men have been killed in this war of Putin’s choice. It’s Putin’s ambitions that the people of, and the young soldiers of Russia, are having to pay for with their lives, and I’m delighted to hear that people are speaking out about this inside of Russia.

QUESTION: Turning to another part of the world, Iran. And you’re well aware of the case of Mahsa Amini, who died reportedly after being beaten by police; there have been big protests, too. Your reaction to her death and to the protests?

AMBASSADOR THOMAS-GREENFIELD: Her death is horrific. It shows the lengths to which the Iranian regime will go to stop peaceful protests and we mourn with the people of Ukraine* her death.

QUESTION: As you know, President Biden wants to go back into a nuclear deal with Iran. Talks are stalled at the moment. There are lots of people – particularly on Capitol Hill and in Israel – who are opposed. They might say this case shows that you should give up on diplomacy with Iran.

AMBASSADOR THOMAS-GREENFIELD: We will continue to look for efforts to engage with the Iranians because President Biden has been clear: The only way to stop Iran from obtaining a nuclear weapon is through this deal. There are other discussions on these other issues that we have to address as well, but Iran has a deal on the table. The EU put a credible deal on the table; Iran only has to accept it, and we will conclude that. But we will continue to deal with the other human rights issues and concerns that others have expressed, and concerns that we have.

QUESTION: Finally, the Secretary-General in his speech has said our world is in big trouble. Do you agree?

AMBASSADOR THOMAS-GREENFIELD: I do agree with the Secretary-General. We are dealing with a major attack on the UN Charter by a permanent member of the Security Council. And this has a global impact. So, the world is in trouble, but that’s why we have to continue to engage here at the Security Council. We have nations from across the globe here. We will be having discussions on how to address those issues moving forward in the future.

QUESTION: Ambassador, thank you very much for talking to us on Al Jazeera.