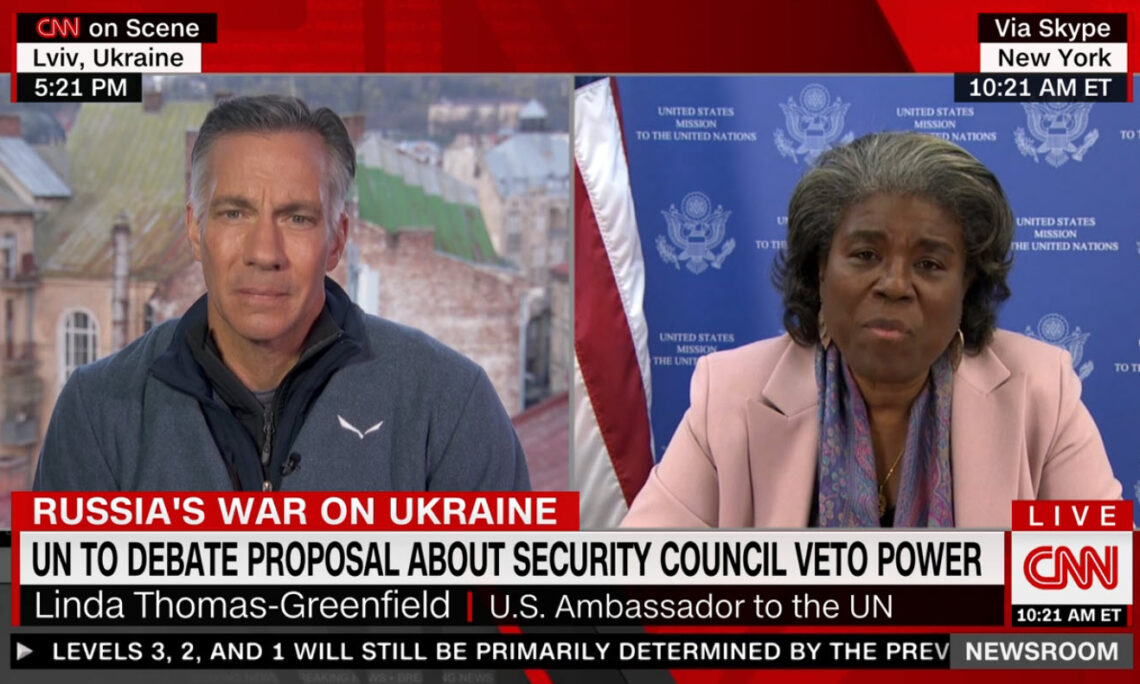 QUESTION: Today, the UN General Assembly will debate a proposal backed by Washington that would require any of the permanent five members of the Security Council to justify the use of their veto power. Since this war began, Russia has used its veto to paralyze any action against its invasion of Ukraine. There’s a long history of that at the UN Security Council. Joining me now, the U.S. Ambassador to the United Nations, Ambassador Linda Thomas-Greenfield. Ambassador, thanks so much for taking the time this morning.

QUESTION: So, this proposal – it’ll be introduced today by Liechtenstein, though backed by the U.S. – requiring permanent members to justify their use of veto. First, what is the likelihood of this advancing? But more so, will this have a real effect on actions in Ukraine are a largely symbolic one?AMBASSADOR THOMAS-GREENFIELD: It’s more than symbolic, for sure. And I do expect that it will succeed. This has been part of many efforts toward Security Council reform, and it will require that the five Permanent Members who have this extraordinary power to veto, explain their vetoes to the general membership. And we do support it because we think it’s an important part of what we do as Security Council members. We are representing many others in and using this veto power. And we are ready to explain when we use it, and we think the Russians and the other Permanent Members should be able to explain why they are using their veto power in the Security Council. So, we’ll be watching this vote in the coming hours, and we do expect that it will succeed.QUESTION:  The trouble is that Russia has been so willing to lie – shamelessly – about the war here. And by the way, this goes back: it blocked action for a UN observer mission to Georgia when Russia invaded Georgia; it blocked action for a UN investigation when it shot down MH17; and again any action after its invasion of Ukraine. I just wonder if the UN cannot stop a war in the 21st century in which we’re witnessing war crimes, perhaps everyday here, if it cannot do that, what is the UN’s true influence today?AMBASSADOR THOMAS-GREENFIELD: That’s an extraordinarily important question, and it’s one that we grapple with every single day at the United Nations. But we do have the power. We have the power to blunt the Russian veto. We have the power to isolate Russia, which we have successfully done over the course of this war. We have isolated them in the Security Council, and as you know, in the General Assembly. We have won three significant votes against Russia, including suspending them from the Human Rights Council. We call them out and condemn their actions in Ukraine, and we also supported a humanitarian resolution supporting the Ukrainian people.

Our goal has always been to support Ukraine, isolate Russia, and unify NATO and the rest of the world against Russia. And again, this has been something that we have proudly accomplished, and we will continue to work to isolate Russia as we’ve done in the past.QUESTION:  China’s role in this, of course, is central. It also has veto power in the Council, but it has a very deep and close relationship, publicly expressed, with Russia. We know, and we’ve reported, that Russia has asked China for both economic and military help in its invasion. You have said that China is “uncomfortable” with the progress of the invasion here. What evidence do you see of that? And you see China being willing to substantively check Russia’s invasion in any way?AMBASSADOR THOMAS-GREENFIELD: As you know, in a couple of the votes we held, China abstained. They did not vote with Russia, and that abstention signifies to us that they are uncomfortable with the relationship that they’ve established with the Russians, as it relates to Ukraine. China has always been a strong voice on the integrity of borders on the sovereignty of nations. And this is clearly in violation of the UN Charter, and it’s in violation of sovereignty of Ukraine.

So, they are in an uncomfortable position because they have to defend a country that is going against their core values, the core values that they have professed to believe it. And so, we’ve seen them waver. We’ve seen that they have been willing to abstain. They’ve also been willing to vote with the Russians, particularly on the suspension from the Human Rights Council. But as this war continues, I think China will be put in a position of having to determine whether they are going to continue to defend this aggression that Russia is involved in, to continue to defend the human rights violations and the war crimes that the Russians are committing, and if they decide to use their veto in support of Russia, they’re going to have to explain that to the entire UN.QUESTION: The phrase “never again” has been repeated in the halls of the UN in the decades since World War II. The fact is, on the ground here in Ukraine, we’re seeing atrocities committed – evidence of atrocities every day. Right now, we’re watching Mariupol, where we have 1,000 people sheltering in a steel plant with Russia deliberately bombing it. Russia has already bombed another shelter containing children in this exact – theater in Mariupol in the past. So, we know what they’re willing to do. I wonder if you think the world is failing now to physically prevent these things from happening? Yes, they’re penalizing Russia, but they’re not stopping Russia’s crimes here. Would you like to see more? Would you like, for instance, to see a UN-led mission to rescue these people now sheltering for their lives in Mariupol?.AMBASSADOR THOMAS-GREENFIELD: We absolutely will continue to find new ways to support the Ukrainian people. Enough has not been done, and we will keep trying to do more. We will keep the pressure on the Russians. Putin clearly doesn’t care how this is impacting his own people. And he doesn’t care at this moment about his own international reputation. But that doesn’t mean we have to stop putting pressure on him. And we will continue to do that. We will continue to support the people of Ukraine. And we will continue to bring the international community together to condemn what Russia is doing.

And I know for the Ukrainian people who are suffering these horrific attacks, the Ukrainian people who have witnessed the war crimes, this is not enough. I traveled to the region a few weeks ago. I was in Romania and Moldova. I had the opportunity to speak with women who had to leave their families, and their homes, and their lives behind to escape the atrocities that the Russians are carrying out. And they, too, are asking why can’t the international community do more? And what I was able to say to them is that we are doing everything within our power, and we will continue to ramp this up until the Russians get the message that it is time for them to stop their assault on the Ukrainian people and move their troops out of Ukraine. Our support for the Ukrainian people is absolutely strong, and the support that the Europeans have given has been absolutely strong. And the Ukrainians are aware of that support. Putin’s actions we can’t explain. He continues to move forward in this war of aggression against the Ukrainian people, but he will feel the pressure from the international community until he stops.QUESTION: We’ll be watching closely. Ambassador Linda Thomas-Greenfield, we do appreciate having you on the show this morning.AMBASSADOR THOMAS-GREENFIELD: Thank you very much.