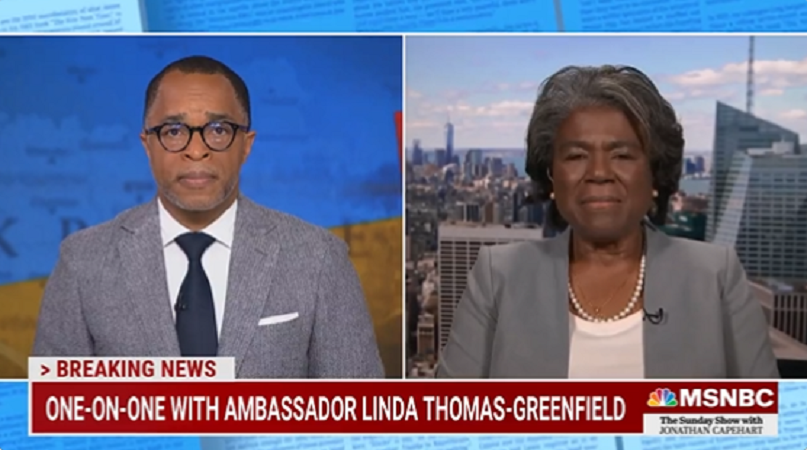 QUESTION: Joining me now is the United States Ambassador to the United Nations Linda Thomas-Greenfield. Madam Ambassador, welcome back to “The Sunday Show.”

QUESTION: So, President Biden and Secretary of State Blinken have said Putin has committed war crimes. Will it even be possible to hold him accountable for his atrocities, including today’s bombing of an art school in Mariupol?

AMBASSADOR THOMAS-GREENFIELD: Look we are seeing this happen every day in front of our eyes, and we’re working with our partners to collect evidence so that we are prepared to support any efforts that are made to hold President Putin and Russia accountable for the horrific brutality that they are imposing on the Ukrainian people. Attacking schools, attacking a building where children are, attacking apartment buildings and demolishing them, attacking people who are standing in line to get bread – all of this brings to mind to all of us that these really constitute what ought to be considered a war crime.

QUESTION: And given Russia’s actions in Ukraine, as you were just mentioning, targeting civilians in bread lines, art schools, and theaters, how concerned are you that Vladimir Putin will unleash chemical or biological weapons on the Ukrainian people?

QUESTION: Now, you’ve said in a recent interview that such an action, you know, that the West will respond aggressively. Well how – what exactly does that mean? How will the United States and the West, quite frankly, if Russia does indeed unleash chemical or biological weapons on the Ukrainian people?

AMBASSADOR THOMAS-GREENFIELD: You have seen the escalation of the Russians throughout this, and we have escalated the pressure on Putin. And we will continue to put additional pressure on him. We know that he’s feeling the pressure, we know that the pressure is being felt in the Russian – on the Russian economy. I’m not going to preview what we will do next, but I can say categorically that we and the rest of the world will respond to any use of chemical weapons by the Russians.

QUESTION: Let’s talk more about that pressure that’s being applied, particularly in the economic realm, Madam Ambassador. The Russian stock market is set to reopen tomorrow for the first time in a month. American and European officials have discussed targeting the Russian Central Bank with sanctions. When might those sanctions be applied?

AMBASSADOR THOMAS-GREENFIELD: Well we have already applied sanctions that are impacting the Central Bank’s ability to access funding, so Putin is not in a position to fund his war of aggression against Ukraine, because he’s not – he doesn’t have access to all of the money that he hoped to get through the Central Bank. And we’ve seen the impact of the sanctions on the Russian ruble. It’s worth barely a penny – maybe less than a penny. We’re seeing the impact of the sanctions on Russian elite who are not able to access their properties overseas. And certainly, Putin is feeling this himself, as well. There will be additional sanctions, and he’s very concerned about that.

QUESTION: President Biden, Madam Ambassador, as you well know, is headed to Brussels on Thursday to meet with European leaders to talk about the war in Ukraine – this special summit. What is the goal of this summit? What are we expected – what’s expected to come out of this meeting this week?

AMBASSADOR THOMAS-GREENFIELD: Well certainly the purpose of the meeting is to consult further with our partners and our allies on additional actions that we will take to address this aggression, this brutality that the Russians are carrying out in Ukraine, and to see what other measures we might take to increase the pressure. But it’s also to coordinate our support for our allies, and particularly those that are along the border with Ukraine, to see how we can give them more support so that they can support the people who are coming into their countries. We’ve given pretty close to $670 million in humanitarian assistance to support those countries. We want to hear from them what additional needs they have. Their generosity and their hospitality, it has been amazing, and we want to make sure we’re there to give them what they need to support the Ukrainian people.

QUESTION: Madam Ambassador, let me get you on three questions real quick. What’s the likelihood with President Biden being in Europe for that NATO summit in Brussels that he will either go to the Polish border, or the Hungarian border, or even go to Ukraine itself while he’s there?

AMBASSADOR THOMAS-GREENFIELD: You know, the details of the trip is still being worked out. But as you know, we have had lots of engagements with the Polish government. Secretary Blinken has been there, USAID Administrator Samantha Power, and then of course the Vice President was there. I met with the Polish Foreign Minister in New York last week. So, there is intense engagement with the Poles. The President has spoken to the President of Poland several times over the course of this. So, I, you know, again, details are being worked out. As I said in an earlier interview, I don’t know that there are any discussions of the President going into Ukraine. It’s a country at war, and we are defending the Ukrainians in every possible way. I don’t know that there’s a trip in the offing for the President there.

QUESTION: And last question for you, Madam Ambassador, reports out of Ukraine that Ukrainians are being shipped out of Ukraine and into Russia, into camps – I’ve heard the term “filtration camps” used. Can you confirm this?

AMBASSADOR THOMAS-GREENFIELD: I can’t confirm it. I find that story absolutely horrific. I do know that the Russians attempted to open what they called a humanitarian corridor to go into Belarus as well as into Russia, and the Ukrainians clearly objected to that. To force people from Ukraine to go into Russia is absolutely unacceptable; it’s unconscionable. And again, it’s something we need to confirm, but I don’t put it past the Russians to take such a horrific action.

QUESTION: Madam Ambassador would that be – if that story is confirmed – would that be an escalation on Russia’s part in its war on Ukraine?

AMBASSADOR THOMAS-GREENFIELD: Russia has done nothing but escalate – attacks on civilian infrastructure – it couldn’t be worse. So certainly, that would be another escalation, but not beyond the realm of possibility given how horrible the Russians have tried to put pressure on the Ukrainian people.

QUESTION: United States Ambassador to the United Nations, Linda Thomas-Greenfield, as always, thank you for coming to “The Sunday Show.”