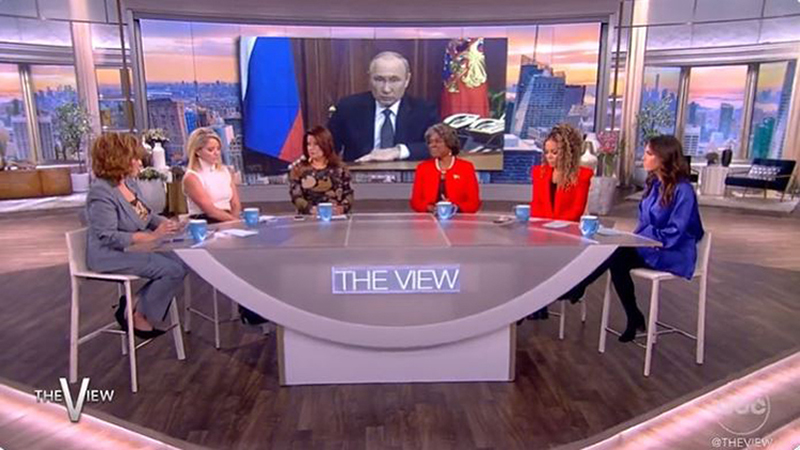 QUESTION 1:  As world leaders gather to address the most critical issues facing the planet and President Biden delivered some strong words on why Russia’s war on Ukraine should make everyone’s “blood run cold.” Joining us now is the woman at the center of it all, United States Ambassador to the UN, Linda Thomas-Greenfield. [Applause.] Welcome to the show.

QUESTION 1: Madam Ambassador, so, let’s start with Russia, OK? Here you have Putin. He’s growing more desperate as the war goes on in Ukraine.

QUESTION 1: He now has issued some kind of a, what do you call, conscription, and they’re fleeing like mad because they don’t want to go to war in his country. China and India have basically signaled they’re not really going to help him. And now he’s sort of rattling the saber about nuclear war, which is very frightening to listen to. Now, I’m old enough to remember the Cuban missile crisis –

AMBASSADOR THOMAS-GREENFIELD: Me too.

QUESTION 1: – when JFK made a deal with the Russians, with Khrushchev. Do you think that Biden can do something behind the scenes the way that Kennedy did during that time to stop this crazy talk and behavior?

AMBASSADOR THOMAS-GREENFIELD: We have been engaging with the Russians prior to their taking this horrible action against Ukraine. President Biden spoke with Putin, he met with Putin, we discouraged them from taking this action. And Putin was bent on doing this. They are clearly not ready for diplomacy yet, but we’re going to keep the pressure on them until he makes the decision to stop this effort of trying to wipe Ukraine off the map and intimidate the world so that we would bow to his will. And that is not happening. It didn’t happen in New York.  [Applause.]

QUESTION 1: Is Biden trying to make a deal, a backroom deal with him to save face and move on?

AMBASSADOR THOMAS-GREENFIELD: There is no backroom deal with the likes of Putin. He doesn’t understand backroom deals. That attempt was made. So now he’s in a war with the Ukrainian people. We are strongly behind Ukraine; they are defeating him. The saber-rattling that you describe is the sign of person who is desperate. He’s on his back heels. And he’s just making every attempt to intimidate us. And we’re just not going to bow down to that intimidation.

QUESTION 2: Madam Ambassador, thank you so much for being here. Iran is back in the news over – after the killing of Mahsa Amini, and the violent protests in the street and women speaking out for their rights. I know you are a big advocate for human rights and women’s rights abroad. But I have to ask as the Biden Administration thinks about reengaging in nuclear talks with Iran, can we trust the world’s greatest state sponsor of terror to actually be a real negotiating partner?

AMBASSADOR THOMAS-GREENFIELD: We have tried over the course of the past year to negotiate with the Iranians. We’ve actually put a deal on the table that we believe is a good deal that they should accept. Our bottom line in our national interest is Iran will never have access to a nuclear weapon. So, we’ve been clear on that. We think the deal with Iran is the best way to avoid that. And we will continue to engage in diplomacy to find a way forward.

Separate from that, however, is what we see happening in Iran today, and what they have done in terms of committing human rights violations against their own people. And we have taken actions to hold those individuals, the moral police as they are called, and those involved in the security sector who are committing human rights violations. We imposed sanctions on them just yesterday. [Applause.]

QUESTION 3: Madam Ambassador, you’ve served in diplomatic positions – many people may not know that – all over the globe,  from Liberia to Switzerland to Pakistan. But you come from very humble roots, much like my own, growing up, not in the Bronx, but in the segregated South – the deeply segregated South – in a neighborhood frequented by the KKK. Your father couldn’t read or write. And you were the first person in your family to graduate high school, going on to attend LSU with classmates like David Duke. Can you tell us more about that and how it shaped your worldview?

AMBASSADOR THOMAS-GREENFIELD: I’m looking at that picture you’re showing. [Laughter.] That’s where I started. I graduated from a segregated high school outside of Baker, Louisiana, where I grew up. And I would go on to Louisiana State University, and it was only four miles down the road, to be honest. But it could have been 1,000 miles away. Because it was a new world for me having grown up in the environment that I grew up in. And it was challenging. But as I look back on the challenges, the challenges are what created the person you see sitting in front of you today. [Applause.]

QUESTION 4: Madam Ambassador, over your 35 years of Foreign Service, you developed your own signature style of negotiation that seems to bring those humble roots back. It’s called gumbo diplomacy. [Laughter.] Can you tell us a little bit about that

QUESTION 3: And do you make a good gumbo? [Laughter.]

AMBASSADOR THOMAS-GREENFIELD: I make a good gumbo. [Laughter.] I do make a good gumbo. I’m sure that there are family members watching this now who are saying, “please.” [Laughter.] But for me, it was about bringing a little bit of my home to the places that I served in and using what I learned in my environment at home to develop relationships, to build friendships, and to carry out my responsibilities as a diplomat overseas.

QUESTION 4: Because your dad used to do that, like cook for people?

QUESTION 4: You took that gumbo on the road. [Laughter.]

AMBASSADOR THOMAS-GREENFIELD: I did. And I made gumbo –

AMBASSADOR THOMAS-GREENFIELD: And it’s culture. It is.

QUESTION 1: Well, we’re going to take a break, but we’ll keep you here for a little while longer. We’ll have more with U.S. Ambassador to the United Nations Linda Thomas-Greenfield.

QUESTION 1: We’re back with U.S. Ambassador to the UN Linda Thomas-Greenfield.

Ana, you have a question?

QUESTION 5: Yes. Well, Ambassador, we were talking on the break. And I just want to tell you how grateful I am that there’s little girls who can look at the screen right now and see people who look like them and see women in this role. [Applause.] I remember how much [inaudible] UN ambassadors meant to me as a little girl. So, thank you for representing. [Applause.]

We are seeing a change in the migration patterns. This has been in the news this week a lot because of the stuff that Governor DeSantis is pulling. But we’ve seen a change in the migration patterns from Latin America. It was first a lot of people coming from the Northern Triangle and Central America. Now we see more and more, it’s people from Venezuela, it’s people from Nicaragua, it’s people from Cuba. And, you know, I know how important and significant international solidarity – the international community speaking up is. I feel it doesn’t get spoken about much. And I’m a refugee from Nicaragua, so this strikes very close to home. Tell us, what can the United Nations do to confront the likes of Nicolas Maduro and Daniel Ortega and the remnants of the Castro regime in Cuba?

AMBASSADOR THOMAS-GREENFIELD: Well, first and foremost, one thing that I have been proud of during my 35 years serving overseas is that our country has always welcomed refugees. We’ve always welcomed people who are fleeing persecution, and people who are fleeing the situation in Venezuela, who are fleeing the situation in Nicaragua are fleeing persecution, they’re fleeing communism, they’re fleeing human rights violations, and we need to welcome those people to our country. In the United Nations, the Human Rights Council is an important vehicle for holding countries accountable who commit human rights violations against their people. And that’s where we need to push for more recognition of the situation that’s taking place in those countries. But more for what we do here in the United States, we have to do a better job of welcoming –

QUESTION 5: Under Trump, have we not left the Human Rights Council?

AMBASSADOR THOMAS-GREENFIELD: But we’re back in. We joined the first day of the Administration. [Applause.]

QUESTION 1: So, thank you very much for coming by. We really appreciate it. It was lovely to meet you.

QUESTION 3: Next time you can bring gumbo. [Laughter.]