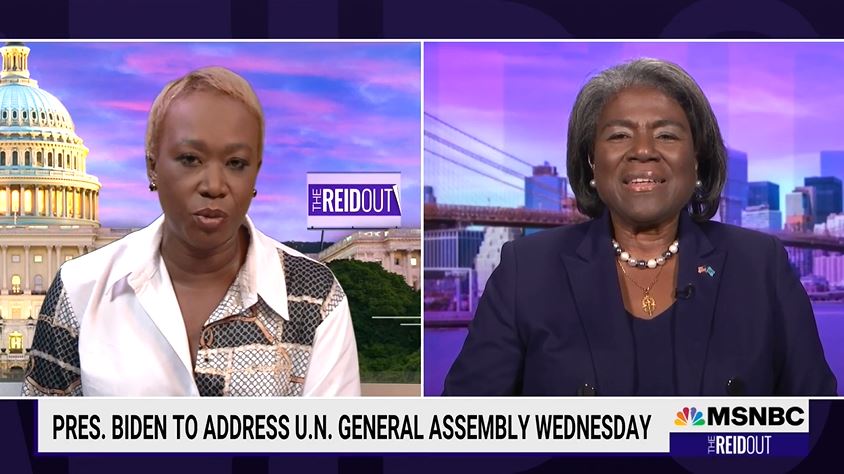 QUESTION: Ambassador Thomas-Greenfield, thank you so much for being here. I want to start there –

QUESTION: Thank you. I want to start with the situation in Ukraine. So Russia is threatening to hold these – what can only be called sham elections – and begin to annex parts of the territory that they’ve invaded in Ukraine. The U.S. has said there will be consequences if they attempt to annex and, you know, take chunks of Ukraine and annex them. What might those consequences be do you think?

AMBASSADOR THOMAS-GREENFIELD: The Russians know what those consequences will be. This is part of their playbook. They’ve done this before. They did it in 2014. And it was not accepted, and they know it will not be accepted again. They have been isolated in the international community and this is a desperate action by a country that does not have confidence in itself. We have imposed some very strong sanctions on the Russians in the past. I won’t preview what future sanctions or future actions might be, but they can be assured that we will take actions should they move in this direction.

QUESTION: You know, Russia has done everything from attempt to starve Ukraine, stealing their grain, disrupting the global food supply, threatening to turn off the gas in Europe – which probably should be getting off of Russian natural gas and oil anyway – but they’re using these tactics that attempt to terrorize all of Europe, not just Ukraine, to say nothing of the clear war crimes that they’ve committed throughout Ukraine. The United Nations as a body still allows them and admits them, they’re still in the Security Council. Does it in some way diminish that body for Russia to remain, and is there some way for them to no longer be a part of the Security Council?

AMBASSADOR THOMAS-GREENFIELD: Russia’s actions, their aggression against Ukraine, has raised concerns and it has raised issues and confidence about whether the UN is fit for purpose today. But we have used the Security Council, we’ve used the General Assembly, to isolate Russia, to condemn Russia, to kick Russia off of the Human Rights Council. They are a permanent member of the Security Council. That is something that we cannot change, but we will not continue to allow them to use that perch to terrorize the world with their actions. So, what they can expect will happen this week in the Security Council, is that they will continue to be isolated. It will not be business as usual for them. They will hear from the world – they will hear from the President of the United States at the podium of the General Assembly tomorrow – a rebuke of their unprovoked actions against Ukraine.

QUESTION: I want to talk a little bit about – Russia has accused the U.S. of imperialism and saying that our criticisms of their attack on Ukraine is an example of that. We are seeing the world kind of move in a direction to quit empire. You know, we’ve just seen the burial of the Queen of England, and you see a lot of nations in the Commonwealth saying it’s time to release ourselves, to free ourselves. Are we moving toward a world where these old empires will be defunct, and we’ll see more liberation and more independence for these smaller countries, these Caribbean countries, these African countries that want out?

AMBASSADOR THOMAS-GREENFIELD: Well, certainly we’re seeing that, but what we’re seeing Russia do is go back to the days of empire, the Soviet Union. They’re trying to reestablish their empire which is dead, it’s gone, and Ukraine is not theirs to take. It’s not theirs to have elections in. They have attacked a sovereign, independent country, and what they are trying to do is recreate their historical empire, and that is not acceptable. And the world has said that to them.

QUESTION: I want to ask you about something that’s happening in our country. You did administer issues of refugees and resettlement in your previous role. And we’re now seeing a state’s – governors of states – inside the United States using legal asylum seekers as political pawns and shipping them around the country. I wonder what the world makes of us when we’re gathering in New York for the General Assembly and sees inside our country governors doing things like that?

AMBASSADOR THOMAS-GREENFIELD: You know, it’s sad, and it’s unfortunate, and it’s embarrassing. These are people as you noted, who had fled persecution in their countries. They have come to the United States with hope and desires and we’re a country of immigrants. We have always welcomed immigrants into this country and to have them used as political pawns like this is totally unacceptable. And it is something that is not representative of what – of the values that we believe in in this country.

QUESTION: Should we expect President Biden to make a statement about that when he addresses the Assembly tomorrow?

AMBASSADOR THOMAS-GREENFIELD: I don’t know that he will address that in the Assembly tomorrow, but he certainly has addressed it to the American people. We saw a press conference that he gave earlier this week in which he expressed his concerns and his horror at what is happening to these people.