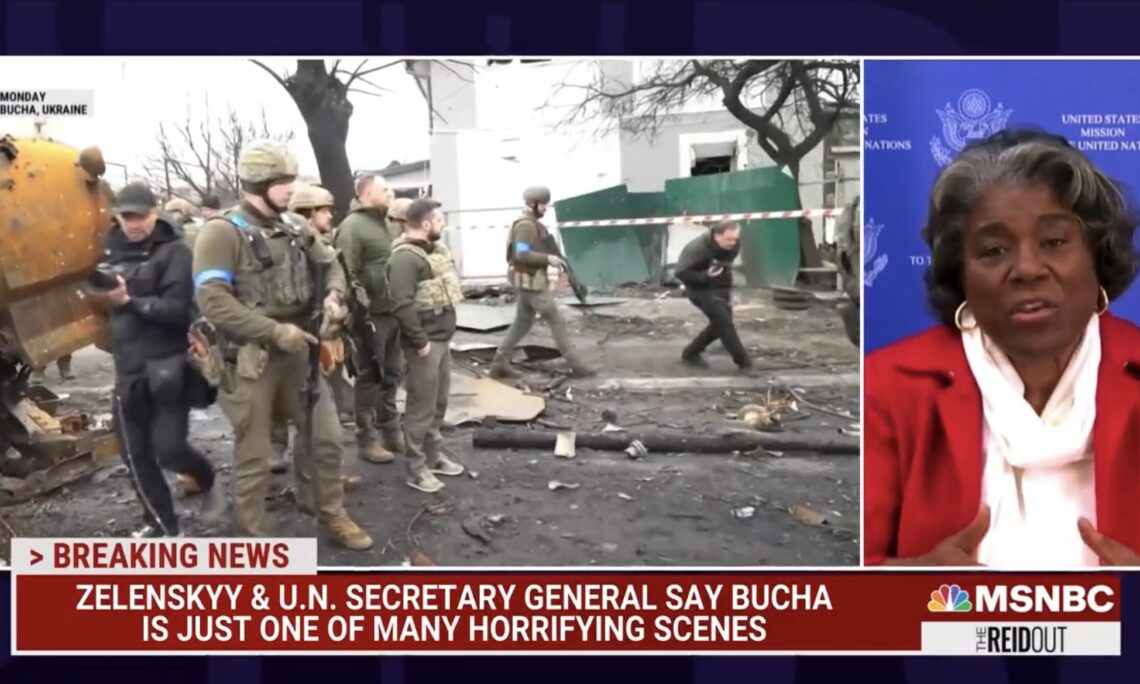 QUESTION: Madam Ambassador, thank you so much for being here. I want to get your reaction: In the room when that harrowing video was finally played, I know that there was a delay, of the atrocities that we’ve seen in Ukraine as perpetrated by the Russian military.

AMBASSADOR LINDA THOMAS-GREENFIELD: You know, we were all speechless. We had all seen various videos showing atrocities. But they all covered up the real, you know, the real people that were there, they were all blurred. This was the first time I’ve seen that video without the bodies being blurred. And it was horrific. And there was silence in the room. I can tell you that people were horrified. And it was an extraordinarily effective message to give to the Security Council, to confirm the atrocities that we all know have been carried out in Ukraine by the Russians.

QUESTION: I also want to get your reaction to the Russian Federation’s Ambassador Vassily Nebenzia. He also had something to say. Let me play a little clip of it for our audience:

AMBASSADOR VASSILY NEBENZIA: In spite of all factual evidence and common sense, you’re trying to lay the blame for their death on the Russian military. This is absolutely unacceptable. And the fact that you even consider that Russian military will be capable of this and now we’re seeing blatant, criminally staged events with the Ukrainian civilians who are killed by their own radicals. The only ones who could call for this fake are absolute dilettantes or our Western partners. We came to you, to Ukraine, not to conquer lands. We came to bring the long-awaited peace to the blood-soaked land of Donbas. We need to cut out the malignant Nazi tumor that is consuming Ukraine and would, in time, begin to consume Russia. And we will achieve that goal.

QUESTION: And then I’ve read through most of his speech, which is bizarre, and I wonder, A: What was your reaction to that? I know you were in the region not long ago.

AMBASSADOR THOMAS-GREENFIELD: I was incredulous.

QUESTION: Did you see any evidence of that when you were in the region?

AMBASSADOR THOMAS-GREENFIELD: No. We saw evidence of what he was talking about, but not evidence of anyone else doing it but them. I was in the region, meeting with women and children who had escaped that carnage. Who had left their husbands and, many times, elderly relatives behind. And they were worried about what had happened to their relatives. This was so incredible, that he would say that. The Russians would have us believe that this was all staged. And the truth of the matter, Joy, is before February 24, none of this was taking place in Ukraine. There were no bodies on the streets. There were no people being killed. There was no blood flowing. So, only Russia is responsible for this, and they would have us believe that the Ukrainians did this to themselves. It is absolutely ridiculous. And nobody believed it. He was talking to himself, because not a single person in that room believed what he said.

QUESTION: Yeah, it was clear he was doing that for an audience of one, meaning Vladimir Putin. President Zelenskyy has flat-out accused – and I think we’ve all seen the evidence of it – the Russians of war crimes. And we know that there are these two designations: There are crimes against humanity, you know, individually targeting individual people for slaughter and torture. And then there is also genocide; the idea of trying to wipe up people off the map. Do you believe that either of those two things have happened? Crimes against humanity, war crimes, and genocide in Ukraine?

AMBASSADOR THOMAS-GREENFIELD: War crimes and crimes against humanity have absolutely taken place and we are working with the Ukrainians to document the evidence so that we can prove it. That the Russians have committed atrocities, that they have committed war crimes. We saw evidence of that in the pictures out of Bucha today. And we all know that once we get into Mariupol, we’re going to see more evidence of atrocities being committed. This is not the first and we expect to see many more pictures like what we saw today.

QUESTION: And if in fact the UN, comes as a body to believe that Russia has committed crimes against humanity, war crimes, and maybe perhaps even genocide, they’ve expressed the desire, essentially to wipe Ukraine away, and get rid of it. What power – I think this is the question a lot of people are asking is – what power does the United Nations have? I think Presidents Zelenskyy in a way asked this, to enforce these global norms. Is there something that the UN can actually do to Russia?

And you have heard that I announced yesterday, and mentioned that today in my remarks, that we are going to move forward to suspend Russia from the Human Rights Council. They have not acted in any way to really give us confidence, that they deserve to be on the Human Rights Council. Or to continue to act as they are in the Security Council. They are a member. That’s a fact. We can’t change that fact, but we certainly can keep them isolated; we can keep them on their heels.

QUESTION: And we are literally out of time, but I’m going to sneak one more question in. Should they be kicked off the Security Council, and can that happen?

AMBASSADOR THOMAS-GREENFIELD: Look, the Security Council was created as a product of the creation of the UN after World War II. They are a member of the Security Council. That’s a fact. We can’t change that fact, but we certainly can isolate them in the Security Council. We can make their presence in that body very uncomfortable. And we have done that. And we are working to kick them off the, or to suspend them from the Human Rights Council.

QUESTION: Thank you, Ambassador Linda Thomas-Greenfield. The Ambassador will be honored tomorrow night by the Reverend Al Sharpton at the National Action Network’s “Keepers of the Dream Awards” gala for her career in public service and her leadership at the United Nations.