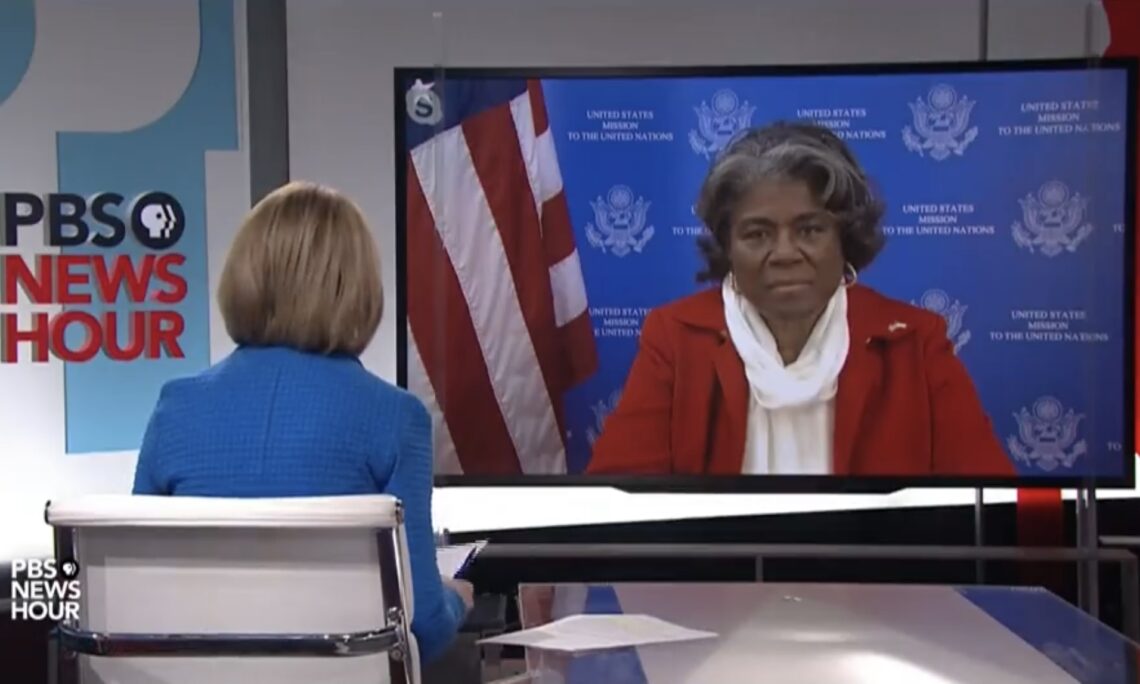 QUESTION: Madam Ambassador, thank you so much for joining us. I want to start by asking if you think the atrocities that we’ve seen in Ukraine, now that the Russian troops have repositioned themselves, change the responsibility of the West, of the United States, of the UN, toward this conflict?

AMBASSADOR LINDA THOMAS-GREENFIELD: Well, it certainly has changed us a great deal. Once we saw the pictures of those atrocities, it became clearer to us that the first action we needed to take, among many is to get Russia suspended from the Human Rights Council. It cannot present itself to the world as a country that respects human rights, and then carry out the kinds of atrocities and war crimes that they have carried out in Bucha, and in other locations in Ukraine. And so, as you may have heard, our intention is to ask for a vote in the General Assembly this week, calling for the suspension of Russia from the Human Rights Council.

QUESTION: But with all due respect, is there a reason to believe that removing them from the Human Rights Council is going to have any effect at all on Vladimir Putin? He’s enduring sanctions, his country’s been squeezed on the economic front, and still he’s plowing ahead.

AMBASSADOR THOMAS-GREENFIELD: Putin continues to carry out his war of aggression against the Ukrainian people, despite the impact of the sanctions and other pressure that is being put on the Russians, but they are feeling the pressure. They are feeling the isolation in the Security Council and around the world. They are feeling the condemnation, and we will keep the pressure on until he comes to the right conclusion. And that is, he has to pull his troops out of Ukraine. And in the meantime, we’re going to continue to support the Ukrainian people, the Ukrainian government in their efforts to defeat the Russians. As you know, I traveled over the weekend to Romania and Moldova, where I met women and children who had fled Ukraine, who fled the terror that the Russians are carrying out in that country, and it was heart-wrenching to hear their stories and to hear their pain, and their despair over the situation in their country.

QUESTION: Which is all the more reason to ask where’s the evidence that Vladimir Putin, and the people around him are feeling the pain from these sanctions. They continue to pound Ukraine in the East, in the South.

AMBASSADOR THOMAS-GREENFIELD: They certainly are, and we are going to keep ramping up the pressure on them until they stop. They can’t continue to do this forever. They have been really they have been pushed back by the Ukrainians, and the only thing that they have succeeded in doing is really, they’ve succeeded in unifying the Europeans and Americans. They’ve unified NATO, and they’ve given the Ukrainians greater will to fight.

QUESTION: At the same time, Madam Ambassador Russia continues to have a seat on the UN Security Council. They’re a permanent member. As long as they are a permanent member, does the UN have the teeth to make whatever resolutions it passes felt by the Russian leadership?

AMBASSADOR THOMAS-GREENFIELD: They are a permanent member of the Security Council that we cannot change, but we can isolate them in that position. And we have. We’ve succeeded in isolating them. We’ve isolated them in the Security Council. You may have heard the speeches today. Not a single country spoke without speaking of the horror that they are seeing happening in Ukraine and calling for the Russians to cease their unconscionable war on the Ukrainian people. They were isolated in the General Assembly. We got 140 votes condemning them. We got 140 votes supporting the Ukrainian need for humanitarian assistance. So, they are feeling the pressure, and they are feeling the isolation. And I can’t explain Putin’s actions, but I can say that what he is doing is a disgrace to their position on the Security Council, their position on the Human Rights Council.

QUESTION: Given the restraints on the United Nations because they sit on the Security Council, because they still have the support of China. Given all that, does the world needs to have some sort of alternative body? That enforces the rule of law, that enforces the kind of values that, frankly, humanity demands?

AMBASSADOR THOMAS-GREENFIELD: The UN is the body that we have, and we have to work to improve the UN and to continue to use this body to put pressure on the Russians. And while they do have the veto power, they can’t veto our voices. They cannot veto the Ukrainian president coming in front of the Security Council and condemning them. They cannot veto you, and others who are reporting the truth to the world. And they are uncomfortable. And as for the Chinese, they’re uncomfortable in this position that they find themselves in defending what the Russians are doing. So we’re going to keep the pressure on. We’re going to keep applying that pressure until Russia comes to understand that they cannot continue this unconscionable war against the Ukrainian people.

QUESTION: I want to quote you, Ambassador Thomas-Greenfield, something that President Zelenskyy posted today. He said, “Was it really necessary to wait for this? Did hundreds of Ukrainians have to have to die in agony for some leaders,” he said, “to understand the Russian state deserves the most severe pressure.” What would you say to him?

QUESTION: And as you know, he is continuing to ask, President Zelenskyy for more weapons, and he spoke again today, anti-tank weapons, anti-missile, anti-ship. He’s still not getting what he says he needs to put up the defense that Ukraine, in his words, has to put up in order to prevail.

AMBASSADOR THOMAS-GREENFIELD: We’re continuing to engage with the Ukrainian government on their needs. We provided the Ukrainian government close to a billion dollars before this started, and a billion dollars since this started. And we have provided them anti-tank weapons and missiles and we’re continuing to engage with them on other needs that they may have. In addition, other countries in NATO, and in the region, have been providing them with additional support.

QUESTION: And on the negotiating front, Madam Ambassador, we are hearing that these talks between the Russians and Ukrainians are going in circles. That the Russians are not taking this at all seriously, what is your understanding?

QUESTION: Ambassador Linda Thomas Greenfield, the U.S. Ambassador to the United Nations, thank you very much.

AMBASSADOR THOMAS-GREENFIELD: Thank you very much. It was great to be here with you.