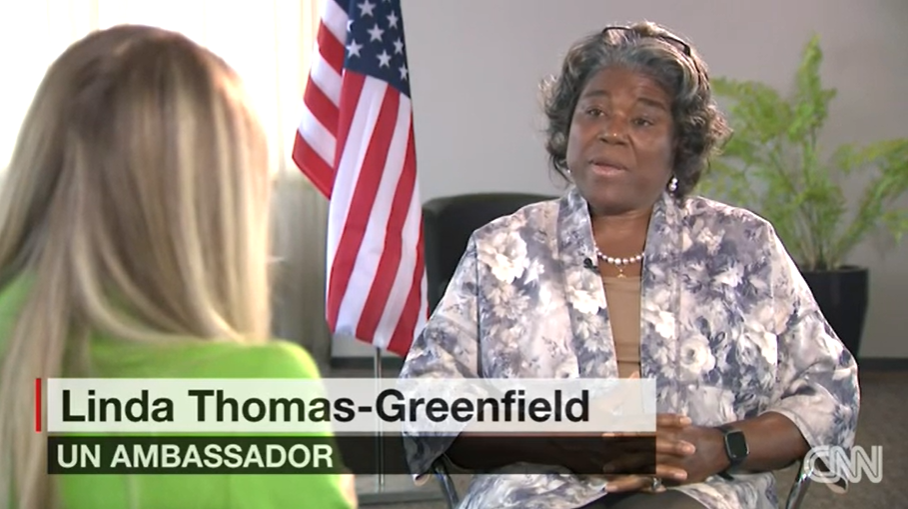 QUESTION: Watching what has come out thus far, President Putin didn’t declare a victory in the Ukraine war. He also didn’t formally declare war. And he didn’t signal escalation. But what he did do was talk about the Russian soldiers who are still fighting in the Donbas, and he didn’t signal that the – that Russia is going to be stepping back or de-escalating this. So, what does the United States make of his positioning in this speech?

AMBASSADOR LINDA THOMAS-GREENFIELD: I think that President Putin has recognized he has no victory to celebrate. His efforts in Ukraine have not succeeded. He was not able to go into Ukraine and bring them to their knees in a few days and have them surrender. He gave up on taking Kyiv. And he has moved to reassess his positioning in Ukraine. So there was no victory to celebrate. There was no reason for him to either declare a victory or declare a war that he has already been carrying on for more than two months.

QUESTION: Does the United States welcome the fact that he didn’t escalate things in this speech?

AMBASSADOR THOMAS-GREENFIELD: I would not use the word “welcome” because he’s still carrying out an attack on the Ukrainian people. It’s an unconscionable war on the Ukrainian people. We’ve seen what his machinery was able to do in Mariupol. We’ve seen the impact on the infrastructure in Ukraine. So what we would see as a positive sign is for Putin to pull his troops out of Ukraine and bring this unconscionable war to an end.

QUESTION: What does today signal about the current state of this conflict?

AMBASSADOR THOMAS-GREENFIELD: I think the conflict is not over for sure. And what it signals is that Putin will continue to move forward. He didn’t – as I said, he didn’t announce a withdrawal. He didn’t announce any new deals with the Ukrainians. So, I suspect – and we all assess that this could be a long-term conflict that can carry on for additional months. What we want to do is support the Ukrainians’ ability to defend themselves, but also give them more power at the negotiating table to negotiate with the Russians once they get to real negotiations.

QUESTION: With the Russians, you have to deal with them probably more than any other U.S. diplomat right now, just given the nature of the United Nations and sitting with them in UN Security Council meetings. Have you seen any difference in their tone or their approach to you since the war has begun?

QUESTION: How do you see that?

AMBASSADOR THOMAS-GREENFIELD: It’s the way they carry themselves and the demeanor. I will say that, for example, I don’t see the Russian PR in the Council as often as I saw him previously. So, sitting at the chair, he has either his deputy or some of his experts sitting in the chair much more often than I saw in the past.

QUESTION: And are they reading off of prepared remarks more often or anything like that?

AMBASSADOR THOMAS-GREENFIELD: Certainly, they’re reading off of prepared remarks, and they respond very appropriately. We know and expect when they will respond to things we say. But I suspect that everything is very much laid out for them and scripted.

By United States Mission to the United Nations | 9 May, 2022 | Topics: Highlights, Remarks and Highlights