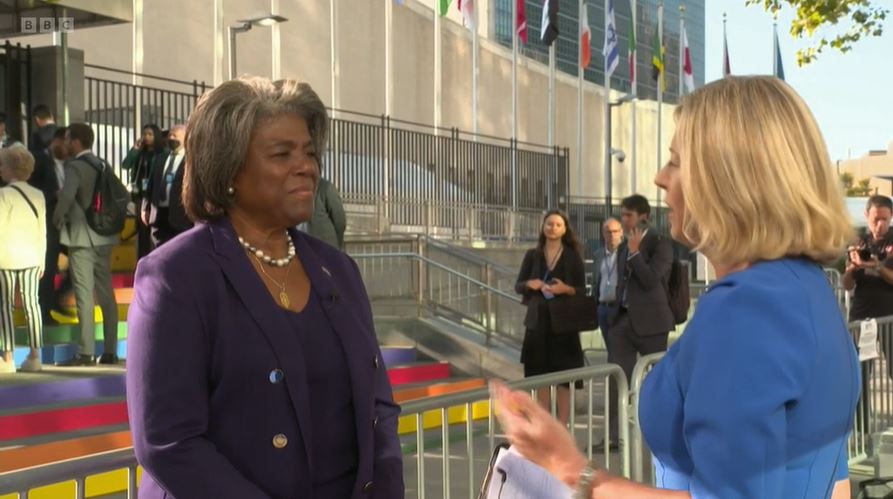 QUESTION: World leaders are gathering and we are joined now in fact by the United States Ambassador to the United Nations here in New York, Linda Thomas Greenfield. Welcome to BBC World News, Ambassador.

AMBASSADOR LINDA THOMAS-GREENFIELD: Thank you, delighted to be here.

QUESTION: Now, you said last week that the United Nations is facing a crisis of confidence because of the war in Ukraine. Because Russia, a permanent member of the UN Security Council, has invaded another UN member, Ukraine. What can this week do to restore confidence in the UN?

AMBASSADOR THOMAS-GREENFIELD: Well, first and foremost, we will continue what we have been doing over the course of the past six months, and that is condemning Russia, isolating Russia, and expressing our strong commitment to help Ukraine to defend itself. We want to talk about how we move forward to make the UN fit for purpose to deal with crises like this in the future – when a permanent member of the Security Council attacks another nation, attacks the UN Charter. This is something that really has developed into a crisis that requires all of our attention.

QUESTION: Are you, or will any member of the U.S. delegation, meet with Russia’s Foreign Minister Sergey Lavrov, when he’s here in New York this week, to try and figure out how to end this war?

AMBASSADOR THOMAS-GREENFIELD: We have no plans to meet directly with Lavrov, but as you know, there will be a Security Council meeting on September 22. Secretary Blinken will be sitting in the chair for the U.S. and Lavrov will be sitting in the chair for the Russians. And he will hear for the first time directly from members of the Security Council, our condemnation, our concerns, about their attack, and he will hear a call from all of us to withdraw their troops from the Ukrainian territory.

QUESTION: We’re going to also hear from President Zelenskyy of Ukraine. He’s going to make a prerecorded address to the UN because of the war. He’s going to ask for more weapons. Is the United States going to give him the tanks, the long-range missiles, that he wants, so he can capitalize on this momentum they’ve made in this recent offensive against the Russians?

AMBASSADOR THOMAS-GREENFIELD: We have been strong in our commitment to Ukraine. We will continue to support Ukraine’s rights to defend itself against this unprovoked invasion by the Russians. And we will continue to hold discussions with them about what they need to defend themselves.

AMBASSADOR THOMAS-GREENFIELD: I don’t think he’s going to spell that out on the floor of the General Assembly, nor will I spell it out here. But I think the Russians know, when we say consequential, what that means.

QUESTION: It’s really troubling countries of the global south, the fact that this divide between the U.S. and Russia and China, is really at its deepest since the Cold War. Countries of the global south feel that their crises, like climate change, are being ignored, and that the effect on them of the war in Ukraine – with accelerating food and energy prices – and that they’re just falling by the wayside. What would you say to that?

AMBASSADOR THOMAS-GREENFIELD: I would say to them that we are continuing to focus on those issues. As you know, our priorities this week for the UNGA is not just to deal with Ukraine. Ukraine will be front and center, I can’t deny that, but we’re also focusing on food insecurity. Secretary Blinken will be hosting a meeting today with the EU and the AU and Spain to talk about our commitments for dealing with the issues of food insecurity. We’re also talking about global health and how to deal with the health crisis and pandemics of the future. We’ve committed $6 billion to replenish the Global Fund. And we’re going to talk about the UN Charter and how we reform the UN to make it fit for purpose in the future.

QUESTION: Let’s pick up on that point. There’s so much resentment from countries that, basically the UN Security Council which runs this place – the victors of the Second World War are on it – America and Britain, China, Russia and France. You’ve said it’s time to reform the United Nations. Is it time to have an African country on the UN Security Council?

AMBASSADOR THOMAS-GREENFIELD: We’re open to discussions about expanding the Security Council so that it is more representative of the world. And those discussions will take place over the course of the next weeks and year to look at how additional members can become both permanent as well as selected members of the Council.

QUESTION: But don’t you think that’s something that Russia and China would just veto, especially if the U.S. is backing?

AMBASSADOR THOMAS-GREENFIELD: I would hope China and Russia would agree with us that it is time for the Security Council to change, and I note that Foreign Minister Lavrov, when he was in Africa, talked about Security Council reform and mentioned that Russia might be supportive. So, we will engage on this and see how far it gets us.

QUESTION: Ambassador Linda Thomas-Greenfield, the U.S. Ambassador to the United Nations here in New York. Thank you for joining us, and good luck with the diplomatic whirlwind ahead.