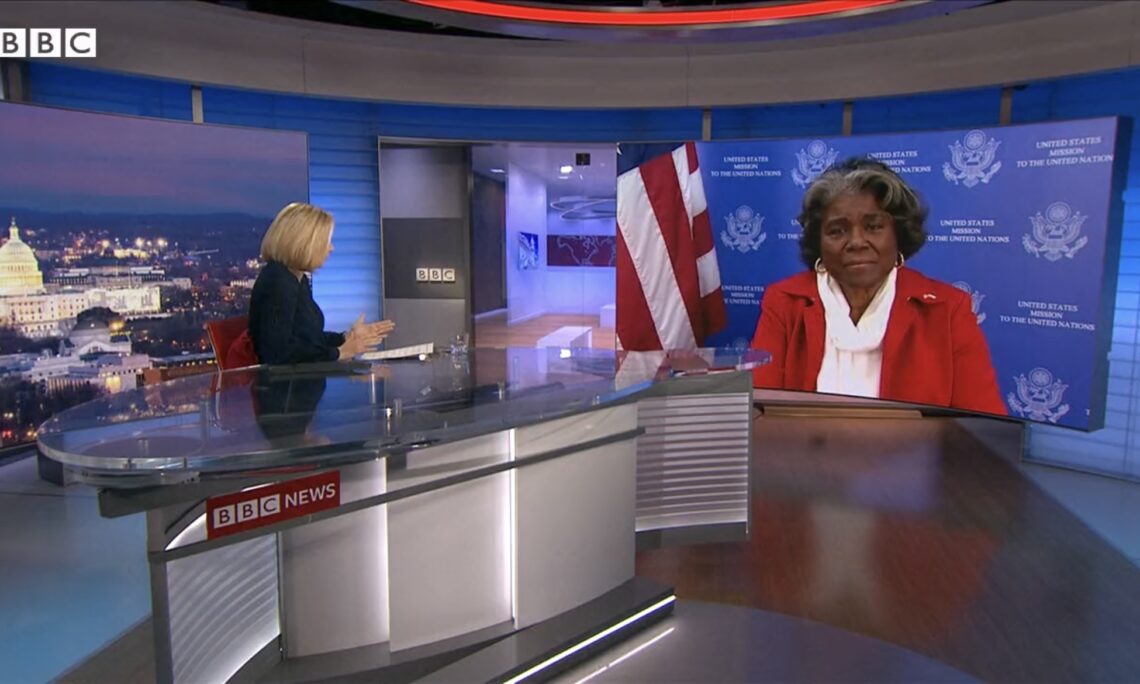 QUESTION: Ambassador, what was the atmosphere like inside the Security Council chamber when President Zelenskyy played that video of the atrocities in Bucha.

AMBASSADOR LINDA THOMAS-GREENFIELD: I think it was a sense of horror, a sense of sadness, and I really think a moment of truth where we were actually seeing for the first time the results of this horrible, horrible war that Russia has carried out against the Ukrainian people.

QUESTION: And yet, President Zelenskyy was scathing about the United Nations, saying that the Security Council cannot hold Russia to account because Russia is a Permanent Member and will veto decisions. He is right, isn’t he?

AMBASSADOR THOMAS-GREENFIELD: He is not exactly right. We are holding Russia to account. We have isolated Russia in the Security Council and I feel his frustration. He is under attack by by the Russians. No one can question his frustration with the Council and how the Council operates. The Russians do have veto power. But I have said over and over again, they cannot veto our voices, they can’t veto his voice. They couldn’t veto having him sit in the Security Council and hold the Russians accountable for what they are doing. So that was extraordinarily powerful. The Russians were on the defensive as you can see in the Council today and that was an important message for President Zelenskyy to deliver and it was an important message for the Russians to hear.

QUESTION: But President Zelenskyy actually said that the United Nations is powerless and he said it needed to reform or being closed. That’s pretty damning, isn’t it?

AMBASSADOR THOMAS-GREENFIELD: It was a very strong statement that I certainly think reflects the frustration that the Ukrainians are feeling. So again, I am not going to question his frustration. I was in the region over the weekend. I had an opportunity to meet with Ukrainians who had fled. It was extraordinarily emotional. Women and children describing their horror, their lives being torn apart, their fears about their relatives being left behind. So this is an extraordinary moment for the Ukrainian people. And what we have to do is everything possible to support the Ukrainians, isolate the Russians, and hold the Russians accountable. And we’re doing that in the Security Council. We’re doing it in the General Assembly, where we were able to get 140 votes condemning Russia, and we’re going to do it in the Human Rights Council when we vote on, this week, to suspend Russia from the Human Rights Council.

MODERATOR: Ambassador Linda Thomas Greenfield, thanks so much for being with us.

AMBASSADOR THOMAS-GREENFIELD: Thank you, Laura. It was great to be here with you.