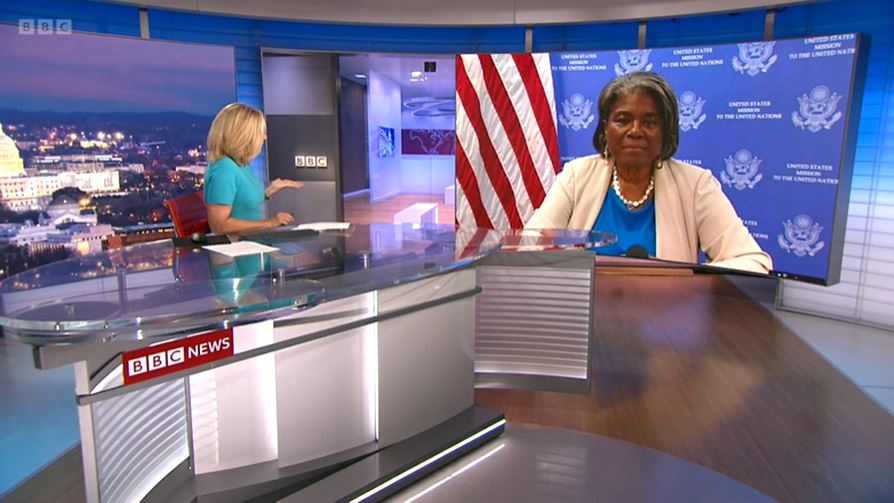 QUESTION: Ambassador, how concerned are you about the shelling in and around the Zaporizhzhya Nuclear Plant in Russian-occupied Ukraine?

AMBASSADOR LINDA THOMAS-GREENFIELD: We are very concerned about the situation around this plant. We’ve asked that the Russians leave this plant and allow for the IAEA to go in and do investigations to ensure that the plant is safe. And at this moment, they have not agreed to that, although they’ve asked for it. And as you know we will be holding a meeting in the Security Council – a meeting that the Russians called – where we will insist that they allow for the IAEA to have access to the plant. And that they stop using this plant as a military base.

QUESTION: Ukraine and Russia are blaming each other for the shelling around this nuclear plant. Does the United States have any intelligence about who is actually behind it?

AMBASSADOR THOMAS-GREENFIELD: We do not. But that’s the reason we want the IAEA to get in there to see exactly what is happening on the ground, and to ensure that the plant is safe. If there’s conflict going on around the plant, it needs to stop.

QUESTION: The United Nations Secretary-General is calling for a demilitarized zone around this nuclear plant. Does the United States support that idea?

AMBASSADOR THOMAS-GREENFIELD: You know, we support any efforts that will allow for this plant to be safely administered and making it a demilitarized area, which means having the Russians leave the plant is something that we support.

QUESTION: Ambassador, you have just been in Africa, where the war in Ukraine is driving up the price of food. You went to Ghana, Uganda, Cape Verde. What were leaders telling you? Are their people going hungry because of this war?

So, yes, all of the leaders recognize that there is an impact in their countries due to the war. They all call for an end to the war, but they also are looking for assistance and how to address these immediate concerns. And that was the purpose of my visit to talk to them about how we could assist.

QUESTION: And you were in Uganda, Ambassador, just a week after Russia’s Foreign Minister Sergei Lavrov was there. Did you find as much support in Africa for Russia’s narrative that it’s actually Western sanctions because of the war in Ukraine that are driving up food prices and affecting Africans?

AMBASSADOR THOMAS-GREENFIELD: I think Africans know the truth. They know that before this war started, they were not experiencing this level of shortages. I made clear to them that we have no sanctions on any agricultural products out of Russia – that Russia can export those products, they can buy those products. There’s no reason for Russia not to provide assistance. And I hope that when Lavrov was in Uganda, in Africa, that he talked about how Russia might facilitate providing more Russian wheat to the market.

QUESTION: Ambassador Linda Thomas Greenfield, thanks so much for being with us.