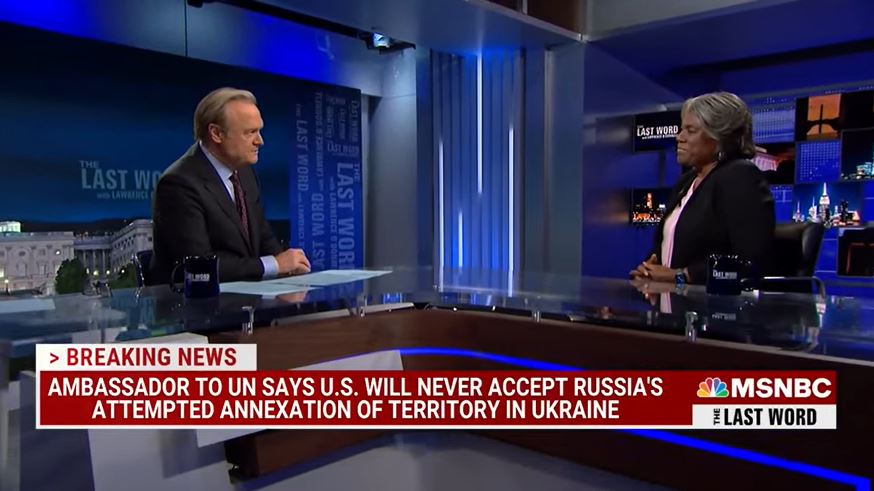 QUESTION: We are joined tonight by U.S. Ambassador to the United Nations, Linda Thomas-Greenfield. Thank you very much for joining us.

QUESTION: I know diplomats choose their words carefully, choose every word carefully. And the word that you generally use the least, is probably the word “never,” as in, the United States will never recognize any territory Russia attempts to seize. Was there any question about softening that sentence in any way – that you spoke today?

AMBASSADOR THOMAS-GREENFIELD: Absolutely not. If I could have used a stronger word, I would have.

QUESTION: What was it like today at the Security Council, given that Russia is a member with veto power? What is it like speaking against that power in that room?

AMBASSADOR THOMAS-GREENFIELD: We had 14 members of the Security Council today, say to Russia, loudly and clearly, that what they’re doing in Ukraine is unacceptable. And so, they heard from the entire Council. And their message was a message that we were not surprised to hear – that they thought – or tried to explain away what they were doing. But they did that on deaf ears, because what they’re doing is unacceptable. We will never accept it. We will give the Ukrainians everything they need to defend themselves. And thirdly, we will hold them accountable for what they are doing in Ukraine.

QUESTION: So there is the actual material support that President Biden is giving it. The allies are giving military equipment. Is it fair to look at the Security Council as the place where you deliver the verbal version of that military support?

AMBASSADOR FERGAL MYTHEN: Mr. President, these referenda will never deter us from supporting the people of Ukraine. Might does not make right. Nor will they have any legal or political effect on the status of Zaporizhzhya Nuclear Power Plant or other Ukrainian nuclear facilities. These referenda are a cynical ploy to not only further undermine Ukraine’s sovereignty and territorial integrity, but also to try and reset an unjustified war. This is a blatant land grab to redefine areas of Ukraine as part of Russia; a blatant land grab.

QUESTION: I have a stack of these here, ambassador – from Kenya’s Ambassador, member of the Security Council now, who has been so eloquent throughout on this. And as you go forward in this, what is the state of the alliance, the strength of the unity against Russia at this point.

AMBASSADOR THOMAS-GREENFIELD: The alliance is strong. NATO is stronger than it’s ever been. And the European alliance and partnership with the United States is stronger than it’s ever been. The condemnation of Russia continues to be strong in the Security Council. So, we are going to continue to put pressure on Russia. Their actions over the course of the past week, show that they are desperate, and it shows that they are weak. And we will continue to push against them to ensure that they do not get away with what they’re doing in Ukraine.

QUESTION: What do you envision as possible next steps at the United Nations?

AMBASSADOR THOMAS-GREENFIELD: Well, what we are planning, and I announced today, is a resolution in the Security Council condemning the annexation. We expect that Russia will do what Russia always does – they will veto it – but we hope to get solid support for it. We plan to have solid support for it. And then we will move it to the General Assembly if we have to, as we did in the past.

QUESTION: Ambassador Linda Thomas-Greenfield, thank you very much for joining us at the end of another very stressful day there. Really appreciate it.