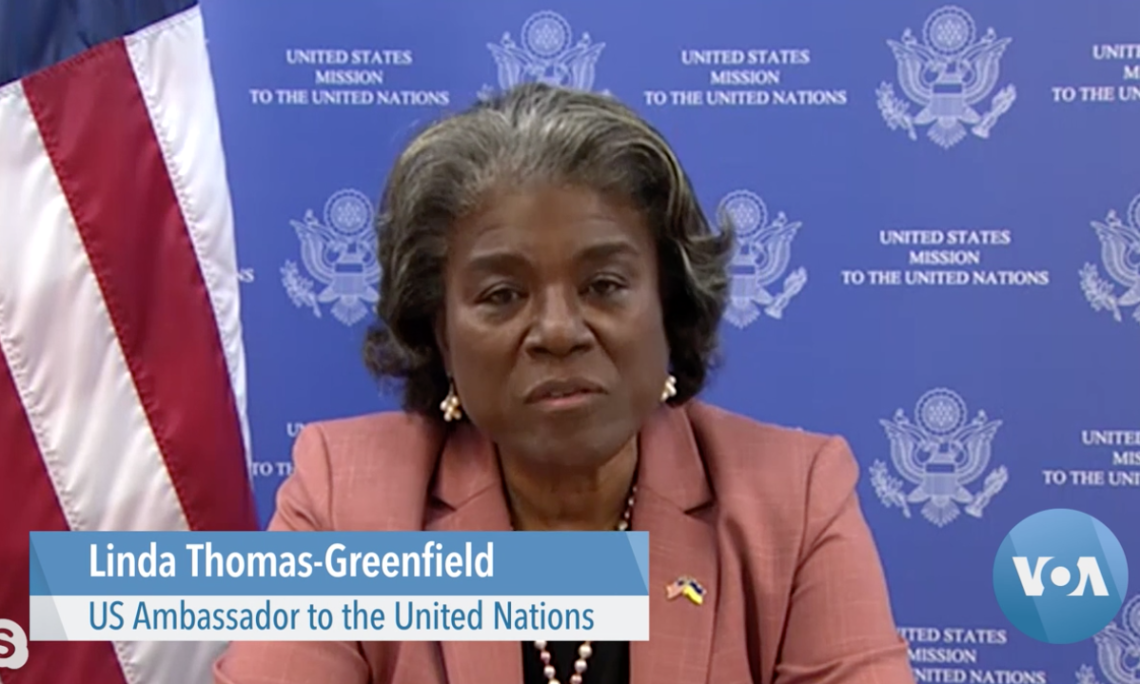 QUESTION: Ambassador Linda Thomas Greenfield, thank you so much for making time for a quick chat with us. Let’s get right to it. The outcome of the vote today, it passed comfortably, but the numbers were not as strong as the two earlier UNGA votes. So are you satisfied with the level of international unity? And what’s the message for Russia?

QUESTION: Ambassador, how do you answer the criticism that the move to suspend Russia was premature from the Human Rights Council? And that you should have waited for the results of the Commission of Inquiry on Ukraine?

AMBASSADOR THOMAS-GREENFIELD: If it were premature, we wouldn’t have won. We won today. And yes, there is a Commission of Inquiry, we want to see the results of that Commission of Inquiry. But do we have to sit and continue to watch the carnage? Watch the horror of Bucha happen over and over again, while Russia is sitting on the Human Rights Council? So the Commission of Inquiry can do its work. But Russia should not be sitting on the Human Rights Council, using the council as a propaganda arm to promote their narrative that somehow Ukraine is responsible its own destruction.

QUESTION: And just the technical point, is this suspension effective immediately?

AMBASSADOR THOMAS-GREENFIELD: It’s effective immediately, and it suspends Russia from the remainder of its three-year election to the Human Rights Council. And, again, I think it sends an extraordinarily strong statement.

QUESTION: Ambassador, are you optimistic that there will be real accountability for the atrocities committed in Ukraine?

AMBASSADOR THOMAS-GREENFIELD: I am absolutely optimistic and confident that there will be accountability for those atrocities. We are working with the Ukrainian prosecutor’s office, and others to collect the evidence. We see the evidence in the images every single day. This is being done right in front of our eyes. The evidence is there. And I do think that we will hold those responsible accountable.

QUESTION: What are the next steps here at the UN to keep the pressure and the isolation on Russia?

AMBASSADOR THOMAS-GREENFIELD: You know, we will continue to address issues related to Ukraine in the Council. As you know, the US will be president of the Council starting on May 1. We’re going to be looking at the issues of food security, and how that has impacted the world. This is not just about the impact in Ukraine. It does have global impact, and we want to start addressing some of the issues that other countries are facing as well. So that will be on our agenda in May. But we will continue to watch the situation as it evolves in Ukraine. And we will keep a drumbeat of focus on Ukraine in the Security Council.

QUESTION: Ambassador, you said the abstentions from China in the two previous General Assembly votes were pretty much a success given their closeness to Moscow. Today they voted against suspending Russia. Are you concerned that China is shifting closer to Moscow?

AMBASSADOR THOMAS-GREENFIELD: It’s clear that China is shifting closer to Moscow, so I was not surprised by their no vote. They have made a decision that they want to side with the aggressor in this conflict and you have to ask them to explain what their motivation is for this.

QUESTION: You just came back from a quick trip to Moldova and Romania, where you met with refugees from Ukraine. Could you just share with us a few of your impressions from your trip?

AMBASSADOR THOMAS-GREENFIELD: You know, it was extraordinarily emotional, because we were talking to families, all women and children and elderly, who had left their lives behind. And one of the things I came away from with all of this, is that we see the images of the blown up and destroyed buildings. But what I saw in Moldova and Romania were destroyed lives, and broken lives and broken homes. So that was extraordinarily emotional for me. I talked to women who were there with their children. One woman was there with her eight-year-old, and she wanted to find work, but she couldn’t because she was there alone with her child. And she didn’t know how she was going to work and not have childcare. I talked to another woman with a 15-year-old son, and he was looking forward to going back to school. And he was sitting next to his mom looking really broken and sad. So I got to experience in real time, the impact of this war on people’s lives. And that was something that was extraordinarily emotional for me. I’ve done refugee and humanitarian work most of my career, it is never easy to hear people’s sorrow, to hear their stories of sadness and what they have experienced then, it felt the same way to me this weekend, as it felt when I visited my first refugee camps in 1990.

QUESTION:  I can imagine. Ambassador before I let you go, there’s another vote today, a historic one. This time in Washington. Judge Ketanji Brown Jackson is set to be confirmed to the Supreme Court. Your thoughts?

AMBASSADOR THOMAS-GREENFIELD: I’m emotional about that as well. I’m proud. It’s taken too long for this for this to happen. But it’s a historic moment. And it’s one that I am so proud to be here to witness, and I look forward to what she will be able to accomplish on the Court. What she represents on that Court, and I hope to one day be able to see her in person and congratulate her for what she has achieved.

QUESTION: Ambassador Linda Thomas Greenfield, thank you so much for your time today.