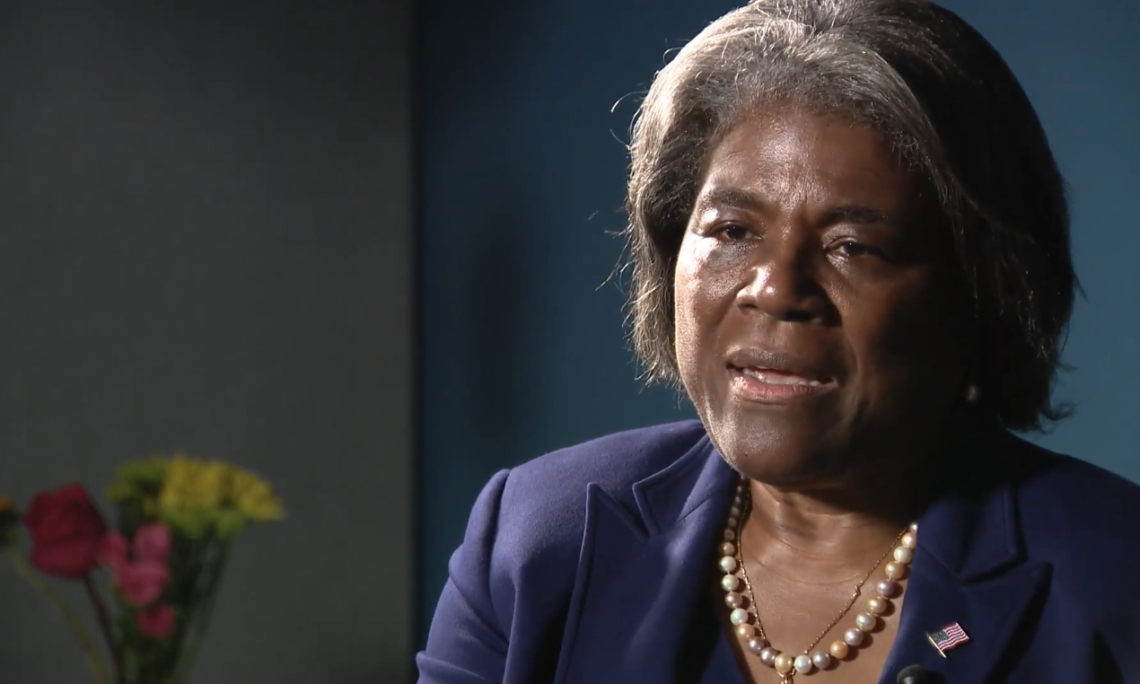 QUESTION:  U.S. Ambassador to the United Nations Linda Thomas-Greenfield is in Chicago today to deliver a message to the Midwest that while it’s easy to get lost in our own little worlds, it’s important to think globally.

AMBASSADOR LINDA THOMAS-GREENFIELD:  The bottom line is this: We’re all in this together.

QUESTION:  Ambassador Linda Thomas-Greenfield delivered an address about the world hunger crisis to the Chicago Council on Global Affairs, and sat with WGN News —

AMBASSADOR THOMAS-GREENFIELD:  Today on the farm, as I was picking little peppers and vegetables and  —

QUESTION:  — for an exclusive interview.

Prior to the pandemic there were something like 650 million people dealing with food insecurity.  That number skyrocketed during the pandemic. To me, it seems like more of an issue of priorities than resources. What is it you want to tell people about how we can solve this problem?

AMBASSADOR THOMAS-GREENFIELD:  It is an issue of priority. First and foremost, COVID. COVID impacted the supply chain, and that has raised our prices for just ordinary foodstuffs significantly. Secondly, climate. The impact of climate on food insecurity is a global issue. Add to that conflict.

QUESTION:  And hunger can lead to conflict, right? I know you’ve quoted Ralph Bunche, the great UN leader and civil rights leader who said: there is no peace without bread and rice.

AMBASSADOR THOMAS-GREENFIELD:  There is no peace without bread and rice, and we see that again every single day. I’ll tell you a very quick story. I lived and worked in Liberia in the 1970s, and Liberia was a relatively stable country until they had rice riots in 1979 that led to, eventually, a coup d’état and the country being in conflict for more than 14 years. So without rice, people cannot live and it does lead to conflict.

QUESTION:  International conflict is the question currently confounding the UN. As a Permanent Member of the UN Security Council, Russia retains the power to veto resolutions, and is able to block UN action on the war.

What would you say to those of us who watch the UN from afar and might say it’s not a perfect institution, it’s what we have, but sometimes it seems ineffective?

AMBASSADOR THOMAS-GREENFIELD:  I will agree that it is not a perfect institution, but it is what we have. It is what we have today to deal with global conflict and peace and security issues. And we’re working every day to reform it.

PRESIDENT TRUMP:  My administration has accomplished more than —

As far as how you approach your job and your style of diplomacy, I think one way you could describe it is the diplomacy of kindness. Is that accurate?

AMBASSADOR THOMAS-GREENFIELD:  I think it’s accurate. I think most people think when you’re doing diplomacy, you have to do diplomacy with a big stick. I think you can be much more gentler to get what you need.

QUESTION:  And I once heard you say that the most important weapon you have in your arsenal is a smile.

QUESTION:  What do you mean by that?

AMBASSADOR THOMAS-GREENFIELD:  It’s like, let’s roll up our sleeves and get the job done. If you look at the world as a huge failure, why get up in the morning?

QUESTION:  And Ambassador Thomas-Greenfield says that whether it’s COVID, conflict, or climate, no single nation can address the problems that affect the entire world. Reporting in downtown Chicago, Mike Lowe, WGN News.