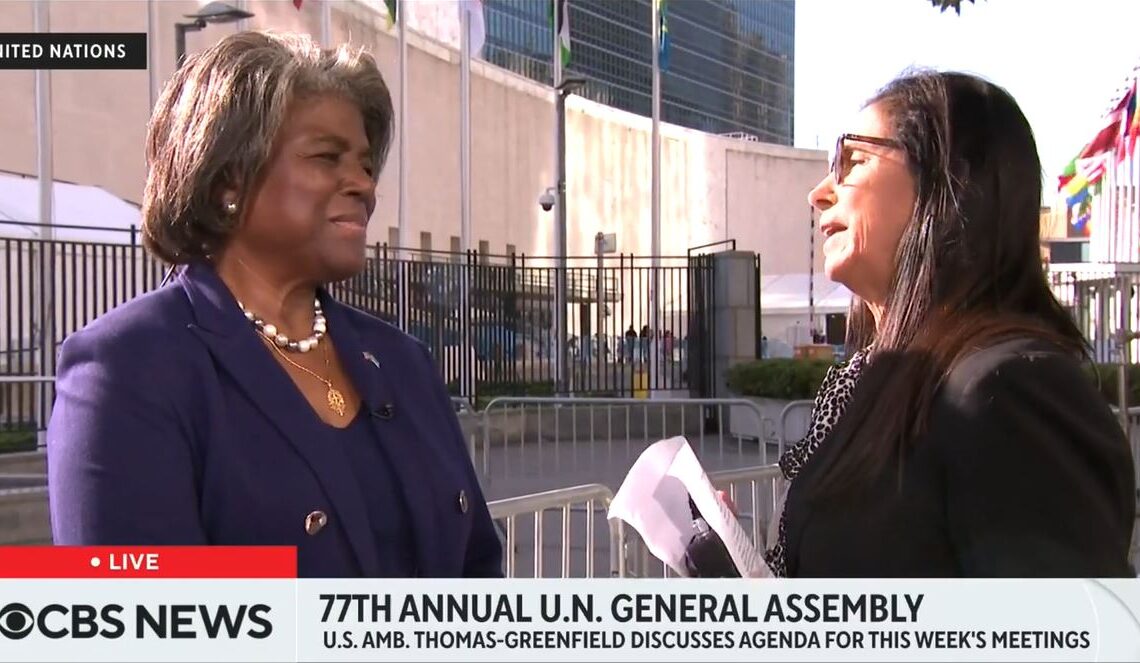 QUESTION: We’re here with Ambassador Linda Thomas Greenfield, a U.S., Biden Administration Cabinet Member, Ambassador Greenfield, thank you for being here. My question I want to start with is Ukraine, then Russia.

QUESTION: There’s a Security Council meeting, there have been more shellings of another nuclear plant in Ukraine. It’s getting – seems to be getting worse. What do you think can be done this week?

AMBASSADOR LINDA THOMAS-GREENFIELD: Well, first and foremost, we are going to continue to do what we have been doing over the course of the past six months. We are going to condemn Russia. We’re going to isolate Russia. It will not be business as usual for the Russians here in New York for the 77th UNGA. We will have a meeting on Thursday. Secretary Blinken will be sitting in the U.S. chair. Lavrov will be sitting in the Russian chair and he will hear for the first time, in person, from members of the Security Council, our concerns about what they are doing in Ukraine. He will hear the condemnation, and he will hear calls for Russia to pull their troops out of Ukraine and end this unprovoked war.

QUESTION: And China has expressed some reservations, we understand. So turning to China, the President spoke to 60 Minutes and said the U.S. would defend Taiwan. Where does that put you in a position here at the United Nations in terms of the angry Beijing reaction?

AMBASSADOR THOMAS-GREENFIELD: We will continue to engage with the Chinese here in the Security Council. But what Beijing should understand from the President’s statement, we’ve not had a change of policy. We still support the One China policy, but we also have been clear in terms of our defense of Taiwan’s right to exist, and the President was clear on 60 Minutes in his statement on Sunday.

QUESTION: And do you think there’s been a bit of a shift in the China position with regard to Ukraine? There seems to be when we hear it from Xi Jinping, the President. Do you see it here?

AMBASSADOR THOMAS-GREENFIELD: We have seen it here. I think China has been put in an untenable position aligning itself with Russia in this unprovoked war. China has always stood strong for sovereignty of nations, integrity of borders. This goes against what they have said that they believe in. So, I was happy to hear that President Xi raised his concerns to President Putin, and hopefully this will lead to China being more proactive and condemning Russia here in New York.

QUESTION: Oh, that’s interesting. Now turning once again to Iran. The Iran nuclear deal seems a bit stalled. The President of Iran, Raisi, spoke to 60 Minutes, and basically said that Iran doesn’t trust the United States with regard to these negotiations. Where do you think these talks are going? Is there any opportunity during this General Assembly session to have some talks about it?

AMBASSADOR THOMAS-GREENFIELD: We have put a deal on the table for the Iranians. The EU put that deal forward. The Iranians can accept that deal, and that will lead us to an agreement. The President has committed to continuing diplomacy, but he has also been clear that we will do everything possible to prevent Iran from gaining access to a nuclear weapon. So, there are no plans for any discussions here in New York that I’m aware of. But I know that we continue with the diplomacy, as long as the Iranians are willing to continue with diplomacy, and basically our message to them is accept the deal.

QUESTION: Alright, and your flagship issue the food security. Tell us about what will happen later today at the Food Security Summit.

AMBASSADOR THOMAS-GREENFIELD: President Blinken will be co-chairing the Food Security Summit with the EU, with the African Union, as well as with the country of Spain. A large number of countries have requested to engage on this discussion because we see this as a global issue. It’s an issue we have to come together to find a solution to. It’s been exacerbated by Russia’s war in Ukraine and we need to work with the global south and the rest of the world to help them address their food security issues. And that’s what that meeting will be about.

QUESTION: And one last nice note. You may be meeting with the First Lady of Ukraine at an event – I mean, not one-on-one – but at the event at the Metropolitan Opera. What do you think the significance of her coming is?

AMBASSADOR THOMAS-GREENFIELD: Well, I actually had the opportunity to meet with her when she met with the First Lady in Washington during her last trip. She was an extraordinarily impressive voice for her country, and I look forward to engaging with her tonight.