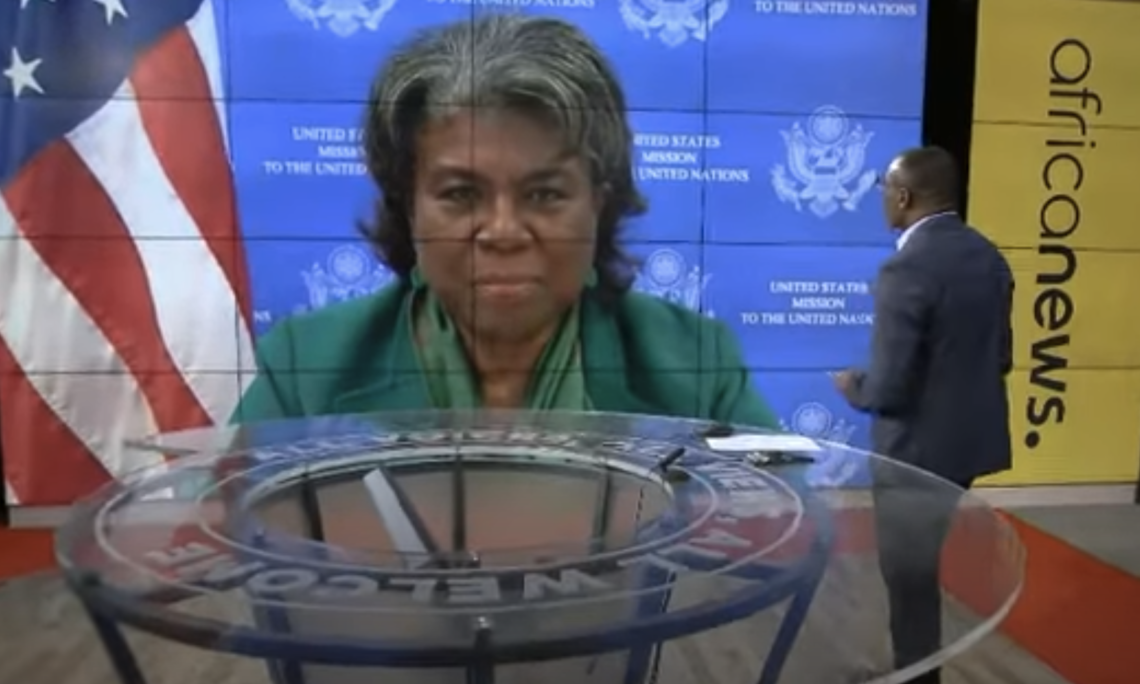 QUESTION:  Welcome to this special interview on AfricaNews. So the war in Ukraine is happening far from Africa, but its consequences are being felt on the continent. From skyrocketing fuel prices to difficulties importing food, countries in Africa feel caught up in a conflict they thought they had nothing to do with. To hear more about the ramifications of the Ukraine war for African countries, I’m joined by the U.S. Representative to the UN Ambassador Linda Thomas-Greenfield. Ambassador Greenfield, thank you very much for your time. Are you concerned that soaring food prices in Africa could drive social unrest or other other upheaval?

AMBASSADOR LINDA THOMAS-GREENFIELD:  Thank you, Ronald, and it’s really great to be here with you. We know that the impact of this war of aggression that the Russians initiated in Ukraine will have an impact on the world. Ukraine has been one of the major exporters of wheat to Africa for example. I think the figures I have is about $2.4 billion in 2021 of trade between Ukraine and Africa. But it is the war that has led to this, and this is why Africans need to be part of the solution to bringing this unconscionable war to an end. The impact is not just being felt in Africa. We’re seeing oil prices increase in the United States. We’re seeing food prices increase in the United States. It is because of Russia’s aggression that this is happening.

QUESTION:  Ambassador Greenfield, this is a major international event. When things like this happen, African countries tend to be on the periphery. We heard last week the South African President, Cyril Ramaphosa, saying he had been approached to try and mediate a way out of this crisis. What role can African countries do to bring this war to an end, for peace to prevail in Ukraine?

AMBASSADOR THOMAS-GREENFIELD:  The voice of every leader, every country, calling on the the Russians to end this war, I think, is is important. No voice is too small. No president is unimportant in this effort. And this is why in New York, in the General Assembly, the African vote is so important. So that we can say to the Russians they have no allies in this war of aggression against Ukraine. That we all stand with the Ukrainian people with this attack on the integrity of their borders, this attack on their sovereignty and their independence, this humanitarian crisis that is being created by the Russian actions in Ukraine. So every country is being impacted by this, and every country ought to stand against this aggression.

QUESTION:  Are you engaging African ambassadors? Are you in touch with the African Union?

AMBASSADOR THOMAS-GREENFIELD:  I am working with African ambassadors on a daily basis. As you know, there are three African elected members of the Security Council, the A3, Ghana, Kenya and Gabon. I engage with them on on these issues regularly. And I meet with and engage with other African permanent representatives to encourage them to speak out on this issue. The head of the AU was in Washington last week, Mr. Faki, and he met with Secretary Blinken and met with others in Washington. And certainly, a number of issues were on the agenda on how we can partner with Africa on a broad range of issues, but Ukraine was certainly one of those areas where we need African engagement, we need African partnership.

QUESTION:  Ambassador Greenfield, the global economy is emerging from the pandemic. And now you have rising fuel prices that threaten to scuttle growth. I know that this isn’t primarily your topic, but what is your government going to bring down oil prices?

AMBASSADOR THOMAS-GREENFIELD:  We have done a number of things to mitigate the impact of this war and the sanctions that have been imposed on Russia – to mitigate the impact of that on other countries, including our own where we are also seeing oil prices and gas prices skyrocket. The idea is to look for other sources of oil to build up and promote other countries who are oil producers. There are a large number of countries who are oil producers on the continent of Africa. How can we use those resources in a in a more efficient way that will provide support across, not just in Africa, but across the world? Those are all issues that we’re trying to address as we address the impact of the war and helping countries come out of the COVID pandemic.

QUESTION:  Ambassador Linda Thomas-Greenfield, the U.S. representative to the United Nations, thank you very much for your time.

AMBASSADOR THOMAS-GREENFIELD:  Thank you very much, Ronald. And I was delighted to be here with you.