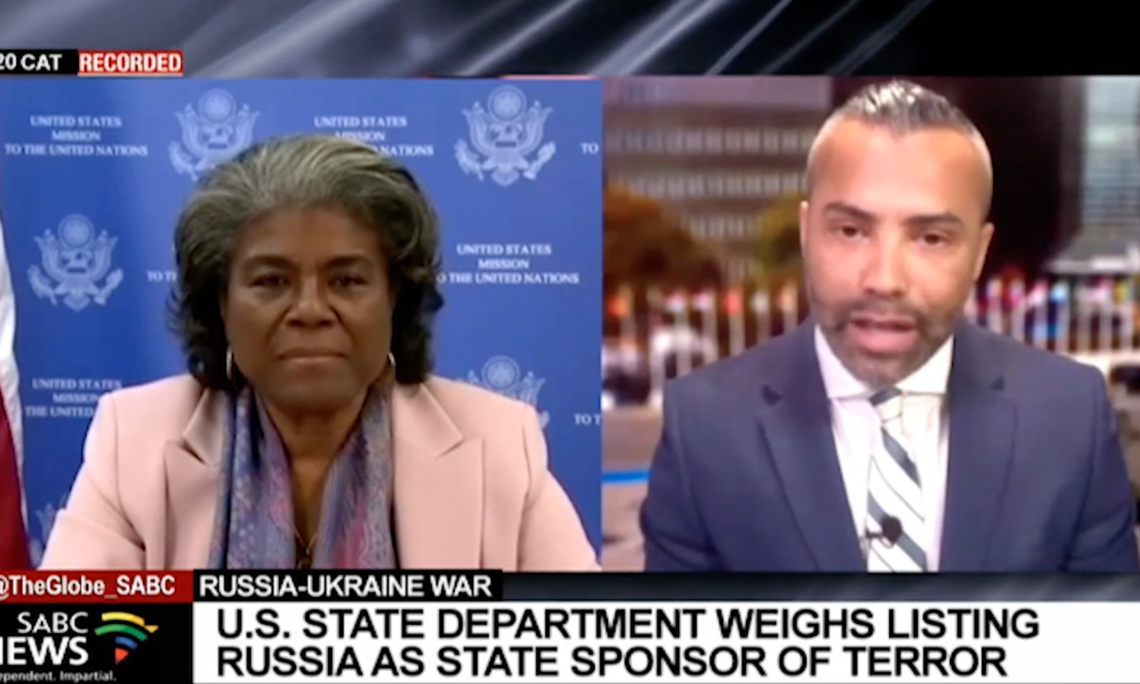 AMBASSADOR LINDA THOMAS-GREENFIELD: Thank you. Delighted to be with you.

QUESTION: We are a few days shy, Ambassador, of the two month mark in the war in Ukraine, and three major narratives emerged today: One is that we are now close to 5 million refugees, that Russia has started a fresh offensive in the Donbass region, and that the United States State Department is looking at designating Russia as a state sponsor of terror. What would such a designation achieve?

AMBASSADOR THOMAS-GREENFIELD: Well, certainly we have already taken actions against the Russians in terms of sanctions, in terms of designating many of the oligarchs, including members of Putin’s family and some members of the government. Those actions will certainly increase, should that state sponsorship go through, and it’s the State Department that’s leading that process. But we have already put tremendous pressure on the Russians for the actions that they have taken in Ukraine.

It’s actually hard for me to believe that it’s only been five* weeks that we have been involved in this crisis. It’s 5 million refugees, but it’s 10 million plus – almost 11 million people –who’ve been impacted by this war. We’ve seen the devastation in Ukraine, the destroyed buildings, the destroyed infrastructure, but worse than that is the destroyed lives that we have watched. I traveled to Moldova and Romania a couple weeks ago and met with women and children who had escaped, and the impact on their everyday existence is just remarkable. The fact that they are able to still survive in spite of Russia’s relentless attack on their country.

QUESTION: Ambassador, what we have from the UN perspective to date is a vetoed Security Council resolution that demanded Russia’s withdrawal, two General Assembly resolutions on the political and humanitarian tracks that one can argue isolated Russia but made little difference on the ground, a third GA resolution that saw Russia suspended from its seat on the Human Rights Council, and then, of course, an ICJ ruling right at the beginning that ordered Russia’s troops out of Ukraine – efforts that have done little to change the calculus on the ground. Would you agree therefore, Ambassador, that the global peace and security architecture is no longer fit for purpose, particularly when dealing with countries that hold veto power?

AMBASSADOR THOMAS-GREENFIELD: We are continuing to put pressure on Russia. Russia is feeling the isolation here at the Security Council. We’re seeing them change their strategies here in the Council. So the international system is working. What we can’t account for is an authoritarian leader who is not prepared to respond to the international community and the impact that is having on the Russian economy and the Russian people. So we will keep the pressure on. We will keep pressing the Russians to adhere to the international community, and we will keep supporting the Ukrainian people. And as I said, the isolation is being felt. We had three successful General Assembly resolutions against the Russians, including to suspend them from the Human Rights Council. This is a huge, huge success. And I can tell you, the Russians here in New York are feeling the discomfort, and I know that they’re feeling that discomfort in Moscow as well.

QUESTION: Ambassador, we’ve heard so many explanations as to what caused this war. That this was about Ukraine seeking to join NATO with the European Union. We’ve heard that this is about genocide against Russian speaking people in the Donbass region and the lack of implementation of the Minsk agreements. We’ve heard that this is about President Putin’s desire to rebuild the Russian Empire of old. We’ve also heard that this is due to the fact that the United States and European partners did not heed warnings over the decades that an eastward expansion of NATO would be a provocation. So I want to hear from you as to what you believe the main causes of where we find ourselves today are.

AMBASSADOR THOMAS-GREENFIELD: We’re here today because of Russian aggression. We’re here today because Russia attacked its neighbors and decided it would not listen to the international community. President Biden met with Putin. He had several phone calls with Putin. Secretary Blinken met with his counterpart, the foreign minister, Foreign Minister Lavrov. We actually sat down with the Russians and tried to work with them to find the diplomatic way forward. They were not interested. They were not willing to listen.

Ukraine is not a member of NATO. But we do believe in the rights of a country to choose their partners. We do believe in the open door policy of NATO. But that was not enough for the Russians to carry out this aggression against the Ukrainians. And, in fact, what they have done, they have succeeded in unifying – they’ve unified NATO, they’ve unified the Europeans, and they have encouraged the Ukrainians to seek NATO membership when, early in this process, only about 30 percent of Ukrainians actually thought NATO membership was important to them. Now that number has more than doubled.

QUESTION: South Africa’s President Cyril Ramaphosa told the South African Parliament in March the war could have been avoided if NATO had heeded the warnings from amongst its own leaders and officials over the years that it’s easterly expansion would lead to greater, not less, instability in the region. Is President Ramaphosa wrong?

AMBASSADOR THOMAS-GREENFIELD: I can’t speak for President Ramaphosa. I can only speak for the United States and the positions that we have taken. And we made every effort to negotiate with the Russians, to understand their security issues, and try to address their security issues at the negotiating table. And you will know that we were in a Security Council meeting when this attack happened. This attack happened a day before Secretary Blinken was to have another meeting with Lavrov to discuss Russian concerns. They were not interested in diplomacy. They were only interested in their own ambitions and their own aggressions. And they have to understand that an attack like the attack that they have taken against Ukraine would get a response. And we made that clear to President Putin very early in this, that we would put sanctions like they have never seen before. And we’ve done that, and we’ve done it in unity with our European partners. And we will continue to ramp up that pressure.

We do realize that this war is having an impact in the rest of the world. And we want to hear African voices. African voices matter in this. African countries need to express their views on this, and we need to make sure that they understand that this is against the core principles of the UN Charter. It is against the sovereignty and the integrity of a country’s border, and every African head of state should be worried about what this means globally.

QUESTION: So let me push you on that, right? The differences between Pretoria and Washington’s position on Ukraine have been well ventilated. In that context, what message did President Biden deliver to his South African counterpart? They spoke on April 8th. And what would you like to see from the South African president in particular?

AMBASSADOR THOMAS-GREENFIELD: We had a very, very productive conversation with President Ramaphosa. We wanted to hear his positions, and we shared with him our concerns about what is happening in Ukraine and how we can address this as partners around the globe. And so the results of those discussions will hopefully lead to some reassessment of the South African position on Ukraine, in particular a clear understanding of what this means for Ukraine and what it means for the globe.

But again, President Ramaphosa will have to explain South Africa’s position and why South Africa has taken the position that it has taken, but we have been prepared to listen to South Africa, listen to other partners from the African continent to help them understand our position. And in particular, this is not a war between Russia and the United States. This is –

QUESTION: Final question for you, Ambassador, and then I have to let you go. What does accountability look like? You know, there’s a Commission of Inquiry appointed by the Human Rights Council in Geneva. We talk about nuclear weapons, chemical weapons, that kind of stuff. What does the future look like, here, and what’s the trajectory towards peace?

AMBASSADOR THOMAS-GREENFIELD: Well, it’s clear that what the Russians have done in Ukraine constitute war crimes, and they will be held accountable. What that looks like in the end will depend on the institutions that will be working on that. But we are working with the Ukrainian prosecutor’s office, to help them to collect evidence and to have that evidence ready to present to the institutions that will bring Russia’s crimes before the international community. And what we want to see in the end is peace. We want Russian troops out of Ukraine, and we want to work with the Ukrainian people to help them to start the process of rebuilding their nation and rebuilding their lives.

QUESTION: Ambassador Thomas-Greenfield, thank you for your time today.

QUESTION: Linda Thomas Greenfield is U.S. Ambassador to the United Nations and a member of President Joe Biden’s cabinet.