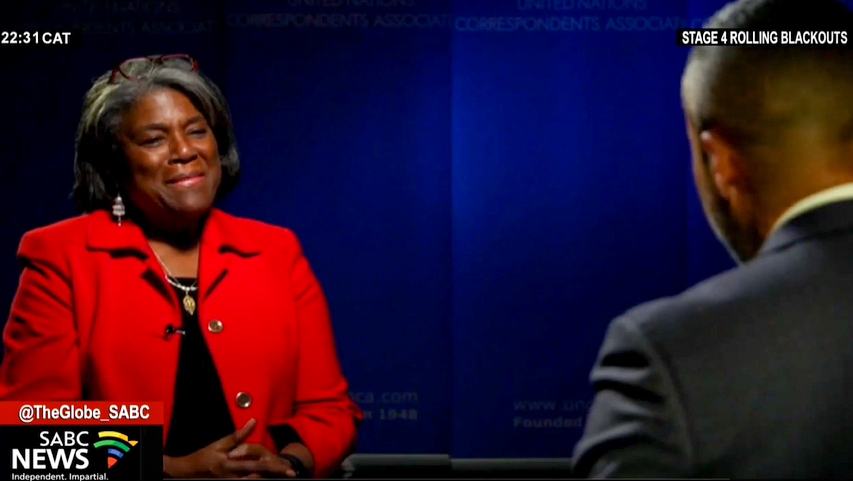 QUESTION: Now, you embark on a three-nation visit to Africa later this week, including stops in Ghana, Mozambique, and Kenya, in what your office describes as an effort to affirm and strengthen partnerships with key current and former UN Security Council members.

QUESTION: This follows soon after the U.S.-Africa Leaders Summit this past December. How do visits of this nature, Ambassador, inform the greater U.S. strategy towards Africa, and what is the underlying message you seek to communicate?

AMBASSADOR THOMAS-GREENFIELD: Well, first of all, it’s part of a strategy that I have had since joining our mission here in New York, and that is to visit newly elected members of the Security Council. So, this is not my first trip to Africa. I think it may be my third or fourth since joining the Security Council two years ago on the 24th of February. And part of the strategy is, one, to engage Security Council members – to engage them on what their priorities are so we have a clear understanding as they sit on the Council what is important to them, but also to share with them our priorities.

QUESTION: The preview of this was the talks about advancing, as you say, shared priorities, among them regional security issues with growing concern about the terrorist threats posed by groups like al-Shabaab and ISIS-affiliated groups that have now infiltrated far south in the continent, including into the SADC region – most notably, Ambassador, Cabo Delgado in Mozambique. What do you see as some of the key issues the U.S. seeks to help in addressing these issues in the region, particularly given the developmental complexities that that region faces?

AMBASSADOR THOMAS-GREENFIELD: Well, first and foremost, it is to hear out the concerns these countries have and how they would like to lead on addressing the key issues of security in their region and how we can partner with them to help them to address those issues. And it’s not just security. It is development. It is humanitarian. It is governance.

So, we will have a broad discussion in Mozambique and in Ghana and in Kenya, as I’ve done previously, on how the U.S. can partner with Africa to address those issues moving forward so that Africans can have a better future for their children.

QUESTION: You’ll also focus, Ambassador, on supporting what you call African resilience and recovery and mitigating the effects of climate change. A large part of the discussion with the developed north is around the just transition, right? Particularly in helping these developmental states shift away from their heavy reliance and dependency on fossil fuels. Oxfam writes that 70 percent of climate finance from rich countries to developing states came in the form of loans.

How concerned is the United States about the growing pushback we are seeing in some developing countries that are being pointed in one direction with the types of financing that exacerbates already high debt burdens in those countries?

AMBASSADOR THOMAS-GREENFIELD: Well, you certainly missed saying one point, and a lot of that debt burden has been placed on African countries by China. We don’t provide debt to Africans to deal with climate change. In the case of Mozambique, we’ve given them $25 million recently to address the issues in the Cabo Delgado region. I am going to be visiting an area looking at how we can address – help them address climate change as well.

So yes, the debt burden is significant, and it means these countries end up in a worse place than when they started, and we cannot promote a system that addresses broad climate issues that also lead to burdening these countries with additional debt on their shoulders.

So, again, I will be addressing those issues in both Mozambique and as well in Kenya.

QUESTION: The devastating impacts of the war in Ukraine, particularly as it relates to food security in Africa, is also going to be part of your focus on this trip. There has been huge diplomatic pressure, Ambassador, placed or exerted on Russia at the United Nations, but it’s not necessarily having an impact on the ground. This is a war we can all agree must end, right? And I wonder what you see the role of African countries in getting us closer to that reality given the growing stalemate we are seeing on the ground.

AMBASSADOR THOMAS-GREENFIELD: Well, Africa is key to pressuring Russia because we need to send a strong, unified message to Russia that what they are doing in Ukraine is unacceptable, but even more so it’s impacting all of us, it’s impacting Africa. We’re seeing food prices increase. When I was in Ghana last year, the price of fertilizer was causing huge havoc in the market. Supply chains have been impacted by this war. And so African voices have to be part of a unified message that we send to Russia that they must end this war, they must withdraw their troops from Ukraine, and they must honor the UN Charter that they signed on to just like the rest of us.

QUESTION: South Africa’s International Relations Minister Naledi Pandor hosted Russian Foreign Minister Sergey Lavrov in Pretoria just today and said South Africa desires a diplomatic resolution to the conflict with the need for negotiations that everyone works towards. What do you make, Ambassador, of South Africa’s continued friendly relations with Moscow and the Minister’s position that continues to espouse Pretoria’s so-called neutrality?

AMBASSADOR THOMAS-GREENFIELD: Look, South Africa has the right to determine what their foreign policy messages will be. So, I’m not going to question or criticize her message, but what I will say is that we all need to hold Russia accountable. We’re not opposed to a diplomatic solution. The President tried to pursue a diplomatic approach with Putin before this war started. It didn’t work. And right now, the only answer to ending this war is for Russia to stop fighting, to take their troops out of Ukraine and end this unprovoked war.

If Ukraine stops fighting – and I’ll quote Secretary Blinken on this – Ukraine ends, because Russia will continue to fight until they get a message from every country around the world that what they’re doing is unacceptable. What Lavrov is doing is going around the world nitpicking to find countries that will deliver messages of support, and there are very, very few, and I –

QUESTION: So, neutrality is not a problem for the United States?

AMBASSADOR THOMAS-GREENFIELD: Neutrality – you cannot be neutral on the UN Charter. This is not about being neutral on a war between countries. We’re not asking African countries to take sides. We’re asking them to side with right, and right is to support the UN Charter, to support the territorial integrity of a small country. Because what is happening to Ukraine could happen to any country in the world, and they wouldn’t want us to stand on the sidelines and say, “We’re being neutral.”

QUESTION: A couple more questions before we let you go, Ambassador. Unlike under the Trump administration, we are seeing a number of senior U.S. officials – including yourself, Secretary Blinken last year, Janet Yellen, the Treasury Secretary – in the region, going to Africa. There is always a healthy amount of skepticism from African states, particularly given the competitive nature of Washington’s relationship with China and Russia. Is the United States engaged in a strategic battle for greater influence in Africa?

AMBASSADOR THOMAS-GREENFIELD: We have been engaged on the African continent since the beginning. We were one of the first countries to recognize Ghana’s independence in 1957. I’m not new to the African continent. I’ve spent the majority of my career on the continent of Africa. As I mentioned, this is not my first trip; this is my third or fourth trip since taking on this role.

We have a strong partnership with Africa. We’re not telling Africa, African countries they can’t be friends with other countries, they can’t have relations with other countries. What we’re about is developing our own partnership, a partnership that is respectful of the African continent and of the people of Africa. And I always say, and I have to say again, we’re the only country in the world that has a diaspora from every single country on the continent of Africa – and that’s a powerful, powerful tool.

QUESTION: Senior U.S. leaders, including up to President Biden, have spoken with greater regularity about the need for Security Council reform, including the permanent representation of African states. How is the United States actually using its diplomatic muscle here at the United Nations to make that a reality?

QUESTION: Are you moving that forward, Ambassador?

AMBASSADOR THOMAS-GREENFIELD: I am moving that forward. I am on a listening tour. I met with the G4 last week, I am meeting with the C10 – the C10 are the African countries – to hear them out. We’re not walking in the door with some precooked idea of what we want. We’re listening to other countries about what they would like to see, and then we’ll come back to them with proposals that we have, but proposals that include their ideas as well.

QUESTION: Final question. President Biden announced at the end of the U.S.-Africa Leaders Summit that he planned to visit Sub-Saharan Africa in 2023. It’s 2023. Is that still happening? And if so, any clues on where he’ll go? Will he go to South Africa given President Ramaphosa’s visit to the White House last September?

AMBASSADOR THOMAS-GREENFIELD: I can’t preview the President’s travel, but I heard him make the commitment. It’s January 23, so we’re only 23 days into 2023. I do expect that the President will honor his commitment.

QUESTION: Ambassador Linda Thomas-Greenfield, safe travels to Ghana, Mozambique, and Kenya later this week, and as always, thank you for speaking with us.