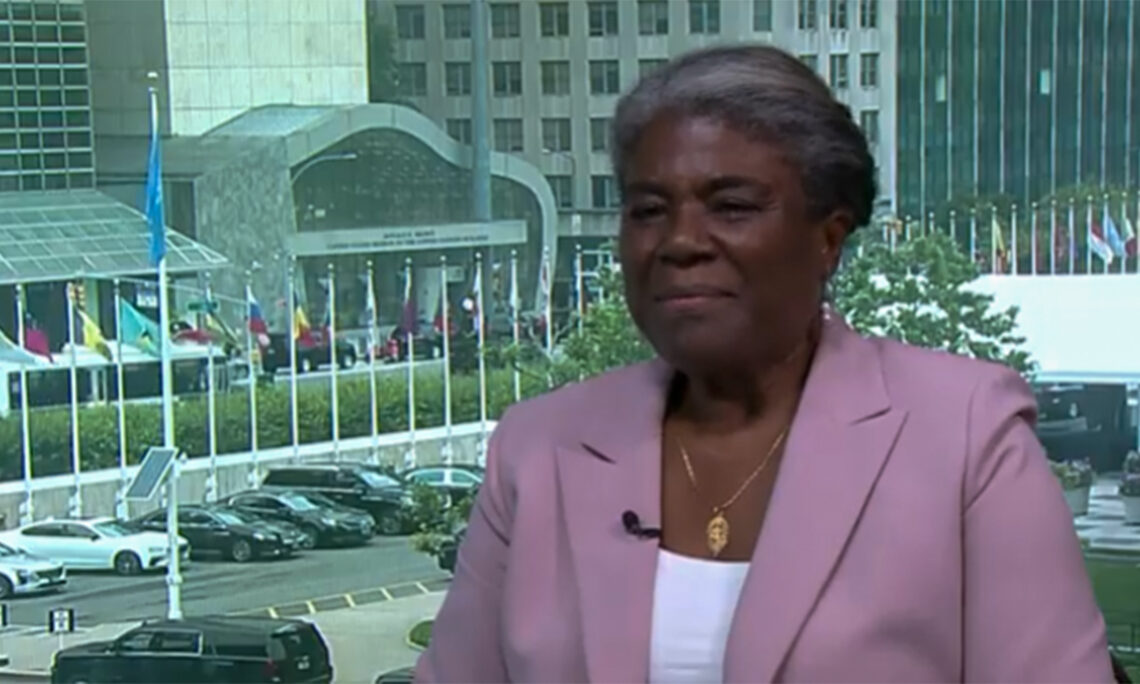 AMBASSADOR LINDA THOMAS-GREENFIELD:  Thank you so much, I am delighted to be here.

QUESTION: We are honored. I would like to start by the world food security. As you know, we had an agreement signed in Istanbul under the sponsorship of the United Nations and Türkiye between Ukraine and Russia, but lately we had a bombing and shelling of one of the biggest ports on the Black Sea, Odesa, and the Russians have admitted actually bombing that port saying they were targeting –

AMBASSADOR LINDA THOMAS-GREENFIELD:  They had no choice but to admit it. They did it.

QUESTION: Yes, and they said they were targeting military installations over there. Now, the Ukrainians are busy fixing the port to enable them to be able to export the grains they have. In absence, for whatever reasons, of us succeeding to get the ports moving and exporting grains to the millions of people hungry around the world, what is plan B exactly?

AMBASSADOR LINDA THOMAS-GREENFIELD:  Well, I can tell you that we put plan B in place before this deal was ever signed. As you know, we have been working with the Ukrainians and with our European partners to provide facilities, a corridor to move Ukrainian wheat over land, by rail, out to other countries across the border.

And while this cannot address the massive amounts of wheat that the Ukrainians have, they have about 20 million tons sitting, waiting to be moved. We have actually been successful in moving some dozens of tons across the – millions, I’m sorry – a couple of million tons across the land borders, and we will be working continuously to ramp up that corridor.

QUESTION: And in case, if this plan is not implemented as agreed in Istanbul, would you be using waterways and trains?

AMBASSADOR LINDA THOMAS-GREENFIELD:  Exactly, the European Union has been working to establish this corridor, and we are continuing to work with them to ramp up the possibilities. But I am very pleased that the Ukrainians continue to support the agreement that was signed with the Russians because they know the best way to get the millions of tons that are sitting in Ukraine out is through the Black Sea.

QUESTION: Can you talk to us on the historic visit by President Biden to the Middle East region, visiting Israel, Palestine, and Saudi Arabia, and attending the summit in Jeddah with the presence of the Egyptians, the Jordanians, and the Iraqis? Can you say he succeeded in recalibrating the relations with the Middle Eastern countries, especially a country like Saudi Arabia?

AMBASSADOR LINDA THOMAS-GREENFIELD: Absolutely, the visit was a successful visit and we reaffirmed our relationship with countries in the region. We re-established our commitment, reaffirmed our commitment to Israel, but also worked with other countries in the region in terms of establishing connections with Israel, and as you know one of the announcements that came out of the visit was the airline connection between Jeddah – flights between Jeddah and Israel.

QUESTION: Yemen – the truce in Yemen is beleaguered by the Houthi’s violations. Now they are besieging a village called Khubzah and actually shelling and killing civilians. On Sunday, they shelled Taiz, where 11 children were killed or maimed. Everything they are doing really does not show their good intentions for peace or upholding the truce, the commitment towards Taiz, and opening the roads – until today, this has not been done. Now there is the latest report from the Sanctions Committee on the Taliban, al-Qaeda, and ISIL, and the Taliban saying that the Houthis are releasing al-Qaeda operators in their prisons, asking them in return to conduct terrorist attacks by proxy in favor of the Houthis.

What tools of pressure does the world or the international community have to force these people, to pressurize, incentivize them to sit down and speak peace?

AMBASSADOR LINDA THOMAS-GREENFIELD:  Well, thank you for that question, and the truce is very tenuous. It’s still holding and it has provided a bit of relief to the Yemeni people, and we are working to make that truce into a permanent ceasefire. Our Special Envoy, Ambassador Lenderking – on the ground, working around the clock to push the Houthis and the others to the negotiating table, and we will continue to work on those efforts.

Clearly, the Houthis have taken some actions that are not in the interest of peace, and we have to keep pressure on them and continue to work on behalf of the people of Yemen. As you know, I announced in Brussels $800 million for Syria, but I also made sure that I engaged with our counterparts on the situation in Yemen when I was there.

QUESTION: But their actions do not translate into a will to succeed and to move into a real political negotiated solution for this. The Hudaydah Agreement, for example, in Stockholm – nothing has been implemented by it. And until today, the commitment that the Houthis undertook hasn’t been implemented to open the roads to a besieged four million people.

AMBASSADOR LINDA THOMAS-GREENFIELD:  We have to keep the pressure on them because it is the Yemeni people who are suffering, and we have not given up and we will not give up on trying to find a way forward.

QUESTION: Iran and the JCPOA and the behavior of Iran in the region. In light of the failure to renew the U.S. membership of the JCPOA club, I could say. The Iranians have continued to enrich to a higher level uranium. This week, they announced there is no more need for monitoring cameras in the nuclear facilities of Iran and they should be taken away. What are the plans for this intransigence and provocative behavior?

AMBASSADOR LINDA THOMAS-GREENFIELD:  You know, our belief – and the President made this very clear at the beginning of the Administration – the only way to hold the Iranians accountable and to stop them from pursuing a nuclear weapon is through a return to the JCPOA, and we were committed to returning to the JCPOA. We have negotiated a deal, the deal is on the table. Now it’s up to the Iranians to take advantage of that deal, and there are some incentives for them to do that. They need to look at the deal and determine that it is in their interest to return to the JCPOA, and we will keep pressuring them to do that.

QUESTION: And what about their malicious activities in the region, in Yemen, in Lebanon, in Iraq, in Syria?

QUESTION: I would like to move to Libya. The United Nations and also all the Arab leaders who met in Jeddah in the presence of President Biden – they all call upon the foreign forces and mercenaries in Libya to leave Libya at the earliest opportunity, but is that really possible, feasible? Can we succeed in getting all the foreign fighters and mercenaries out of Libya? Because they are a hindrance to any settlement – peaceful settlement of the conflict.

AMBASSADOR LINDA THOMAS-GREENFIELD:  They absolutely are and they are contributing to the destabilization of this country, and we are pushing for foreign fighters and mercenaries to leave Libya. We all know who they are, they know who they are. I don’t need to name them here. They need to pack their bags and leave this country, so that we can finally bring Libya back into the community of nations.

QUESTION: But again, what pressure tools do we have to convince them and incentivize them to leave?

AMBASSADOR LINDA THOMAS-GREENFIELD:  Well, certainly in the Security Council, we have used our perch in the Council to call them out and to pressure them to leave. The Libyans themselves have insisted that they leave, and we have to continue that pressure.

QUESTION: Syria – this month, we saw a marathon of diplomatic activities and I’m sure you were right in the middle of it, and in the end we succeeded somehow to get a six-month extension until January, when we will have to vote on another resolution. And of course this came to the relief of more than four million people who were depending on the supplies and the humanitarian aid across the border. Has the UN process, by the way, for finding peace in Syria – and I mean by that, in Geneva – has it lost its usefulness, outlasted that?

AMBASSADOR LINDA THOMAS-GREENFIELD:  No, it has not. We have to continue those efforts to find peace in Syria, and the Special Envoy step-by-step process has been slow, but it’s slowly finding a path forward, and we just have to keep ramping up the pressure. But in the meantime, we have to provide assistance to the people of Syria. And you heard me say during my press avail after the initial failure of the resolution, my sadness and apology to the Syrian people that we were not able to achieve a 12-month resolution. And we were told that six months was better than nothing, but 12 months was needed to provide the minimum, and we will keep working toward that effort.

QUESTION: The State Department on March 15 said in a statement that the United States remains committed, I’m reading it, to facilitating negotiations between Lebanon and Israel to reach a decision on the delineation of the maritime boundary. Progress towards a resolution can only be reached through negotiations between the parties, that is what the State Department said. Can you fill us and our viewers in, where are we now in this process?

AMBASSADOR LINDA THOMAS-GREENFIELD:  I mean the process is continuing. I can’t give you the details of where they are, or the blow-by-blow negotiations that are taking place, but I think the statement speaks for itself, that we are committed to finding a solution and working with both sides to do that.

QUESTION: Ambassador Linda Thomas-Greenfield, United States Permanent Representative to the United Nations, we thank you for this opportunity and I know that you have a very heavy schedule so we appreciate you taking the time to talk to our viewers. Thank you so much.

AMBASSADOR LINDA THOMAS-GREENFIELD:  Thank you so much.