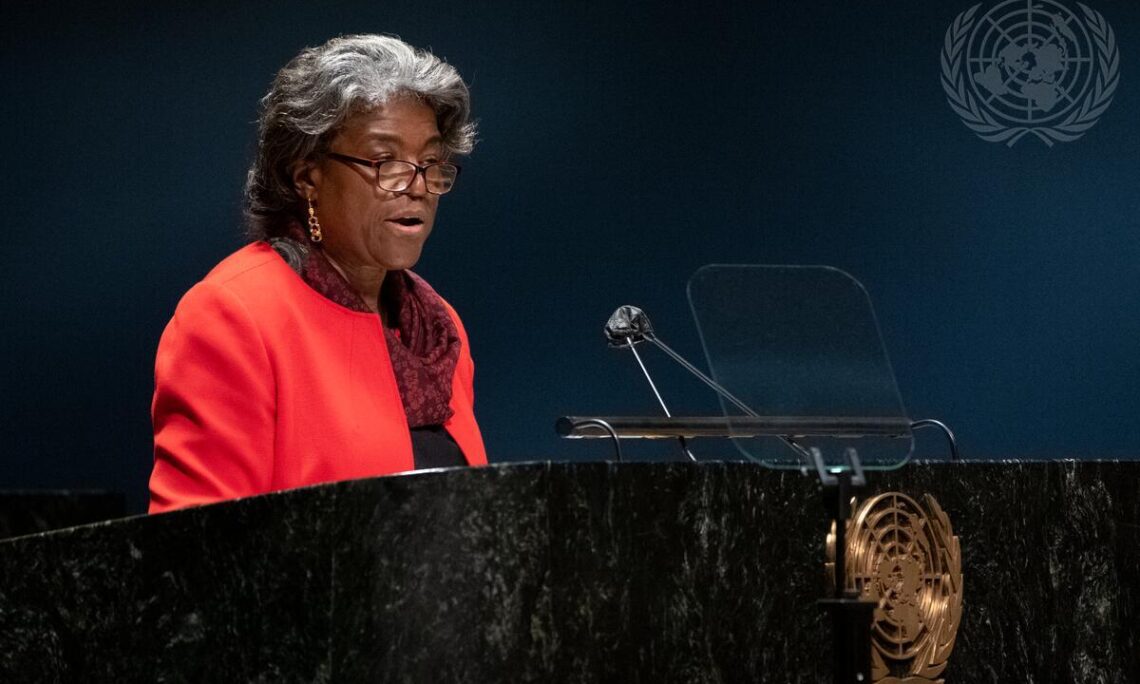 Member States of the United Nations, we stand at a crossroads in the history of this body. On Monday, President Putin announced that Russia would recognize as “independent states” the so-called DNR and LNR regions, part of the sovereign territory of Ukraine controlled by Russia’s proxies since 2014. He then ordered Russian military forces, under the guise of so-called “peacekeepers,” to deploy to these regions.

In the hours that followed, Secretary-General Guterres said this was “a violation of the territorial integrity and sovereignty of Ukraine and inconsistent with the principles of the Charter of the United Nations.” He reaffirmed that to us in his remarks today. In an emergency meeting Monday night, all but one member of the Security Council called for dialogue and diplomacy, which can only happen if Russia abandons its unprovoked, further aggression toward Ukraine.

Has Russia headed these calls? No. Instead, it has responded with additional actions that undermine Ukraine’s sovereignty, including mass disinformation – which we just heard again today – cyber attacks, and efforts to create a “false flag” pretext, in addition to Russia’s overwhelming military buildup of more than 150,000 troops near Ukraine’s borders.

Russia’s actions have only confirmed what we and other nations have been warning about. Other UN Member States must recognize the threat before us all today before it’s too late. Colleagues, there is no middle ground here. Calling for both sides to de-escalate only gives Russia a pass. Russia is the aggressor here.

History tells us that looking the other way is ultimately the more costly path. And we need only to look across the past decade for an indication of the path that Russia is taking. Since 2014, Russia has occupied Crimea –following its illegal invasion – and has been manufacturing and fueling ongoing military conflicts in eastern Ukraine. In recent years, including President Putin’s remarks this week, Russian leaders have claimed that Ukraine is not a real country; they have questioned its right to exist.

Russia’s actions are an unprovoked violation of international law, of Ukraine’s sovereignty and territorial integrity, and a direct contradiction of the Minsk agreements. Russia’s aggression not only threatens all of Ukraine, but every Member State and the UN itself.

Colleagues, President Putin gave us the clearest indication of his intentions on Monday, when he asked the world to travel back in time by more than a hundred years, before the United Nations even existed, to an age of empires. He asserted that Russia can recolonize its neighbors. And that he will use force – he will use force – to make a farce of the United Nations.

The United States rejects that firmly. This is 2022. We are not going back to an era of empires and colonies – or to the USSR or the Soviet Union. We have moved forward. And we must ensure, as the Permanent Representative from Kenya said in the Security Council on Monday night, that the “embers of dead empires” do not ignite new forms of oppression and violence.

Unfortunately, the fake reality Russia wants to create is already having real consequences for the people of Ukraine and for the world. To date, Russia’s war in eastern Ukraine has already killed more than 14,000 people. Nearly 3 million Ukrainians – half of whom are elderly people and children – need food, shelter, and other life-saving assistance. And, of course, ordinary Russians should be asking how many Russian lives Putin is willing to sacrifice to feed his ambitions.

If Russia continues down this path, it could – according to our estimates – create a new refugee crisis, one of the largest facing the world today, with as many as 5 million more people displaced by Russia’s war of choice and putting pressure on Ukraine’s neighbors. And because Ukraine is one of the world’s largest wheat suppliers, especially for the developing world, Russia’s actions could cause a spike in food prices and lead to even more desperate hunger in places like Libya, Yemen, and Lebanon.

The tidal waves of suffering this war will cause are unthinkable.

And then there’s the broader threat: that Russia’s actions upend our international system, make a mockery of the UN Charter, and call into question our most fundamental principles of sovereignty, diplomacy, and territorial integrity. Unfortunately, despite these terrible, world-altering outcomes, Russia appears determined to proceed.

Together with our partners and allies, President Biden has taken decisive actions to make the costs of Russia’s actions crystal clear. But as much as we all want Russia to de-escalate and choose the path of peace, that is not our choice to make. This is President Putin’s war of choice. If he chooses to escalate further, Russia and Russia alone will bear full responsibility for what is to come.

What we can do together today is make clear that Russia will pay an even steeper price if it continues its aggression. That responsible countries do not bully their neighbors into submission. That former empires cannot lay claim to sovereign and independent nations.

The very first line of the UN Charter states we are uniting together, quote, “determined to save succeeding generations from the scourge of war.” This, right here, right now, is a moment. It is a moment when we can save this generation, and the next, from that terrible fate.

Colleagues, now is not the time to sit on the sidelines. Now is the time to get off the sidelines. Let us together, show Russia that it is isolated and alone in its aggressive actions. Let us stand fully behind the principles of sovereignty, political independence, and territorial integrity for Ukraine, and for all Member States.

Let us show Russia that every other UN Member State believes it is time to de-escalate, to come back to the negotiating table, and to work toward peace so that Ukrainians can live in security, and the tenets of the UN Charter can be upheld for future generations to come.