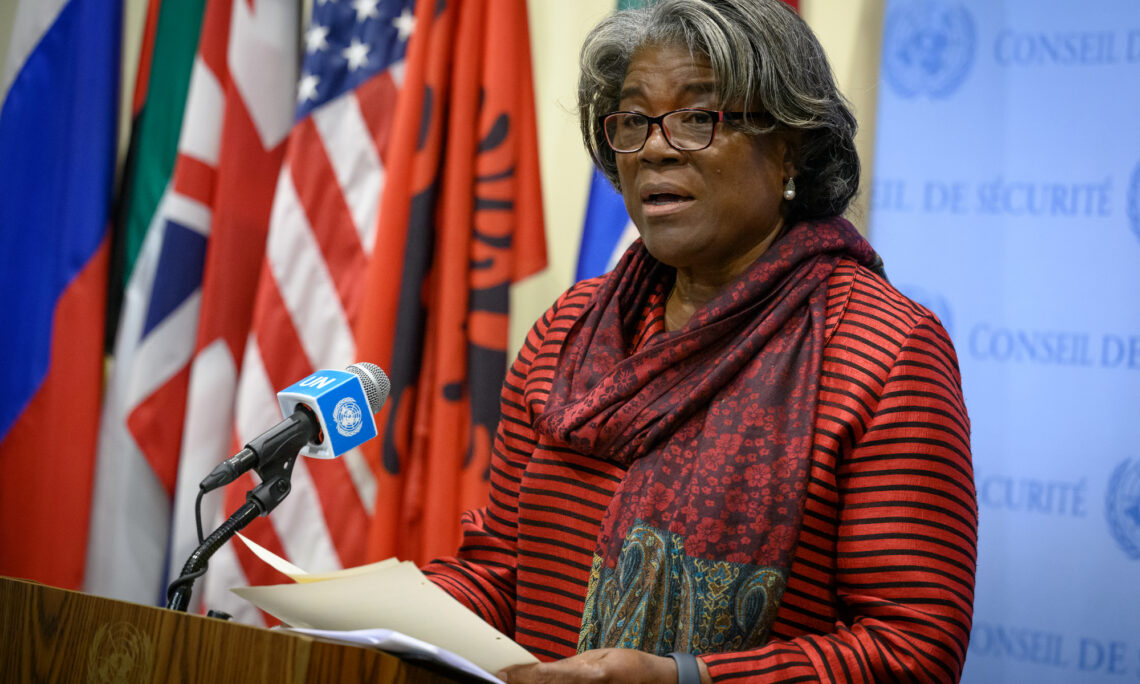 Let me thank all of you for waiting to see us this afternoon.

Not a single country voted with Russia. Not one. You cannot go door to door, hold people at gunpoint, and force them to vote for your sham referendum. You cannot seize another UN Member State’s territory by force and call it your own.

You also just saw Russia, once again, shield itself from accountability and responsibility by using the veto. This is not surprising, but it is a disgrace to this institution. It’s an insult to every Member State that has signed on to the UN Charter.

For our part, the United States will never, ever recognize any territory Russia attempts to seize or allegedly annex as anything other than part of Ukraine. As you heard from Secretary Blinken today, the United States, and our allies and partners, made clear that we would impose swift and severe costs to those who attempt to illegally change the status of Ukrainian territory.

And we will also continue to pursue accountability here at the United Nations. We are moving to the General Assembly where every country has a vote. In the General Assembly, the nations of the world will say loud and clear: It is illegal, and simply unacceptable, to attempt to redraw another country’s borders through force. It goes against everything – everything – the UN stands for.

Putin has miscalculated. He is partying in Red Square and giving provocative speeches, convinced that the world will let him tear up the UN Charter and do as he pleases. But he is sorely mistaken.

The United Nations was built on an idea: that never again would one country be allowed to take another’s territory by force. And I still believe in that idea. The United States still believes in that idea. And I am confident that the vast majority of the world does too. We look forward to demonstrating that belief and reaffirming our commitment to Ukraine and to the UN Charter in the General Assembly in the days to come.

And I want to thank my colleague from Albania who joined us in submitting the resolution for being here with me today. Thank you.

QUESTION: Thank you. It’s Pamela Falk from CBS News. Ambassador, President Putin said that he will defend these new annexation – or annexed territories – with all means necessary. How do you take that threat? And what is your view of the Ukrainian application for expedited membership to NATO?

AMBASSADOR LINDA THOMAS-GREENFIELD: Putin has been threatening Ukraine and threatening the world since the beginning of their unprovoked illegal invasion of Ukraine. So I have no comment on that other than to say we will continue to hold him accountable. And to – what was your second question?

AMBASSADOR THOMAS-GREENFIELD: In terms of NATO, look, we believe in NATO’s open door policy and the 30 members of NATO, with any state that requests to join NATO, will make a determination on what will be done next. In the meantime, we will continue to support Ukraine’s effort to defend itself.

QUESTION: And the GA resolution?

AMBASSADOR THOMAS-GREENFIELD: In the GA we will be taking the resolution, and I can’t give you a timeframe but we’re working on that immediately.

QUESTION: Thank you, Ambassador, it’s [inaudible] for Stefano Vaccara, La Voce di New York. Four countries they abstained. They kind of motivated their abstention because they say that they’re in favor of peace and that this is not helping to ease the tensions. So, what do you think about the reason why they abstain?

AMBASSADOR THOMAS-GREENFIELD: You know, I –

QUESTION: – and I’m sorry, then a follow-up on that question before about NATO. Last week, the Foreign Minister of Ukraine we asked when he thinks that Ukraine will join NATO. He say is not any more Ukraine that wants, but is NATO that wants Ukraine. And if you have a comment on that?

AMBASSADOR THOMAS-GREENFIELD: First, on the four countries who abstained, I can’t explain their decisions to abstain, but I can refer you to the statements that they made in the Council. And all four of them expressed concerns about what Russia is doing in Ukraine. So their abstentions clearly were not a defense of Russia. They were not in support of Russia. And they made clear their condemnation of Russia.

And then in terms of NATO, I think my answer is the same. The 30 countries of NATO will make a determination on Ukraine’s request to join NATO. And we don’t have an answer to when that’s going to happen until that is decided upon. Thank you.

QUESTION: Ambassador, just want to confirm: So the U.S. will request to reopen the – resume the emergency session, right? Is that correct?

AMBASSADOR THOMAS-GREENFIELD: We will request an emergency session of the General Assembly.