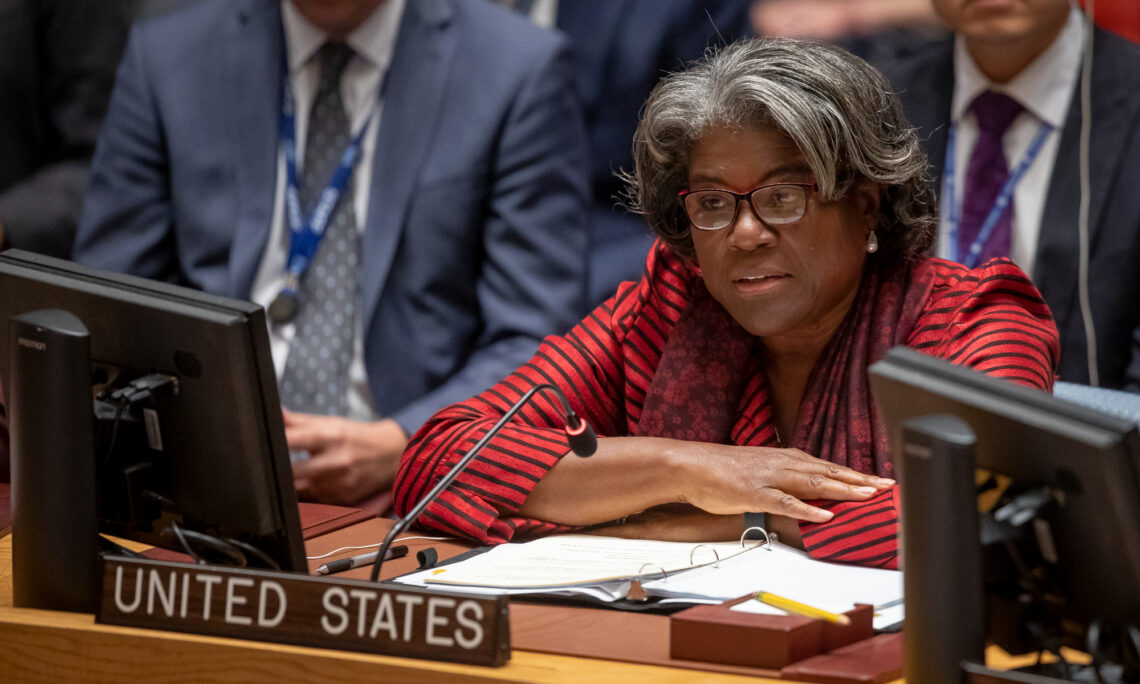 Yesterday, the Secretary-General said, “The UN Charter is clear: Any annexation of a state or territory by another state resulting from the threat or use of force is a violation of the principles of the UN Charter and international law.” That very violation is what we are confronted with today. The United States has proposed a resolution, with Albania, to condemn the illegal so-called referenda held in Ukrainian territory.

The resolution is straightforward. It condemns these illegal referenda. It calls on all states to not recognize any altered state of Ukraine. And it requires that Russia withdraw its troops from Ukraine immediately.

We have heard from many of you over the course of the past few days that you felt the process was rushed. Let me be clear: What was rushed was the Russian illegal act to annex Ukrainian territory. As a Council we had to respond.

Colleagues, this is exactly what the Security Council was made to do. Defend sovereignty. Protect territorial integrity. Promote peace and security. The United Nations was built on an idea that never again would one country be allowed to take another’s territory by force. That path, we agreed, leads to history’s most horrific outcomes. Russia’s attempted annexations are, without a shadow of doubt, exactly that. We are talking about a UN Member State, a Security Council member, attempting to annex part of another through force.

The outcomes of these sham referenda were pre-determined in Moscow, and everybody knows it. They were held behind the barrel of Russian guns. Time and time again we have seen the Ukrainian people fight for their country and their democracy. The Ukrainian civilian who removed a Russian landmine with his bare hands. The Ukrainians abroad who returned to fight for their country. The soldiers sacrificing their lives to stop Russian advances.

Putin miscalculated the resolve of the Ukrainians. The Ukrainian people have demonstrated loud and clear: they will never accept being subjugated to Russian rule. And so, the United States will never recognize any territory Russia attempts to seize or allegedly annex as anything other than part of Ukraine.

Secretary-General Guterres has said the same. He said yesterday, “Any decision to proceed with the annexation of Donetsk, Luhansk, Kherson, and Zaporizhzhya regions of Ukraine would have no legal value and deserves to be condemned.”

Let me repeat that: Deserves to be condemned.

The Secretary-General then said that it went against “the purposes and principles of United Nations. It is a dangerous escalation.”

Colleagues, we all have an interest in defending the sacred principles of sovereignty and territorial integrity. In defending peace in our modern world. All of us understand the implications for our own borders, our own economies, and our own countries if these principles are tossed aside.

This is also bigger than any one nation, large or small. It’s about our collective security. Our collective responsibility to maintain international peace and security. Not just for ourselves, but for the world. This is what this body is here to do. We are the first line of defense for the UN Charter. And we must demonstrate that we take that defense seriously. We must show that the Council can work despite the actions of one Permanent Member. This is not a moment to stand on the sidelines. This is a moment to stand up for the UN Charter, for its values, for its principles, and for its purposes.

And if Russia chooses to shield itself from accountability, then we will take further steps in the General Assembly to send an unmistakable message to Moscow that the world is still on the side of defending sovereignty and protecting territorial integrity.

Earlier today, we saw Putin celebrate this clear violation of international law. He threw a party on Red Square to pat himself on the back for these illegal referenda. He is gloating and reminiscing about the Soviet empire and stated that this was just the beginning. As we all sit in this chamber and solemnly consider this resolution, Putin is instead boastfully shoving our shared values in our faces.

It’s time we stand up to defend our collective beliefs. Together. In defense of these principles that we hold dear, the United States is putting forward this resolution with Albania. In defense of all countries to have the right to be safe from invasion and annexation, we are voting “yes.” And in defense of the world’s collective peace and security, we urge you to vote “yes” too. Let us show Putin the resolve of this Council.