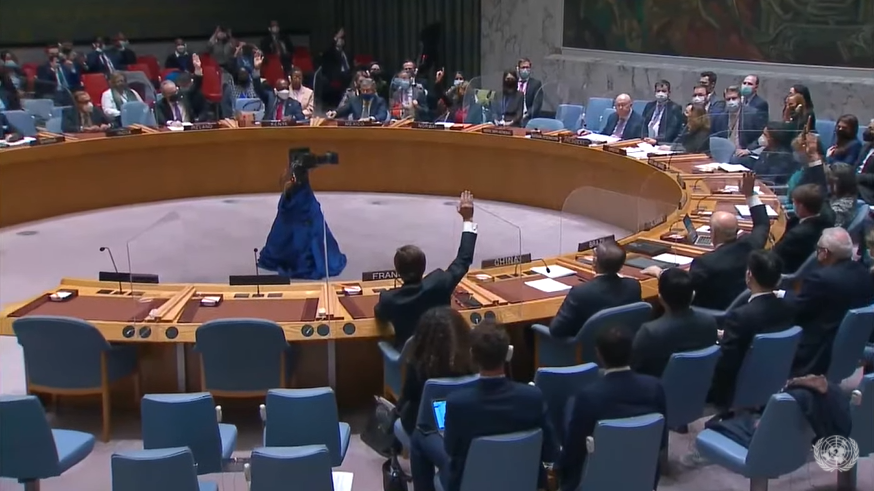 Responsible members of this Security Council have stood together today in the face of Russia’s aggression. And we will continue to stand with Ukraine, supporting it in every way we can. We are united behind Ukraine and its people, despite a reckless, irresponsible Permanent Member of the Security Council abusing its power to attack its neighbor and subvert the UN and our international system.

This vote showed which countries truly believe in supporting the core principles of the UN – and which ones deploy them as convenient catchphrases. This vote showed which Security Council members support the UN Charter – and which ones do not. We will be addressing this matter in the General Assembly, where the Russian veto does not apply and the nations of the world can, will, and should hold Russia accountable and stand in solidarity with Ukraine.

Before I conclude, I want to commend the true and tremendous courage we are seeing from the Ukrainian people. I want to thank the Ukrainian Permanent Representative who is with us here today. Earlier today, President Biden spoke with President Zelensky and personally commended the brave actions of the Ukrainian people who are fighting to defend their country. He also conveyed ongoing economic, humanitarian, and security support being provided by the United States, as well as our continued effort to rally other countries to provide similar assistance.

It’s hard to imagine what it must feel like to see tanks rolling into your city, to see bombs dropped on your streets, to see soldiers storm your parks and your gardens. But in the face of all of this, everyday Ukrainian people are taking extraordinary actions to protect their children, to protect their country, to defend everything they hold dear.

I also want to commend the courage of the thousands of people in Russia who are protesting Putin’s war, despite grave risks to their personal safety. They will keep chanting “no war.” They will keep asking how many Russian lives Putin wants to sacrifice for his cynical ambitions. As we move forward, I hope more Member States take their cues from this courage – and honor all of this bravery with more of our own.