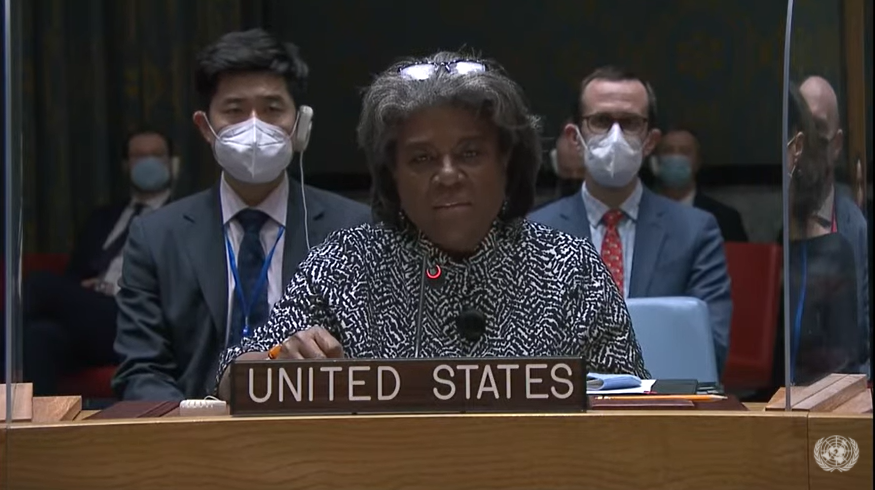 Now, all across Ukraine people are fleeing for their lives. Residents of Kyiv and Kharkiv have left their homes with only the belongings they could stuff in their backpacks to make shelter in subway stations – which have now become bomb shelters. We’ve seen reports of attacks on kindergartens and orphanages. Babies – newborn babies in an intensive care unit – have been evacuated into makeshift bomb shelters, too. We have seen heart wrenching images of fathers sobbing as they say goodbye to their young children as they send their families away to safety while they stay behind to defend their country.

In Kyiv today, thousands of people crushed into a local train station, with mothers passing their children over the crowd, begging for people to help to get their babies onto trains and to safety. According to the UN High Commissioner for Refugees, more than 50,000 people have fled Ukraine in less than 48 hours. We’ve also seen everyday Russians bravely speak out and demonstrate in cities across Russia against President Putin’s decision to plunge them into a war with their neighbor. They do not want to sacrifice Russian lives for Putin’s ambition.

This body – charged with maintaining international peace and security – was created to prevent exactly this kind of aggression from ever happening again. Russia’s latest attack on our most fundamental principles is so bold, so brazen, that it threatens our international system as we know it. We have a solemn obligation to not look away. We believe, to our core, that the noble intentions of this institution should still have a place in solving 21st century problems and shielding our children and our grandchildren from the horrors of war. The horrors of war are exactly what our Ukrainian brothers and sisters are experiencing today. The people of Ukraine will soon need food, and water, and shelter, and medical aid. They will face displacement and lose everything they have worked to build.

For these reasons, we and Albania – in consultation with our allies and partners – have proposed this draft resolution holding Russia to account for its aggression against Ukraine. This resolution condemns Russia’s aggression. It reaffirms the sovereignty, independence, unity, and territorial integrity of Ukraine. And it demands the Russian Federation to immediately – immediately – completely and unconditionally withdraw its forces. It also calls for the facilitation of rapid, safe, and unhindered humanitarian assistance to those in need in Ukraine, and the protection of civilians – including those who are humanitarian personnel.

Today, we are taking a principled stand against Russia’s aggression in this Council, but many of us are taking actions in our capitals to defend international law, including the UN Charter, and to impose severe consequences on Russia for its invasion of Ukraine. In coordination with our allies and partners, we are imposing severe and immediate economic costs on Russia. These measures include sweeping financial sanctions that will have an immediate impact on its economy and export controls that will cut off Russia’s access to vital technological inputs, atrophy its industrial base, and undercut Russia’s strategic ambitions to exert influence on the world stage. In addition, as was just announced, President Biden will be sanctioning President Putin himself, along with Foreign Minister Lavrov and members of Russia’s national security team. These actions are meant to complement the important work we are doing in the Security Council – and the resolution we have put forward today.

History will judge us for our actions – or lack thereof. And so long as we have a Security Council, I believe we ought to strive to ensure it lives up to the highest purposes – to prevent conflict and avert unnecessary war. Russia has already subverted that mission, but at a minimum – at the very minimum – the rest of us have an obligation to object and to stand up for the UN Charter.

To those who say “all parties” are culpable, I say that is a clear cop out. One country – one country – is invading another. Russia is the aggressor here. There is no middle ground. Any doubters? I say look at the kindergarten that was bombed this morning. Take a hard look. To those who say there is a “special history” between Russia and Ukraine that somehow excuses the war? I say we should all think carefully who that label might apply to next.

And as I said on Monday night, President Putin asserted that Russia has a rightful claim to all territories from the Russian Empire. And just a few hours ago, Russia threatened Finland and Sweden with “military and political repercussions.” Responsible Member States do not invade their neighbors. They do not commit violence against their neighbors just because they have the ability to do so. That is the entire purpose of our international system. That is, fundamentally, the point of the Security Council and the United Nations.

So, colleagues, this is a simple vote today. Let me put it plainly: Vote yes if you believe in upholding the UN Charter. Vote yes if you support Ukraine’s – or any state’s – right to sovereignty and territorial integrity. Vote yes if you believe Russia should be held to account for its actions. Vote no, or abstain, if you do not uphold the Charter, and align yourselves with the aggressive and unprovoked actions of Russia. Just as Russia had a choice, so do you.