Home Home | Search Results | Explanation of Vote Delivered by Ambassador Linda Thomas-Greenfield After the Vote on a U.S.-Drafted UN Security Council Resolution on the DPRK 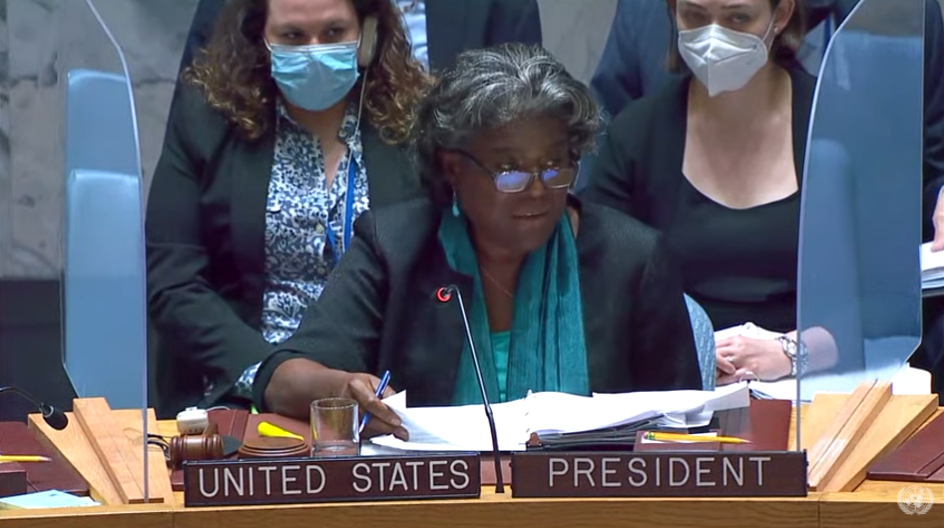 It goes without saying that this is a disappointing day for this Council. This Council has refused to take action in response to the DPRK’s unlawful launching of intercontinental ballistic missiles. I wish I could say I am surprised. We have been circulating a draft of this resolution for nine weeks. In that time, the countries vetoing this resolution have refused to engage on the text, despite our commitment to inclusivity and flexibility during consultations.

Before today, this Council had a remarkable record of consensus and collective action on this issue, going back many years. In 2016 and again in 2017, the Council unanimously responded to DPRK provocations with resolutions that impose sanctions and bring collective condemnation to a very real threat to peace and security.

Today, two permanent members of this Council chose to veto rather than act. So you may ask, what has changed?

It is not the gravity of the threat that has changed. The DPRK is still expressing intent to advance its WMD and ballistic missile program and it is flagrantly violating this Council’s resolutions by launching ballistic missiles 23 times this year alone, including six ICBM launches – a missile system that in the DPRK’s hands poses a grave threat to international peace and security, and to members of this Council.

The world faces a clear and present danger from the DPRK.

It is for that reason that 13 of us supported this resolution because it is, and it was, the right thing to do. It is not this Council’s clear mandate that has changed either. In 2017 this Council unanimously and unambiguously decided that the Council would impose further restrictions in the event of another DPRK ICBM launch.

And as I mentioned earlier, Council restraint and silence has not eliminated or even reduced the threat – if anything DPRK has been emboldened by this Council’s inaction.

It is not the dire humanitarian situation that has changed. The DPRK people are suffering, and even though the United States has offered urgent humanitarian and COVID relief to the DPRK, in good faith and independent of the lack of progress on denuclearization, those offers of assistance have gone unanswered.

As Secretary Blinken said just this morning, and I’ll quote “it’s in all of our interests to uphold the rules, norms, and treaties that have reduced the spread of weapons of mass destruction.”

So what is it? What has changed? The only thing that has changed is the refusal of permanent members of this Council to do their job.

This has resulted in the Council’s failure to fulfill its responsibilities maintain international peace and security by negotiating on this text, as well as the failure of these members to preserve the Council’s unity and credibility. These Council members have decided to shield a proliferator from facing the consequences of its actions. And they have demonstrated the worthlessness of their word by giving an explicit nod of approval to the DPRK.

The Council must stand up against the threat of WMD proliferation – whether it is by the DPRK or anyone else. And also, let me be clear, sanctions are not responsible for the dire humanitarian situation in the DPRK. It is the DPRK’s own policies of spending resources on the WMD program to the neglect of its own people. And we will continue to offer humanitarian assistance, including COVID as I mentioned earlier, the DPRK has only to accept it.

We resolve to continue to work to restrict the development of the DPRK’s unlawful WMD and ballistic missile program together with those countries who are willing to stand up for the international nonproliferation regime and who refuse to ignore the DPRK’s repeated violations of Security Council resolutions.