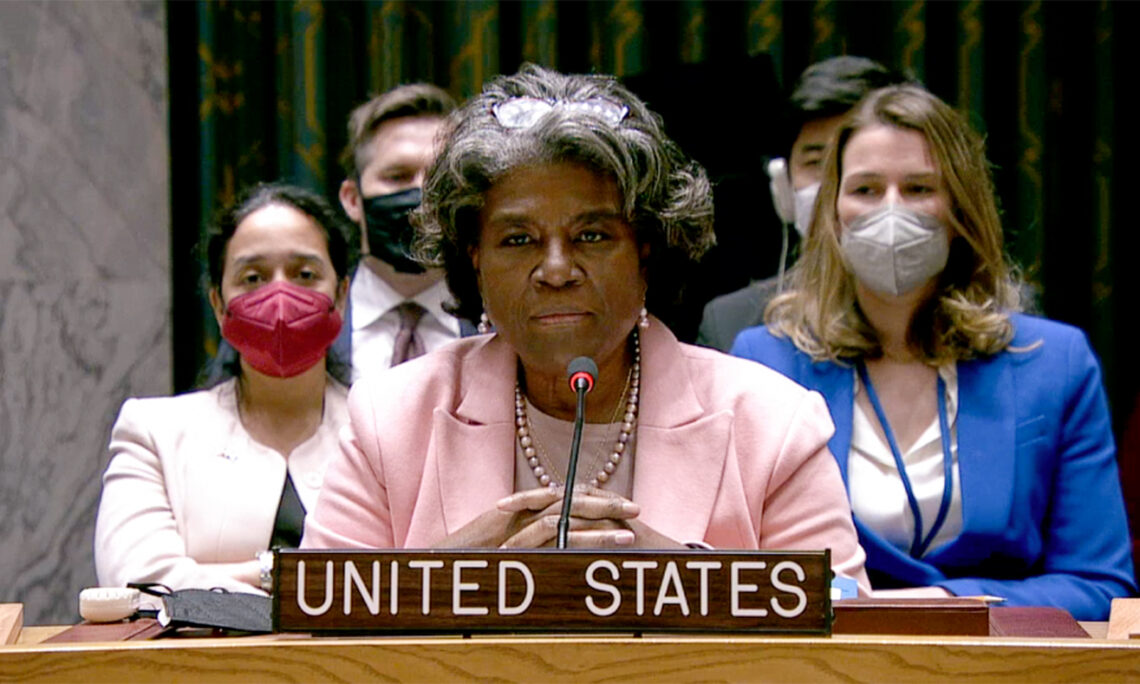 Once again, Russia is attempting to use this Council to provide cover for its brutal actions. It really is unconscionable that Russia would have the audacity to put forward a resolution asking the international community to solve a humanitarian crisis that Russia alone created.

The United States intends to abstain on this text because, to state the obvious, Russia does not care about the deteriorating humanitarian conditions, or the millions of lives and dreams the war has shattered. If they cared, they would stop fighting. Russia is the aggressor, the attacker, the invader – the sole party in Ukraine engaged in a campaign of brutality against the people of Ukraine – and they want us to pass a resolution that does not acknowledge their culpability.

We have all seen the pervasive videos of millions of Ukrainian women and children fleeing for their lives. We have seen the images of bloodied pregnant women being carried out of the rubble, including a mother and her baby who tragically died two weeks ago. We have seen the shelling of kindergartens, orphanages, and humanitarian corridors; attacks hitting apartment buildings, gas and water pipelines, and a nuclear power plant; shootings of people waiting in bread lines. We have seen cities under siege and corpses in the streets and journalists killed in the crossfire. We have seen shelling by Putin’s forces kill a 96-year-old holocaust survivor in Kharkiv, Ukraine. And if we are to believe Russia’s disinformation, these are all movie sets with actors.

And we remain deeply concerned – as we warned for the third time here yesterday – that Russia may be planning to use chemical or biological agents. Russia alone is to blame for the war in Ukraine. And mark my word, Russia will continue to be held accountable for what it is doing to the people in Ukraine.

Russia is trying to make this Council complicit in its flimsy fabrications by putting forward a resolution that makes no mention of its role as the sole cause of this crisis – and our vote will show that we will play no part of that. Russia continues to block this Council from carrying out its mandate.

The United States stands with the people of Ukraine. The overwhelming majority of United Nations Member States stand with Ukraine. Our chorus of voices is why Russia’s cynical effort to use this institution to spread disinformation and propaganda won’t work. As the vote today will show, Russia’s disingenuous efforts to deny the truth of its actions will continue to fail.

I want to thank you, Madam President, for offering a moment of silence for the amazing Madeleine Albright. And if I can end with a quote from Madeleine: Secretary Albright once warned, “Take it from someone who fled the Iron Curtain, I know what happens when you give the Russians a green light.” And that is what we will do today, if we pass this resolution.