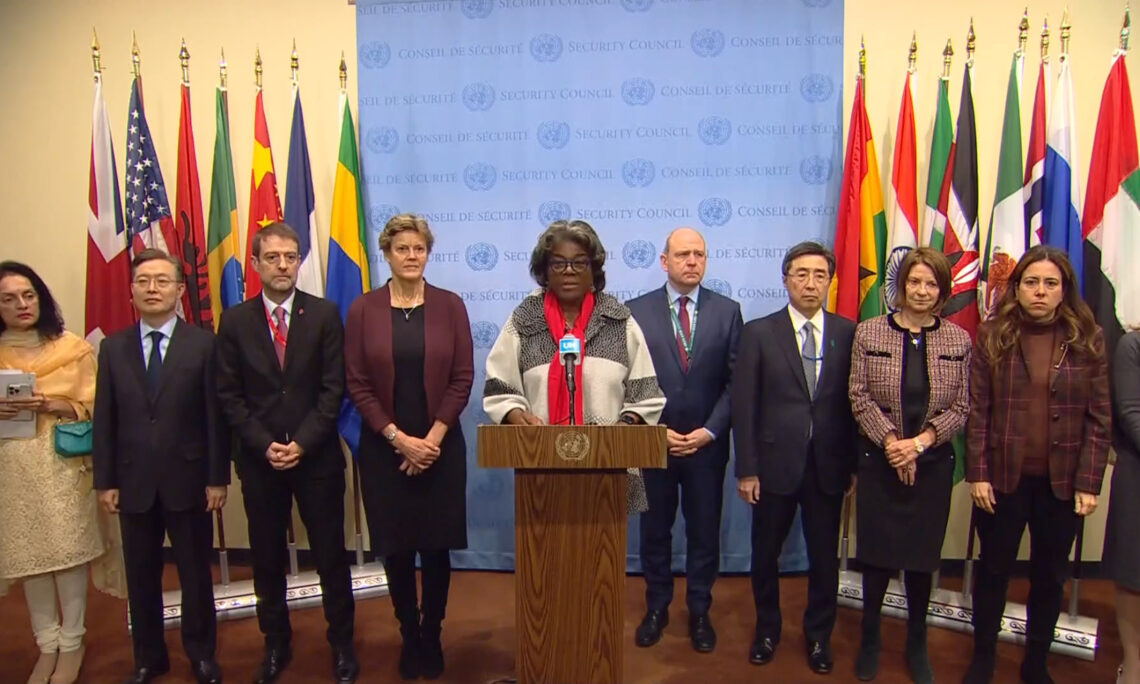 (The following is a joint statement delivered by Ambassador Linda Thomas-Greenfield, U.S. Representative to the United Nations, on behalf of Albania, Australia, Ecuador, France, Ireland, India, Japan, Malta, Norway, the Republic of Korea, Switzerland, the United Arab Emirates, the United Kingdom, and the United States.)

Good morning, everyone. Thank you for being here.

Albania, Australia, Ecuador, France, Ireland, India, Japan, Malta, Norway, the Republic of Korea, Switzerland, the United Arab Emirates, the United Kingdom, and the United States strongly condemn the DPRK’s intercontinental ballistic missile launch of November 17 that landed about 125 miles from Japan’s coastline, as well as the subsequent report in the DPRK’s state-controlled media that it could be used for a preemptive nuclear strike.

This was DPRK’s eighth intercontinental ballistic missile launch this year. Compared with the total number of intercontinental ballistic missile launches prior to 2022, this represents a serious escalation and poses an unequivocal threat to international peace and security. The DPRK is acting with impunity in the face of the Security Council’s inaction.

All of us at this podium support the need for the Council to condemn the DPRK’s actions with a unified voice and to take action to limit the DPRK’s unlawful weapons of mass destruction and ballistic missile advancement, especially as it relates to nuclear missile technologies in the DPRK, the region, and beyond. We invite all Member States to join us in condemning the DPRK’s unlawful ballistic missile launches and call for full implementation of the existing Security Council resolutions. We also urge the DPRK to abandon its unlawful weapons programs in a complete, verifiable, and irreversible manner.

We remain committed to diplomacy, and to that end, encourage the DPRK to halt its threatening behavior in violation of multiple Security Council resolutions, and to engage in meaningful dialogue toward denuclearization.