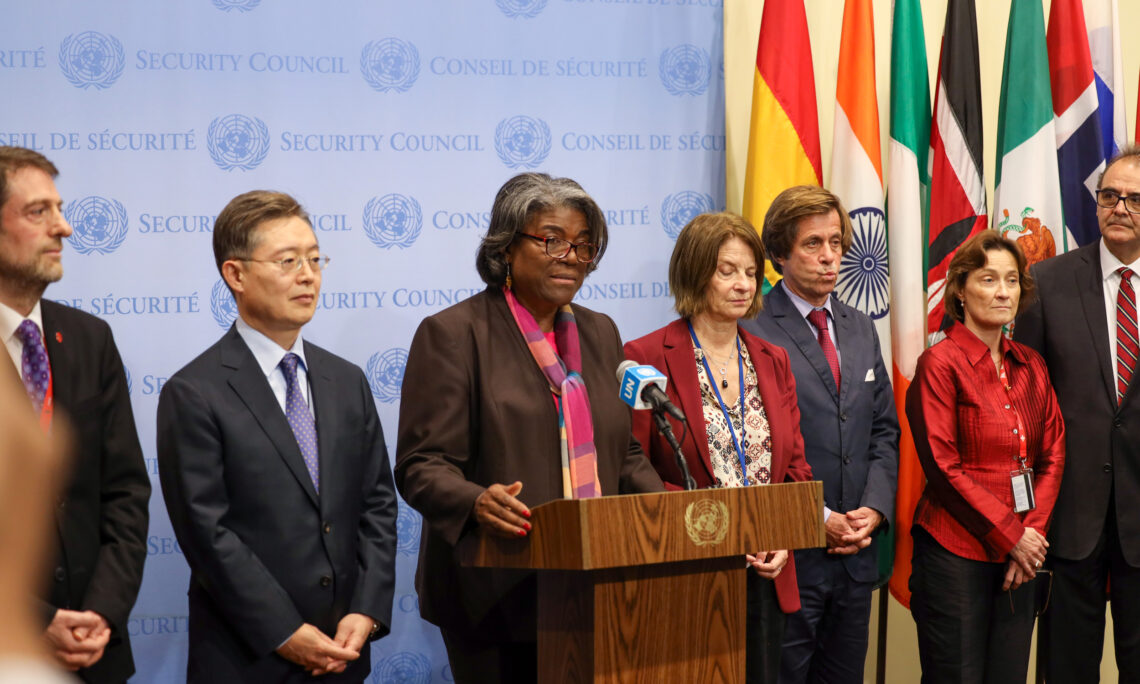 The following is a joint statement delivered by Ambassador Linda Thomas-Greenfield on behalf of Albania, Ecuador, France, India, Ireland, Japan, Malta, Norway, the Republic of Korea, Switzerland, the United Kingdom, and the United States.

Albania, Ecuador, France, India, Ireland, Japan, Malta, Norway, the Republic of Korea, Switzerland, the United Kingdom, and the United States strongly condemn the DPRK’s recent series of missile launches, which included an assessed intercontinental ballistic missile launch on November 2 and the reckless launch of a ballistic missile that impacted a mere 57 kilometers from the Republic of Korea.

The DPRK has now launched an unprecedented number of ballistic missiles in 2022 – more than double its total in any previous year. These are blatant violations of multiple Security Council resolutions. The DPRK’s launches pose a threat to not only the region, but to the international peace and security of the entire international community.

We remain committed to diplomacy and continue to call on the DPRK to return to dialogue. We stand here together, however, in solidarity against the DPRK’s efforts to undermine the global nonproliferation regime and threaten the international community. We stress the importance of addressing the proliferation of nuclear and missile technologies related to DPRK in the region and beyond. And we continue to call on the DPRK to abandon its unlawful weapons programs in a complete, verifiable, and irreversible manner.

We call on all UN Member States to join us in condemning this destabilizing behavior and urging the DPRK to abandon its unlawful weapons programs and engage in diplomacy toward denuclearization. We also call on Member States to fully implement the relevant Security Council resolutions. Let us reaffirm that full implementation of the 1718 Committee mandate is necessary to effectively impede the DPRK’s unlawful weapons of mass destruction and ballistic missile advancements.

This latest ICBM test is a test of the Council’s resolve. Council unity is crucial in the face of this advancing threat.