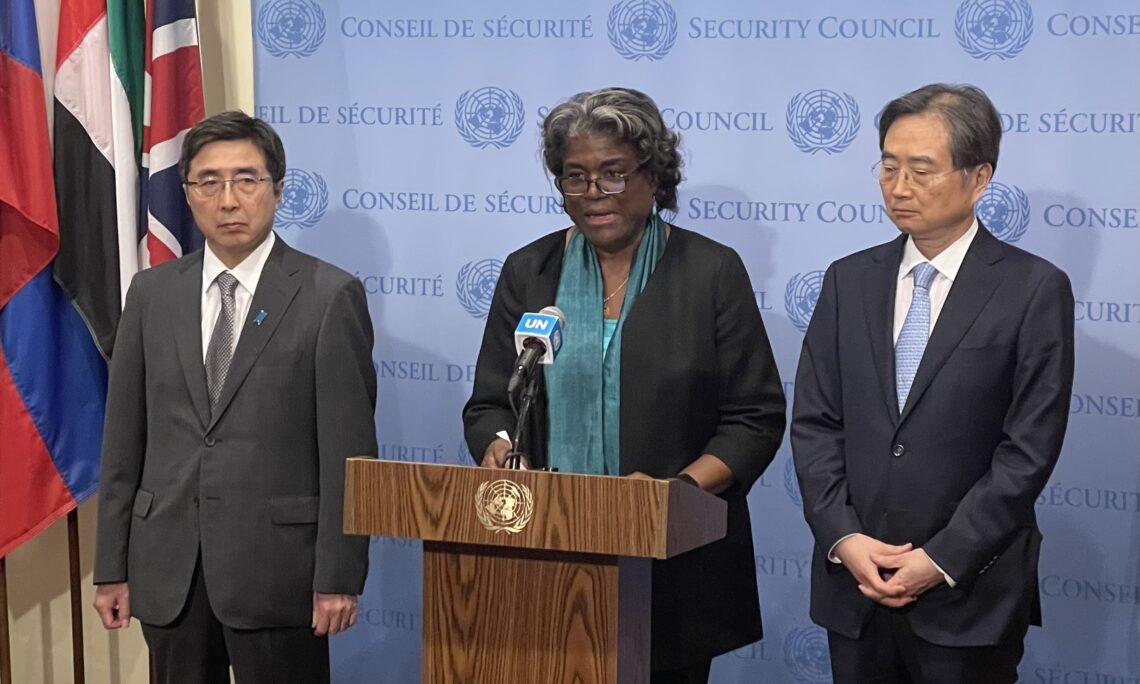 United States Mission to the United Nations
Office of Press and Public Diplomacy
For Immediate Release
May 26, 2022

Joint Statement Following a Vote on a U.S.-Drafted UN Security Council Resolution on the DPRK

(The following is a joint statement delivered by Ambassador Linda Thomas-Greenfield, U.S. Representative to the United Nations, on behalf of Japan, the Republic of Korea, and the United States.)

I’d like to make a statement on behalf of Japan, the Republic of Korea, and the United States in our national capacities.

For the first time in 15 years, a UN Security Council member has used a veto to stop the Council from fulfilling its responsibility to hold the DPRK accountable for its unlawful proliferation and tests. The vetoes today are dangerous. Those members have taken a stance that not only undermines the Security Council’s previous actions to which they’ve committed, but also undermines our collective security.

The most recent intercontinental ballistic missile tests served to highlight that the DPRK’s priorities still lie in its unlawful WMD and ballistic missile development, at the expense of the plight of its people.

These tests are dangerous. They are destabilizing. They are a clear violation of multiple Security Council resolutions and seek to undermine the global nonproliferation regime. They pose a threat not just to the DPRK’s neighbors, but to the entire world.

This must stop. Through the recent visit of President Biden in the region, we, three countries, reaffirmed our unwavering commitment to the complete, verifiable and irreversible denuclearization of the DPRK in accordance with relevant Security Council resolutions. We urge the DPRK to invest in its people instead of its destabilizing weapons. We urge the DPRK to address the dire COVID-19 situation and engage in diplomacy instead of threatening the world.

The failure to adopt a new resolution undermines the Security Council’s previous actions to which they’ve agreed unanimously, and will only embolden the DPRK to conduct further provocations.

This Resolution was an opportunity to restrict the DPRK’s unlawful WMD and ballistic missile advancements while also helping to improve the humanitarian situation of the people of the DPRK. Unfortunately, the bottom line is that we missed this very opportunity because of the decision of two.

We resolve to work together to protect our countries, region, and the world from the DPRK’s continued and unprovoked escalations and repeated violations of international law.