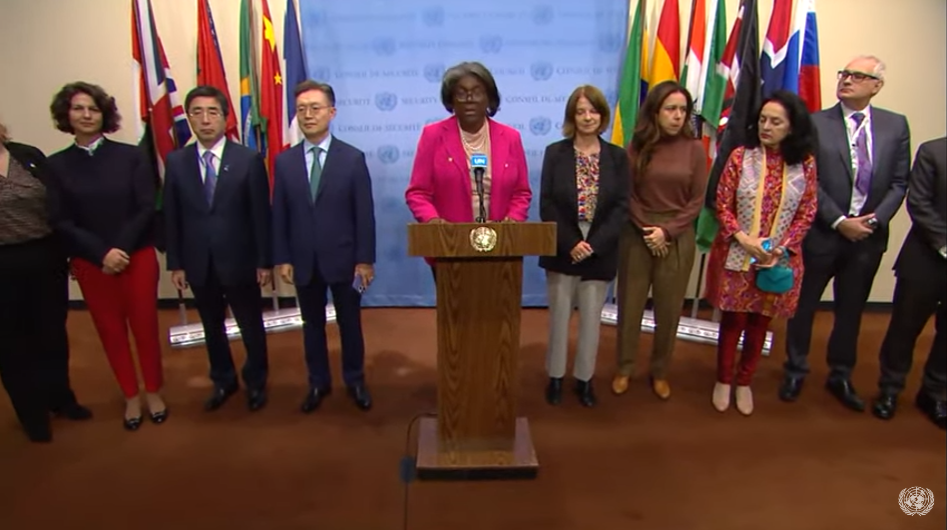 (The following is a joint statement delivered by Ambassador Linda Thomas-Greenfield, U.S. Representative of the United States to the United Nations, on behalf of Albania, Brazil, France, India, Ireland, Japan, Norway, the Republic of Korea, the United Arab Emirates, the United Kingdom, and the United States.)

These launches violate multiple Security Council resolutions and pose a threat to not only the region, but to the entire international community.

The United States, and those who have joined me at the podium today remain committed to diplomacy and continue to call on the DPRK to return to dialogue. But we will not stay silent as the DPRK works to undermine the global nonproliferation regime and threaten the international community.

The DPRK made its intentions clear in April and September when its leader signaled an effort to accelerate the DPRK’s nuclear and ballistic missile programs and even alluded to pre-emptive use of nuclear forces. We are witnessing the DPRK’s pursuit of this objective.

We call on all UN Member States, especially Council members, to join us in condemning this reckless behavior and in urging the DPRK to abandon in a complete, verifiable, and irreversible manner its unlawful weapons programs and engage in diplomacy toward denuclearization. We also recall the Council’s decision in Resolution 2397 referring to further significant measures.

We call on Member States to fully implement the relevant Security Council resolutions. Let us reaffirm that full implementation of the 1718 Committee mandate is necessary to effectively slow down and restrict the DPRK’s weapons advancements.

Following the DPRK’s provocations and escalatory behavior in 2017, the Council came together and unanimously took action to hold the DPRK accountable for its unlawful actions.

Now again the DPRK is testing the Council’s resolve and we must act accordingly.

The Council will continue to engage over the course of the next week to find a unified voice and way forward.